Analysts are onsite in Honolulu while players, casters, and crew are spread across the globe

It has been wild ride for Activision Blizzard Esports’ Broadcast Technology Group during the 2021 Overwatch League Season. After producing OWL regular-season matches online and from Project Aloha in Honolulu using its cloud-based, remote-production model, the Group had been prepping for the OWL Playoffs in Dallas and Los Angeles, its first live, in-person matches in more than two years. However, when the Delta variant of COVID-19 hindered those plans, the Broadcast Technology Group pivoted quickly for a return to Honolulu to broadcast the playoffs, which conclude with tomorrow’s OWL Grand Final. 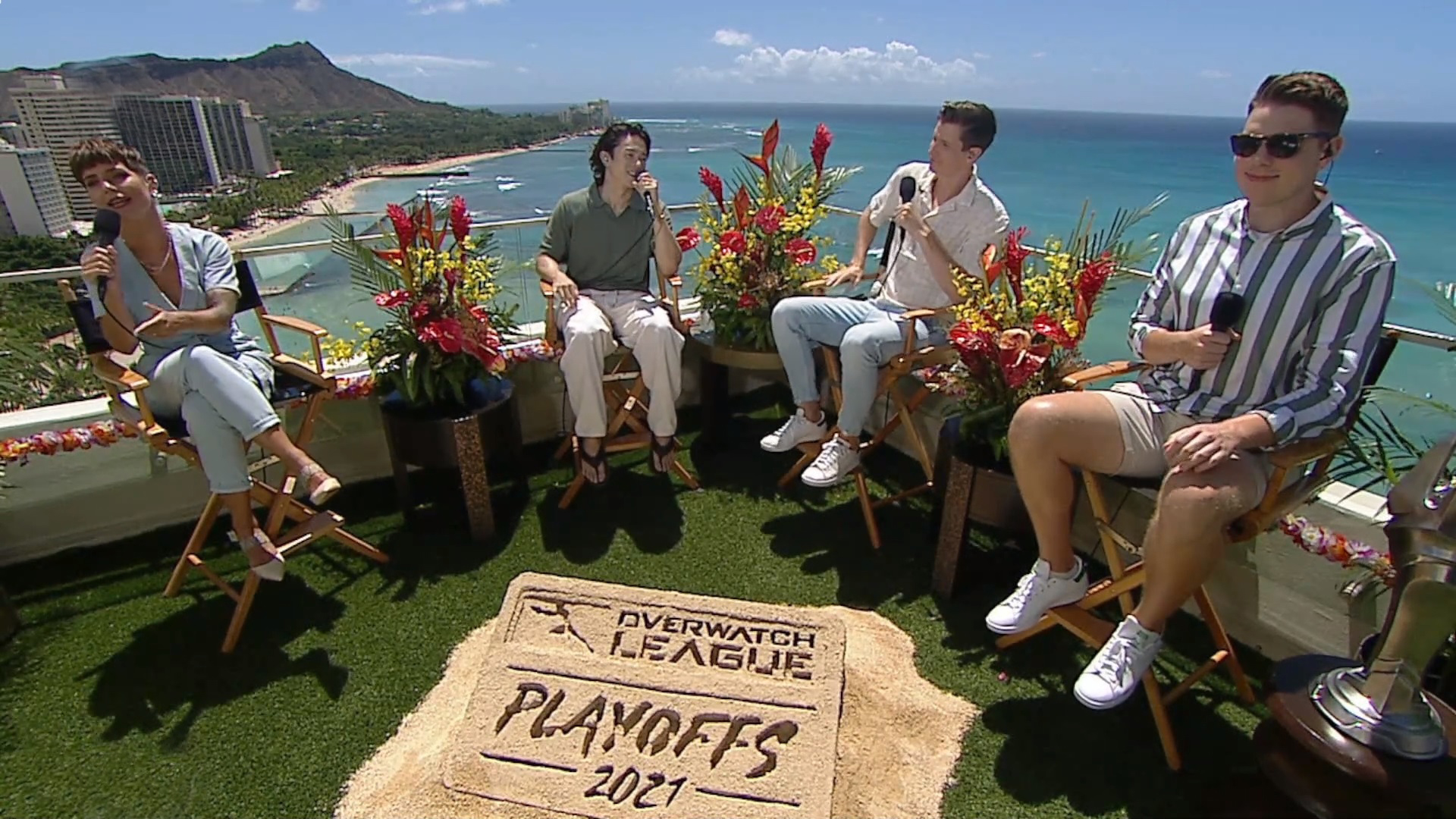 The OWL Playoffs feature analysts on-site in Honolulu manning a set at the Moana Surfrider Resort.

“When the [in-person events] were canceled, we had only about two weeks to pivot the entire show,” says Corey Smith, director, live operations, Broadcast Technology Group, Activision Blizzard Esports. “The fact that the team was able to get it done was nothing short of a miracle. We simply wouldn’t have been able to do it without the cloud and all the work we had already put in to develop [remote workflows]. We couldn’t have been orchestrating trucks and satellite uplinks and coordinating fiber drops in that small of a window. We just didn’t have the time to turn around that traditional type of infrastructure. We had to do it with cloud production.”

Project Aloha: A Unified Champion Thanks to Hawaii-Tokyo Connection

After being forced to have regional champions in Asia and U.S./Europe last year because of travel restrictions and transcontinental bandwidth challenges, Tomorrow’s OWL Grand Finals will crown a unified global champion for the first time since 2019. 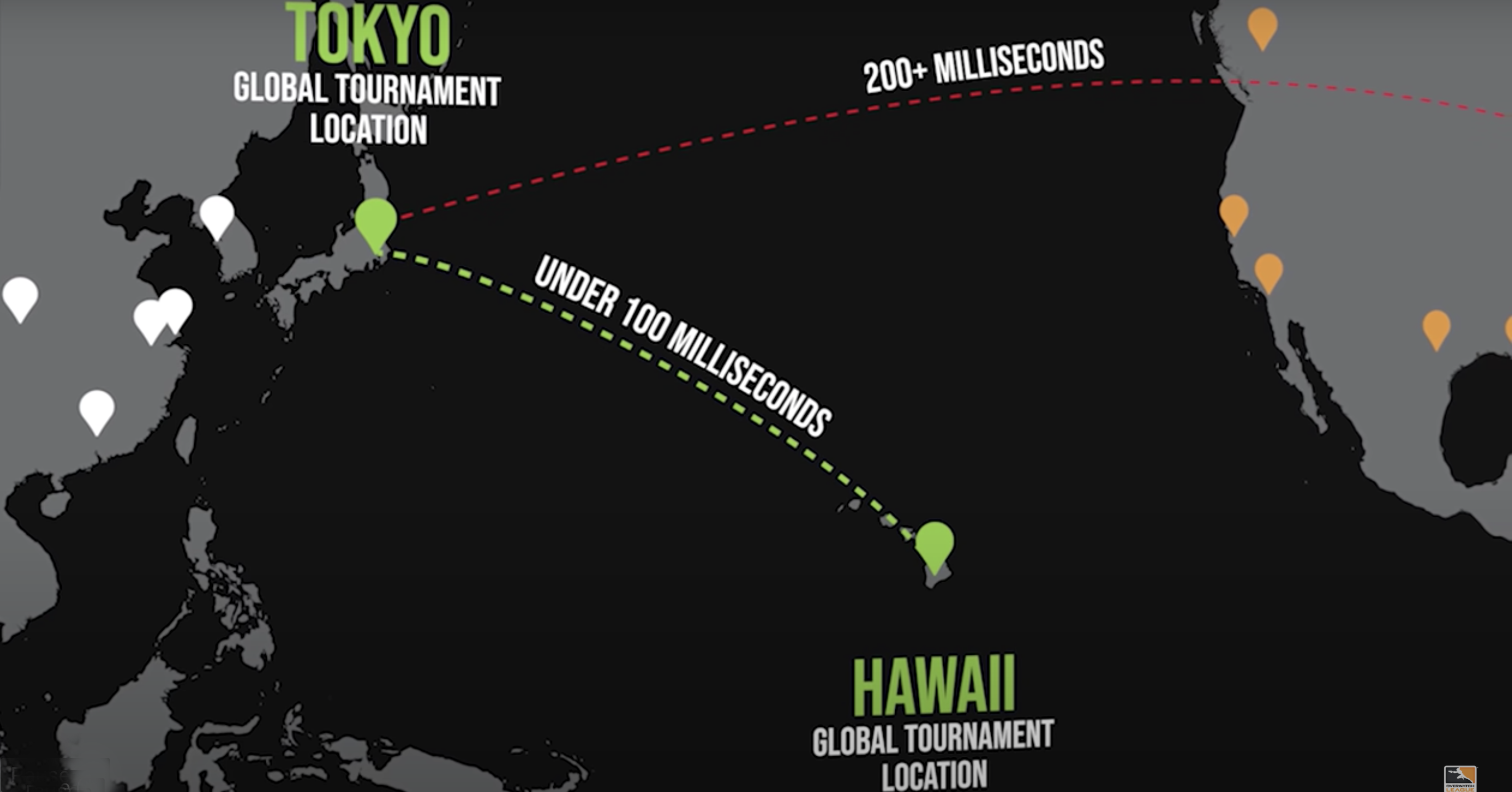 To pull this season off, Activision Blizzard Esports (ABE) partnered with the University of Hawaii Mānoa to launch Project Aloha, a competition model in which teams could compete live between Honolulu and Asia. The university provided access to a high-capacity trans-Pacific subsea fiber cable between Tokyo and Honolulu, allowing players to compete online with near-zero latency.

“Project Aloha allowed us to combine the teams from North America and Asia for competitive matchmaking, which was great because we weren’t able to do that last season,” notes Smith. “We obviously didn’t want to end this season again by crowning separate champions in Asia and North America, so Hawaii allowed us to conclude the season in a way that made sense.

During this week’s OWL Playoffs, for the first time at Project Aloha, analysts are located onsite in Honolulu, delivering live coverage during broadcasts from its set on the balcony of the penthouse suite at the Moana Surfrider Resort. 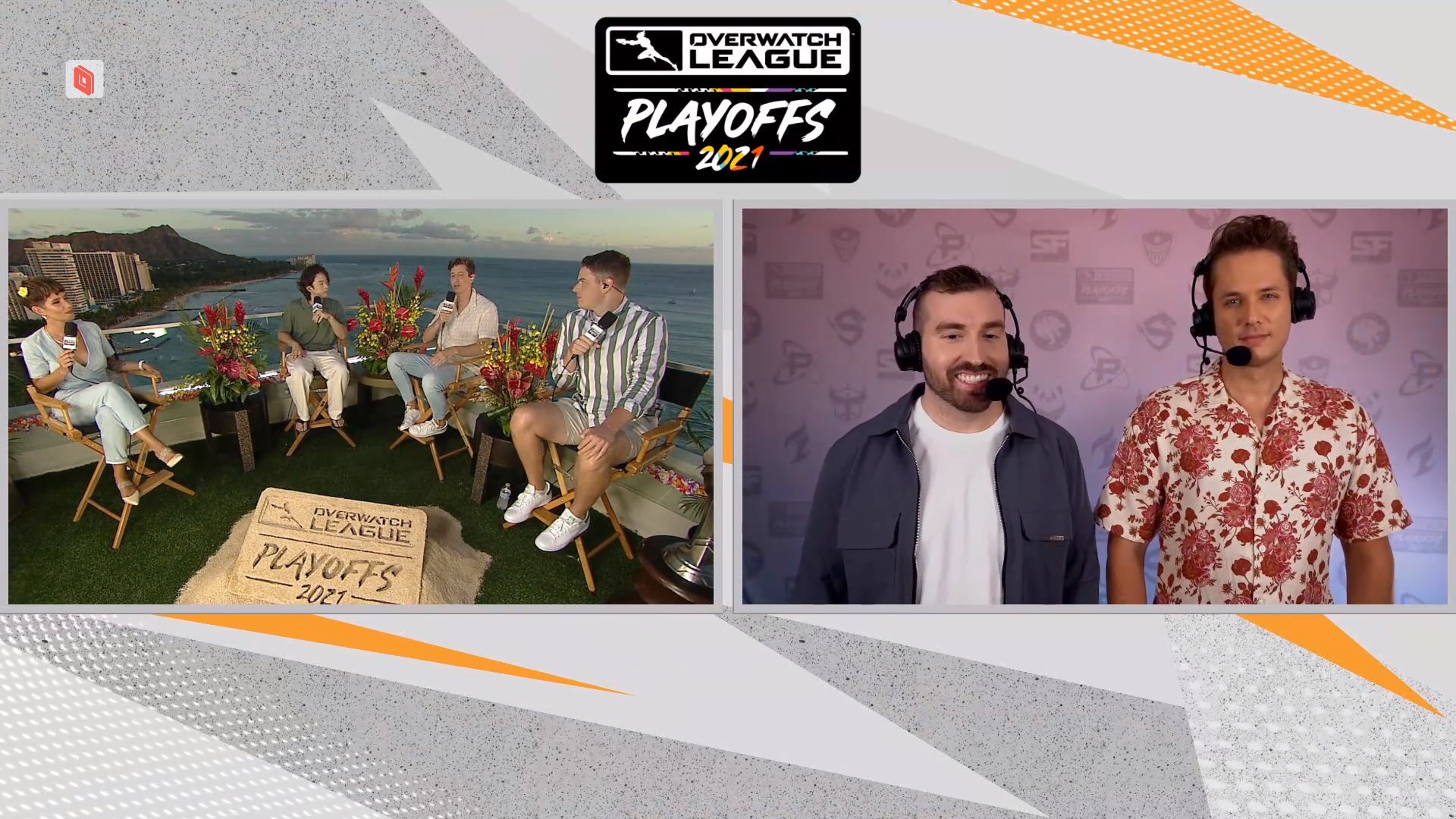 “The big challenge here for the set was connectivity at the top of the Moana Surfrider,” says Senior Technical Manager Ryan Cole, one of the few crew members onsite in Honolulu. “[The hotel] cannot support the network at the level and scale we needed at the penthouse, so we ended working with the Marriott folks and some onsite vendors to setup two point-to-point [wireless bridges] from different locations around the island to the suite to get the network connectivity we needed. And it has been going really well.”

A small crew is also on hand in Honolulu: the production team manning the Moana Surfrider set and the competition room at the UH Mānoa, four editors located at the Sheraton Waikiki, an ENG team shooting behind-the-scenes content with the teams, and IT and operations staff. UH Mānoa students are also playing a role in the productions and getting hands-on experience in a live-esports-broadcast environment. 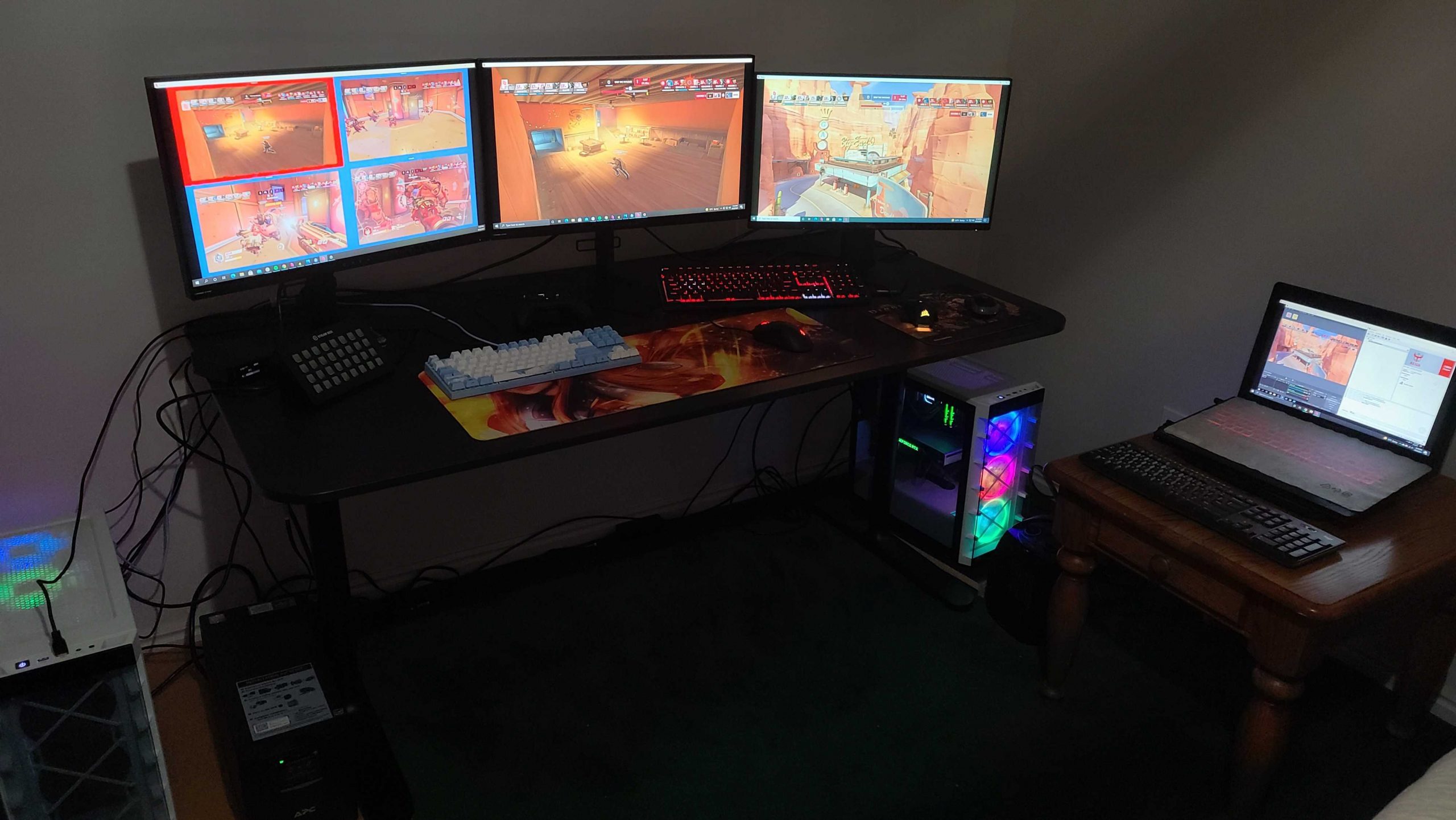 OWL observers remote into cloud-based VMs in both South Korea and Los Angeles.

“We’re focused on making this feel like it’s truly a Grand Finals and not just another Overwatch league show,” says Smith. “We’re upping the scale of the show as much as possible. We owe it to the teams, the players, and the community that’s watching to polish it up and do whatever we can do to entertain them in a new and different way.”

Spanning the Globe: How the Cloud Brings It All Together

Nearly the entire production team, meanwhile, remains remote and continues to use ABE’s cloud-based production workflow. This production model allows the production crew and casters to continue to work entirely from home, from locations across the mainland U.S., Hawaii, South Korea, and China. 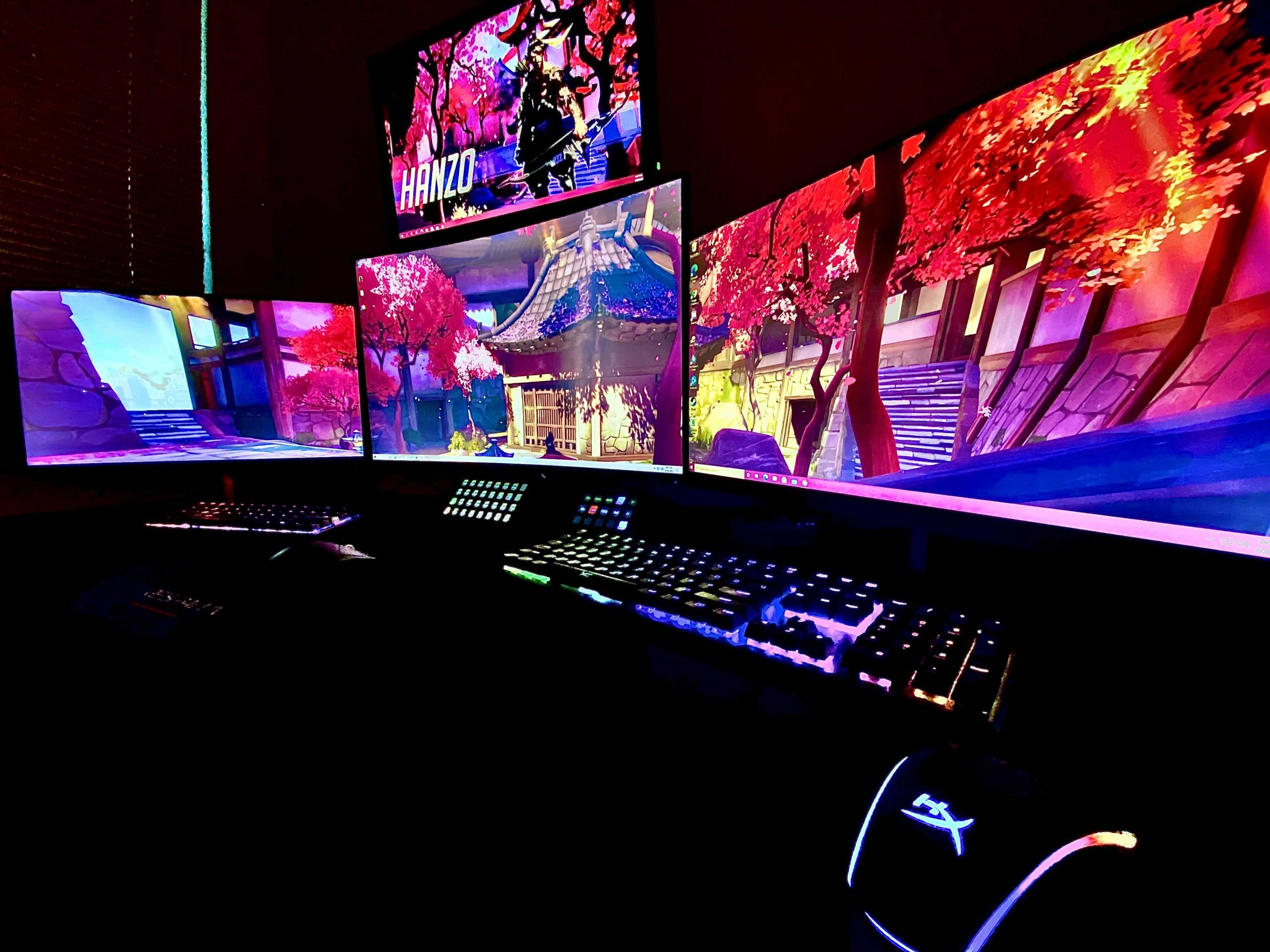 The cloud production ecosystem is built around vMix live-video-streaming software and uses software-based Unity intercom, Viz Trio graphics in the cloud, and Parsec remote-desktop software. ABE also created its own master-control platform — dubbed Echo — which can distribute multiple regionalized feeds with different graphics and commercial insertion for each region.

Observers — the “camera operators” who cut the in-game action and are integral to the broadcast — remote into cloud-based VMs in both South Korea and Los Angeles, which provide them with ultra-low-latency connections. 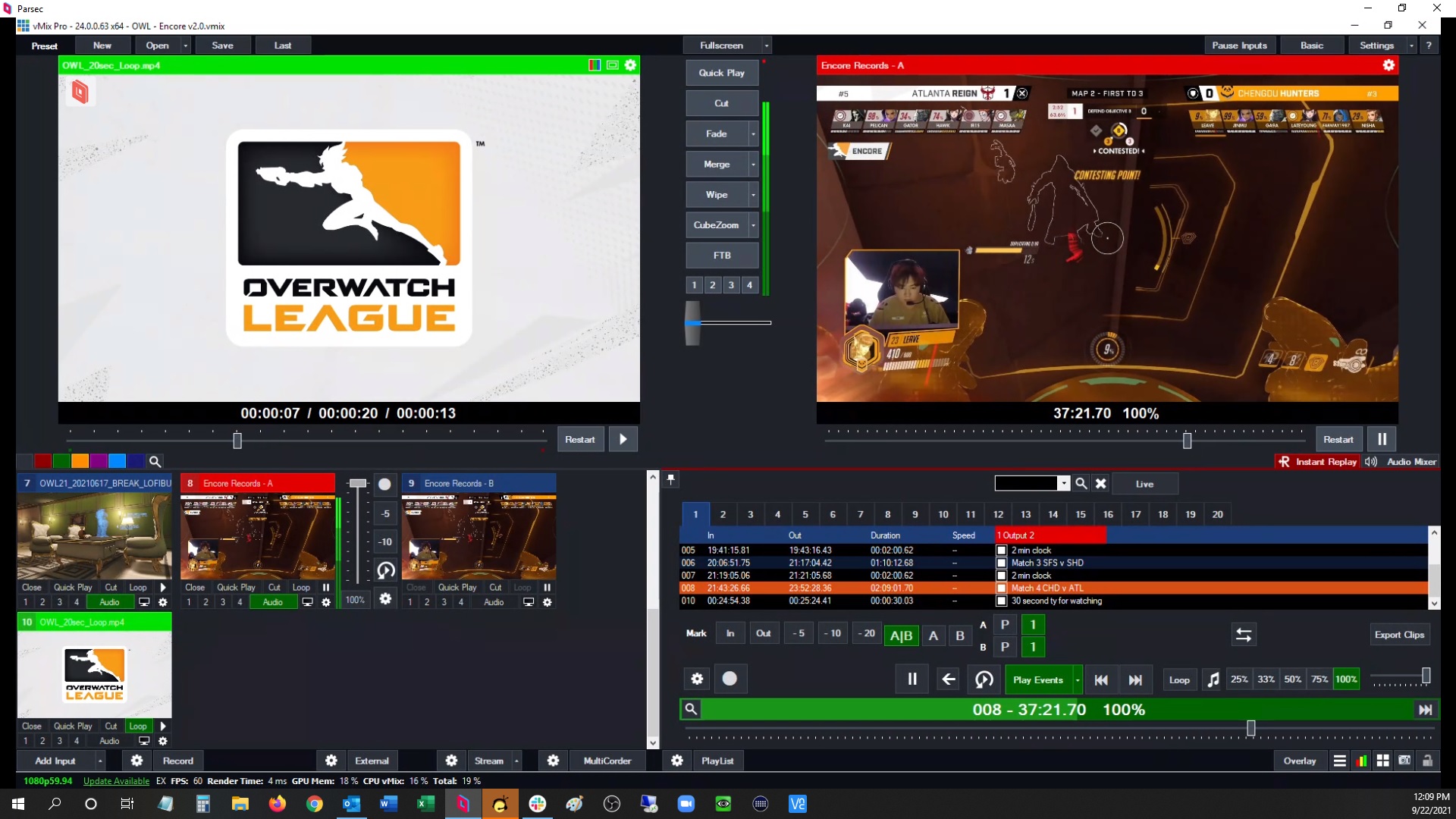 In a first for OWL in the pandemic era, casters are calling the action together in the same room during the playoffs — with one pair in Los Angeles and one in Austin. Previously, casters were calling the action separately from their homes and were integrated into the broadcast via a virtual set. 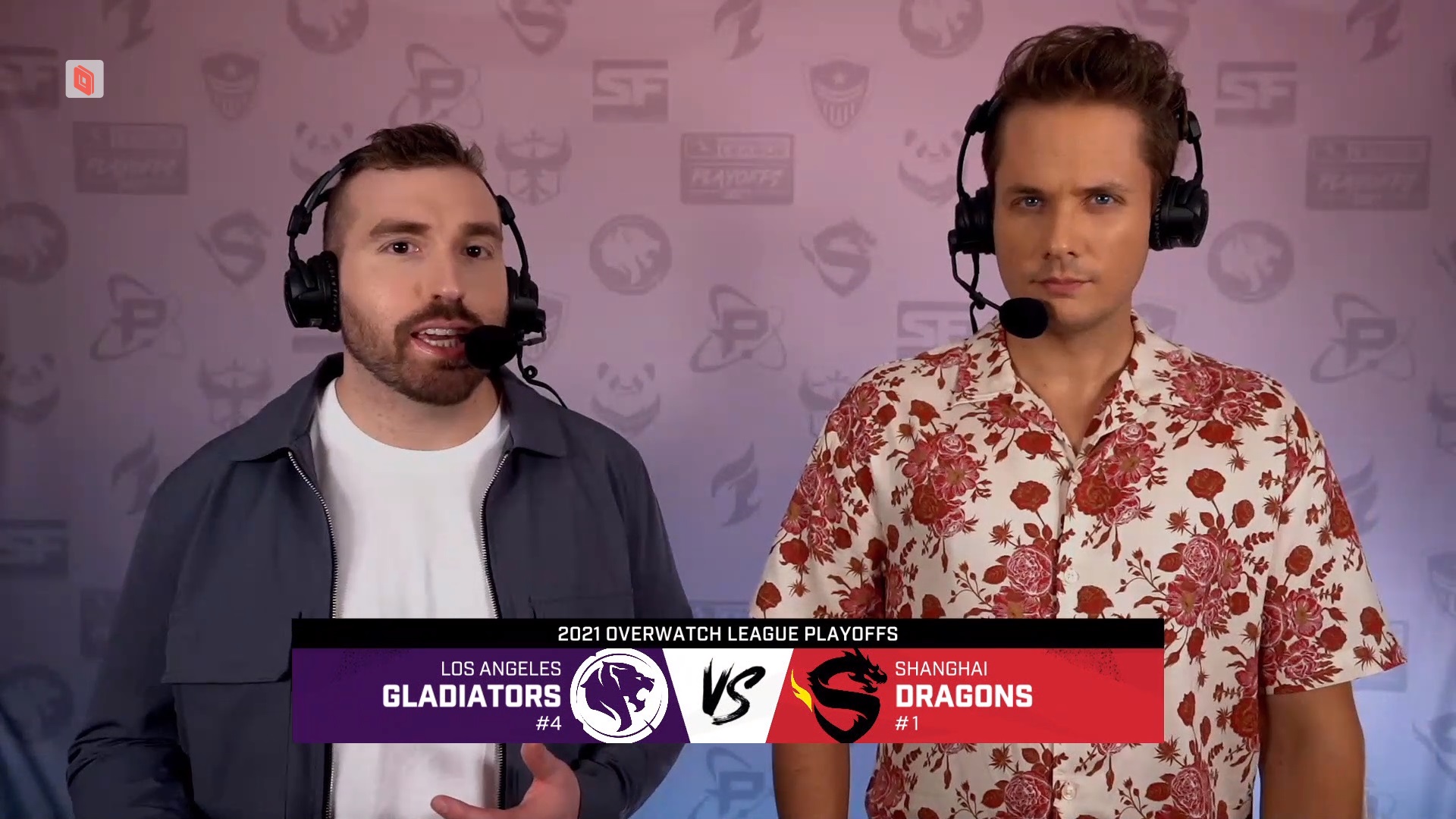 For the first time in the pandemic-era, OWL broadcasts feature casters calling the action together from the same location.

In addition, the analysts in Honolulu conduct interviews with individuals all over the world throughout the live broadcasts. 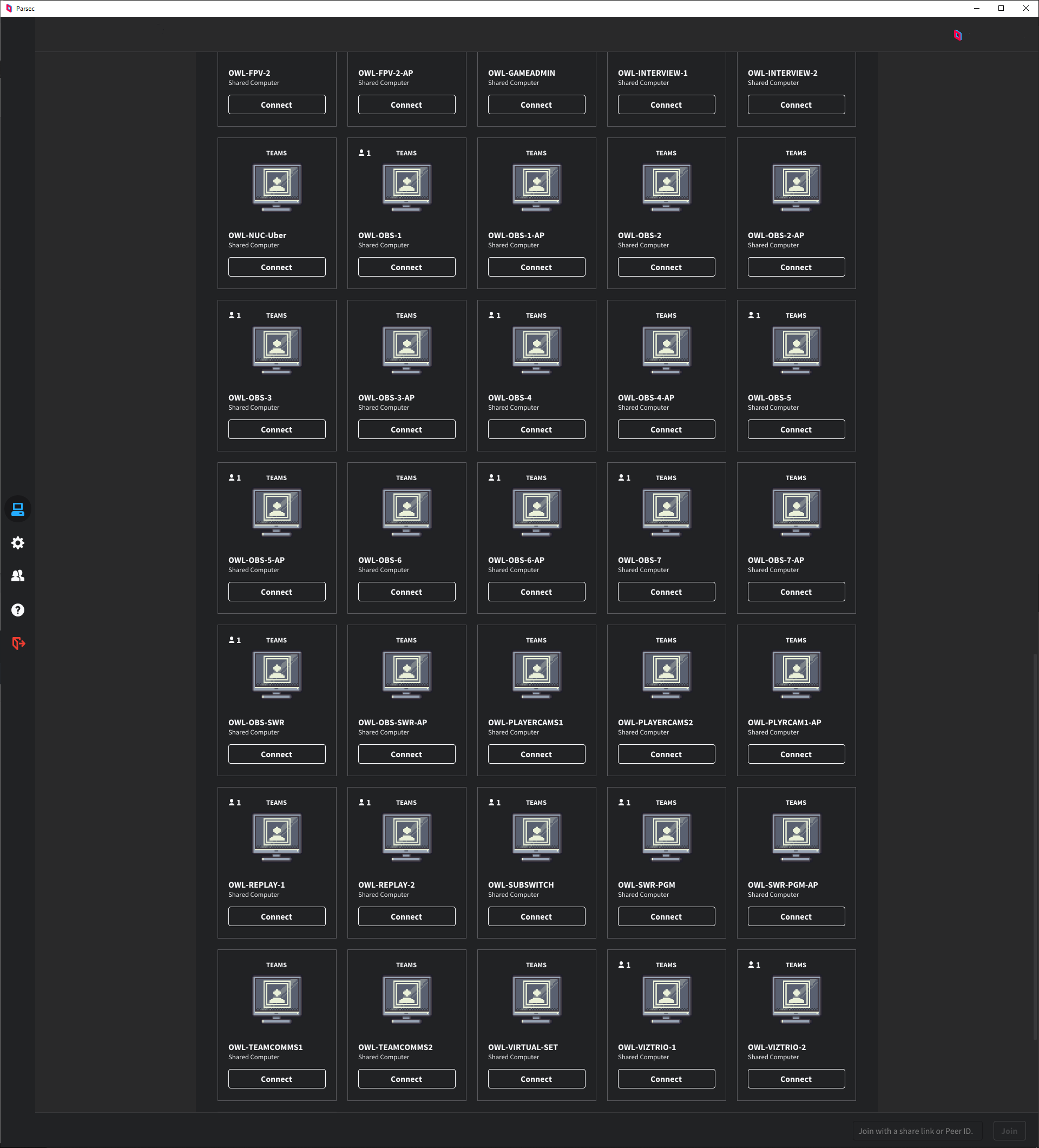 “This has been a truly global show,” says Cole. “We’re bringing all of these international components into a single broadcast, which we’ve never done at this scale before. We’re obviously very familiar with cloud, but, when you start adding all these other locations, it becomes that much more complicated because now you’re coordinating with people on the ground halfway around the world. But it’s coming together quite nicely.”

According to Smith, the most significant challenge for the multisite production was synching the timing of all the different feeds — both local and in the cloud — from around the globe. To account for this, the technical team timed every feed to a uniform delay and then would work through it on the production side from there.

“All of the different feeds that are coming through have been retimed to some degree because the casters have to be able to hear themselves and hear each other,” says Smith. “The timing of all of that is just one giant mathematic problem that we had to solve in order to avoid any lip-sync issues or timing problems when cutting video. That was a massive hurdle that we had to overcome.”

Looking Ahead: Hopeful for a Return to LAN Events, GV AMPP on the Horizon

With the 2021 OWL season soon to be in the rearview mirror, Activision Blizzard Esports is optimistic about returning to in-person events at traditional venues next year — hopefully, venues filled with fans. With that in mind, the ABE Technology Broadcast Group is looking at how to integrate its now ubiquitous cloud-based workflows into onsite events.

“Right now, we’re trying figure what we need to do in order to make this all work for when we get back to [in-person] venue shows in 2022,” says Smith. “Hawaii is giving us a blueprint for how this will all look when we roll back to that hybrid production model and [in-person] events.

“When we go back to venue-based shows, that doesn’t mean we’re just going to kill off all the cloud-production [workflows] and go back to trucks. For us, trucks are simply no longer cost-effective because we can do all this production work in the cloud with a small crew onsite. There’s not a world in which we’re going to go back to traditional television broadcast; it’s just not effective for us.” 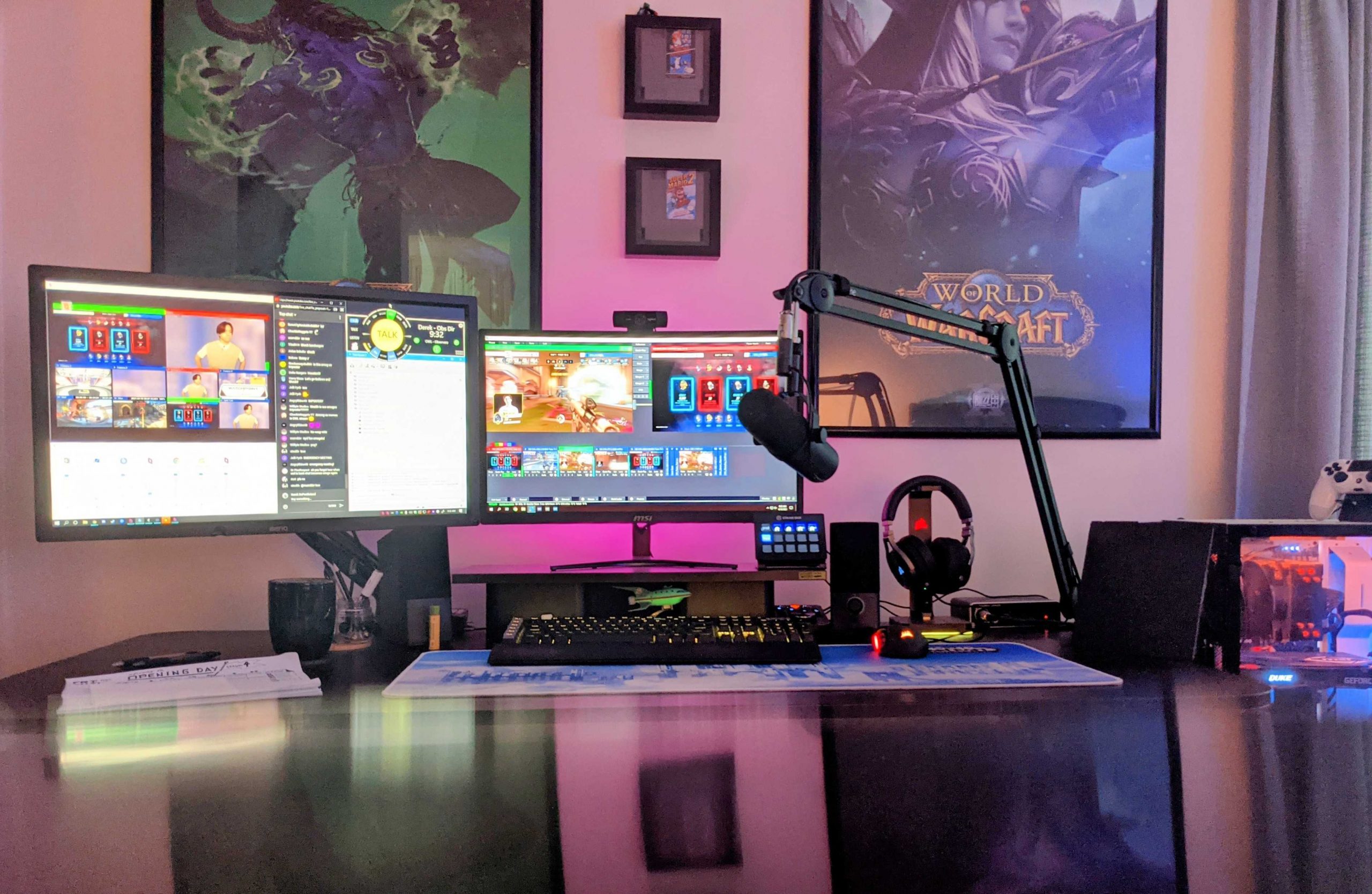 Observers – along with the majority of the crew – continue to work remotely from home.

Smith adds that the team is currently working with Grass Valley to enhance the GV AMPP (Agile Media Processing Platform) cloud-based SaaS production solution and leverage it for OWL and Call of Duty League productions in 2022.

Cole notes that the agility that the cloud provides opens up a whole new range of possibilities: “The nature of the cloud has allowed us to be very agile with our workflows. When you think about it, all we need for a show are a couple of small-scale switchers, cameras, and a lot of PCs. Everything else is in the cloud. It has given us an outlook on the future where we can definitely make things happen at a drop of a dime.

“During the pandemic,” he continues, we’ve basically said there’s no challenge that we can’t tackle. No matter what the challenge is, we will find a way to solve it.”