Ross Production Services (RPS) is Ross Video’s full-service production division that produces between 150-200 events a year, including live sports and esports content. Alongside working for major US broadcast and cable networks, it recently handled the production of EA’s Madden NFL 21 Championship Series from its Connecticut facility, completed during the pandemic. 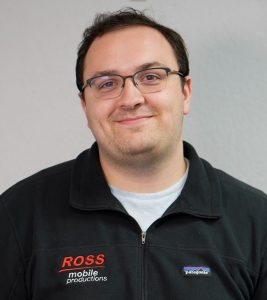 What’s your role with RPS?

I’m the Technology Manager and my role is to design and develop the workflows and to decide what technology will be needed for each production. Being owned by Ross Video, our first preference is obviously to use Ross equipment. The majority of all the equipment we use is Ross, with exceptions like Clear-Com for intercom and Calrec for audio. We handle the production for all kinds of live sporting and entertainment events, including esports, and the productions we manage can be seen on pretty much every linear channel here in the States.

What OB units and studio facilities do you currently operate?

We currently operate eight mobile production trucks. We have eight six-camera Sprinter vans and a large 12-camera 40-foot truck. Last fall, we finished building a new studio facility in Connecticut. This facility is our main production hub and handles a wide variety of high-profile content for customers in sports, esports and live entertainment.

With most of the equipment you use made by Ross, why turn to Calrec for audio?
Calrec is the industry standard for quality audio and prior to working with the company and installing its technology we were lacking in the audio department. We made our first purchase of two Calrec Brio consoles about two years ago and they are fitted in two of our Sprinter OB units. About seven months ago we acquired a 72-fader Apollo and two more Brios, this time for our Connecticut facility. A couple of months or so back, we purchased another Brio, this time for our large OB truck.

Prior to using Calrec, one of the biggest problems we faced with the consoles we were using was the lack of a simple workflow. We could always do what we needed, but it wasn’t straightforward. With Calrec it is, and that’s important. Another key factor was the power and small form factor of the Brio. Space in the Sprinter vans is always tight – after some quite dramatic re-engineering, we managed to fit a Brio and this solved a very big problem for us.

Tell us about your recently built facility Connecticut.
The Connecticut facility was built during the pandemic here in the US which, of course, has its own challenges! We have developed what we call “the production cloud”, which although hardware-based, allows contributors to remote into the facility.

This methodology has served us well when it comes to esports productions. We operate four control rooms – A, B, C and D – and we’ve been using control room A for EA Sports shows, including EA Sports’ Madden NFL 21 Championship Series. We used a Brio for the first six weeks of production and then switched to the Apollo when it was installed. Our operators loved the Brio. When we switched to the far larger console, our main operator was a little apprehensive at first, but Calrec provided very efficient remote training and any apprehension quickly disappeared.

For EA Sports’ Yard Invitational event, we used both a Brio and the Apollo, connected using Calrec’s Hydra2 technology and MADI. This highlights another reason why we decided on Calrec and that’s how hyper-connected the consoles can be. For this show, we had two A1s and a very fast turnaround between 10-minute virtual games with four players each. As well as mixing all the normal audio required for commentators/hosts etc. we also had all the player mics and game feeds, and these had to be sub-mixed on a Brio before being sent to the Apollo, which would then take over that overall mix. The Brio A1 would then start mixing the next game because of the very tight turnaround. It was a tough challenge, but I feel we rose to the occasion. 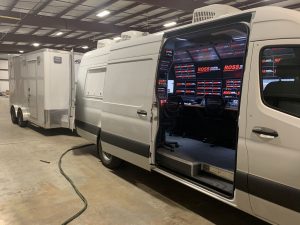 What are the networking advantages of using Calrec?
We’re using Calrec’s Hydra2 network and MADI interfaces for all of our connections. The ability and ease with which we can share resources is fantastic. With Hydra2, our consoles can be connected to any studio at any time and any feed can be controlled by any desk. Each of our control rooms has its own dedicated router and each router sends its MADI to a single I/O box, meaning that each console can be used by any studio; there’s no limitation. The only reason we’re not doing AoIP right now is because we’re in a growth phase with Ross Production Services, and our MADI/Hydra2 setup is a great ecosystem for us to be in at the moment. Our operators love it, and it cuts down on busy work for them.

Another key thing to highlight is that the Ross routing and AV processing platform we use – the award-winning Ultrix – allows us to embed/de-embed every source that comes into the router, so MADI is the most efficient protocol to move signals in/out of that platform.

What type of connectivity do you have in your 40-foot truck and your two sprinter vans with the Calrec consoles in them?
Again, we use Hydra2 with MADI in conjunction with Ultrix routing. We have two MADI feeds from the router into the audio mixer and then we use two of the Brio I/O boxes. We’ve developed what we call Fiber Kits for our trucks. We have two per truck and they contain a Hydra2 box, IFBs, intercom and video in/out. We deploy these in our shows whether it be in the booth or in the field, wherever we need to. Hydra2 is very important in that workflow. In our big truck we’ve actually provisioned for three kits.

You’ve mentioned some of the major advantages of Calrec. Would it be fair to say that you are “standardizing” on Calrec going forward?
Yes. In my opinion, the Calrec ecosystem is the preferred one for us to be in. Our operators love it, and we have a lot less of what I consider “busy work”. In our case, this means the engineer having to work with the A1 to get their work done because the console isn’t a Calrec and/or the workflow isn’t easy. With any of our future trucks we will look to install a Calrec desk, either a Brio or an Apollo. Those are our favorite consoles right now.