You See a Hole; Larry ‘LJ’ Cirillo Hears a Sound

It has become axiomatic that multichannel audio has been very, very good for loudspeaker manufacturers, with 5.1 requiring three times as many speakers as mere stereo. But what has not been as apparent is how good multichannel audio is for microphone makers. Illustrating the axiom are the 22 microphones deployed around a single hole on the Island Green at the Players Championship Tournament at Sawgrass Stadium Course in Ponte Vedra Beach, FL.

The 17th hole there is basically surrounded by a formidable moat and may be the most loathed and feared green in all of professional golf. Now it’s also surrounded by microphones.

“The Island Green is constructed with railroad ties, and I place 10 Sennheiser 816 long shotguns alongside them,” says Lawrence “LJ” Cirillo, who has spent most of a 35-year career capturing effects for golf broadcasts. “The 816s have become my ‘water’ mics for capturing the splashes when the balls hit the water. And this extends to the 16th and 18th holes, too. When the wind is blowing hard, it’s carnage.” 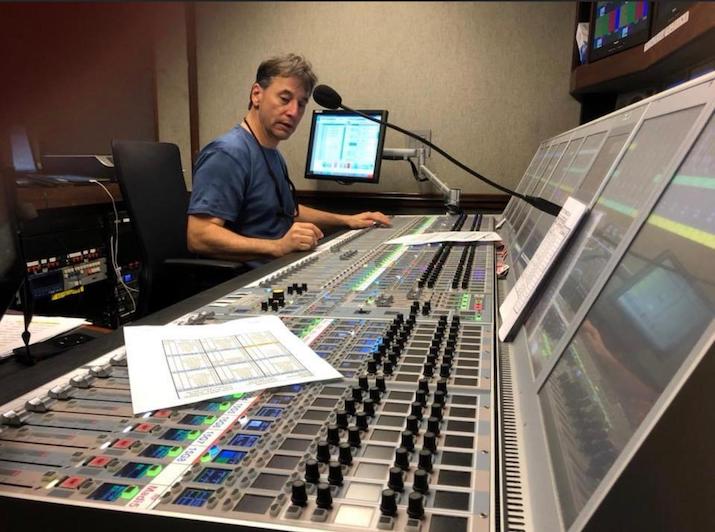 Larry Cirillo sets up the console early in the week before the start of the tournament.

He also sets out as many as three crowd microphones, capturing audience sounds from the sides and the rear of the action, including on a “stadium” hill near the green. His most recent acquisitions are Audio-Technica’s new BP28L low-noise large-diaphragm condenser shotgun mic, which he first encountered at the 2020 Tokyo Olympics, which took place in 2021 due to the pandemic. Two of the BP28Ls are used as “landing” mics, picking up the plop of the ball as it hits the green, a role they play in his kit, he says, including for such events as the Senior PGA Championship, the U.S. Women’s Open, the recently concluded U.S. Open Championship, and the Women’s PGA Championship.

“I look at a golf course as 18 little stadiums,” he explains. “The microphone deployments need to reflect that. During COVID, when crowds were banned, people watching on television got to hear more of the intimate sound of golf: the conversations between players and caddies, and even more detail of the sound of shots and landings, like the crispness of the sound of the ball going into the water or the ‘clump’ of the club when it’s dropped in the sand of a bunker. When the ball goes into a bunker or the rough or the water, that’s golf’s equivalent of a car crash in NASCAR. No one wants it to happen, but, when it does, they want to hear the details.”

Microphones placed strategically around the course remain the primary way to capture those sounds. Cirillo says professional golfers on tour continue to object to wearing a wireless transmitter.

“They’re OK with it for celebrity events, like Tiger and Phil,” he says, referencing the November 2018 unofficial PGA event between Tiger Woods and Phil Mickelson and similar subsequent events held under The Match rubric. “But golfers just don’t trust being miked for sound during tournaments. So we have to keep being clever about how to get microphones closer to them and the action.”

And it’s not just the microphones. Cirillo says adroit processing of the audio is often necessary: for instance, using EQ to carve out the desired sound, such as golfer/caddie conversation, from a dense audio landscape that includes other voices, crowd sounds, and nat sound like airplanes, birds, wind, and the multiple generators used to power corporate and VIP tent suites.

“You have to use processing and microphone choices together to get what you need,” he says. “That’s why I was so happy get hold of those BL28L shotguns. It gets me around the wind noise and the ‘Ryder Cup roar’ like other shotguns can’t.” 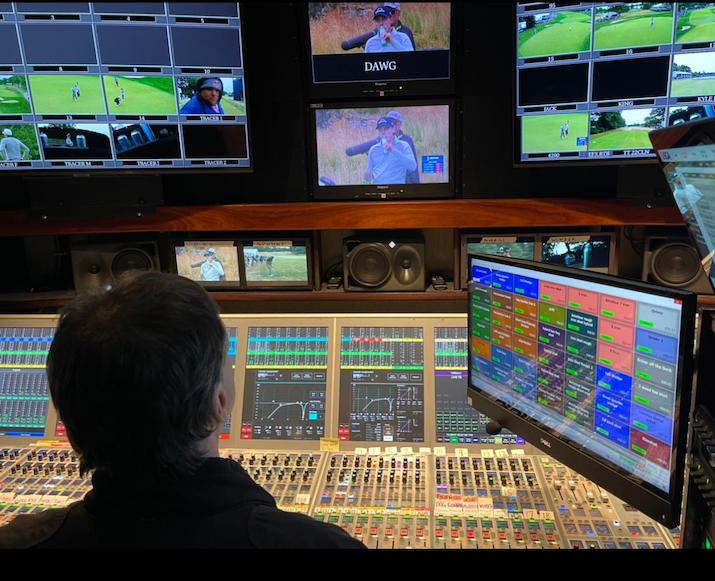 Aboard NEP ND7 C at the U.S. Open, the two screens in the center of the display show a mic operator hiding behind the player and holding a zeppelin housing an A-T BP28L shotgun mic.

“I’ll treat a par-3 hole differently,” he says. “There’s going to be more conversation going on at the T-box as golfers and caddies figure out which clubs they want to use for shorter drives. Plus, each day, the yardage can get changed, and the wind can be different. That prompts a lot of conversation.

“I start with a pair of mono shotguns opposite each other at a little less than a 45-degree angle to create an X-Y pattern,” he continues. “Even if golfers are standing 5 or 6 ft. back, I can still grab that conversation. But I have to mono the shotguns so ball-hits are not so much of a left-right effect.

“I also have a crowd mic set up on the T-box for the people behind the box cheering the shot as it goes away. On the green, I’ll use at least two landing mics, left and right, and microphones aimed at the bunkers, too, for the landing sounds and the sound of someone hitting out of the bunker. On a par-3, I don’t have the benefit of a mic [operator] nearby with a wireless microphone; they’ll be out on the fairways. And I’ll have at least two crowd mics, so I can get the main crowd and another set of spectators, which gives you some variation for the rear channels of the 5.1 array.”

Cirillo plans to eventually replace all his landing mics with the BP28L, in an effort to duplicate the sonic panorama he had for the Olympics, which he considers a benchmark for broadcast-golf sound.

“I like to think that a lot of what I’ve done over the last 35 years has helped changed the way golf sounds on television,” he says. “You always want to make it better.”