Live From MLB All-Star 2022: Fox Sports To Deploy Mics Everywhere for the Game

Miking players is a main focus again this year

Everyone looks for more audio from the baseball field. That includes Joe Carpenter, A1 for Fox Sports’ production of tonight’s MLB All-Star Game at Dodger Stadium.

“We’re trying to get more players to wear microphones, but we still encounter resistance,” says Carpenter, who, as a fan of the sport, is familiar with both the practical and the supernatural reluctance to pin on a lavaliere. “I get it; they can be a bit superstitious. But there’s tremendous entertainment value in hearing an outfielder talking with Joe Davis or John Smoltz in the booth. We will get some of that, but how much we never know until game time. The players’ union does not give any kind of blanket permission to mike up players.” 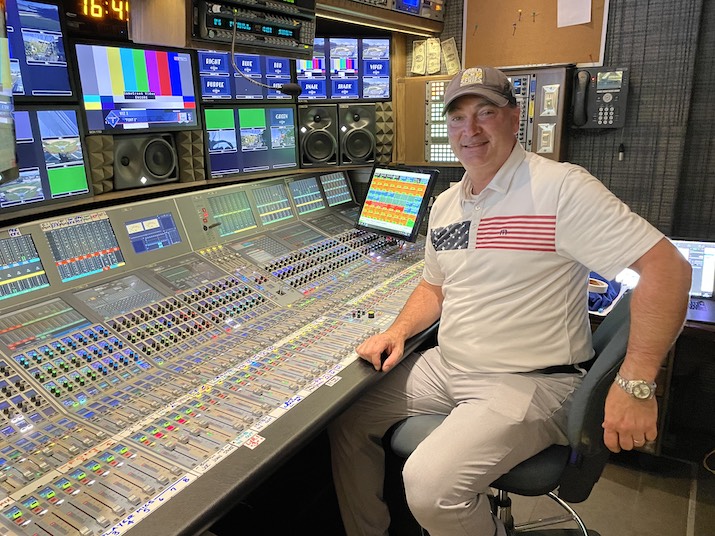 For Fox Sports’ production of the 2022 MLB All-Star Game, A1 Joe Carpenter aims to “make the stadium into one big TV set.”

The MLBPA’s CBA, reminiscent of how comedian George Carlin humorously distinguished the two sports in a now-classic bit, states, “Miking a catcher, first baseman, and one or more outfielders playing in the All-Star Game will be encouraged by the Players Association” (emphasis added).

Carpenter, who will be working with submixer Joel Groeblinghoff, says he and fellow A1 Jason Knapp have tried to establish a conversation between Fox Sports, the league, and the MLB Players Association regarding more-regular application of on-player microphones. One of the sticking points has been how best to place the mic within the league’s new Nike stretch-type jerseys. (Starting Jan 1, 2020, Nike became the official outfitter of the MLB.)

“We’ve been experimenting with the same kind of stretch jerseys that the NBA uses, which have a pocket sewn into them specifically for [a transmitter],” Carpenter says. “In fact, we’ve just learned that the league has seamstresses onsite at the All-Star Game. So there’s that possibility — sewing into their shirt onsite — or if they just want to wear it on their belt and we use it as an effects mic. We want to be able to give them options, as well as reassuring them that we’re using that audio with a lot of control over it; it’d never be used to embarrass anyone. We’re just looking to get as much audio from the field as we can, to capture the sound and the athleticism out there.”

The All-Star Game has far more player substitutions than a typical game does, which means that players who wear a mic and get tapped to head back to the dugout need to have their wireless gear removed and swapped out to another willing player. The process requires a lot of note-taking to keep track of which mic and transmitter is where.

Which players will ultimately be wired for sound won’t be determined until game time. That includes one who will be named before the game and, for the first time ever, will welcome fans at home and in the stands through the Dodger Stadium PA system.

Carpenter also points out that Dodger Stadium is in one of baseball’s most RF-dense environments. It’s possible that the team may be too successful in signing up microphone candidates, putting a strain on the available bandwidth, which is being managed by CP Communications, during the game.

“At any other venue, we’d just go for broke,” he says, “but here we have to balance how many player microphones there will be with other demands on RF, [including those buried in the infield and around home plate and the pitcher’s mound]. We gotta be careful what we wish for.”

Mics on Walls, in and Around the Bases, Near the Bullpen Phone

The player microphones will be a few of the 76 total transducers that Fox Sports plans to deploy for the game. There will be microphones on walls: PCC transducers mounted on the outfield walls around the edge of the outfield. There’ll also be a dense mic plot with at least 14 transducers around the bases and across the infield apron, right up the edge of the grass, along with mics in the bases themselves. Four manned parabolic microphones will be positioned on the sidelines and in foul territory. There’ll also be a few novel mic placements, including one near the bullpen phone, to listen in as managers prep relievers and their coaches about what they’ll need to get out of jams.

“We’ve been trying to add more entertainment-style things into the audio mix for years,” Carpenter quips. “This will make the stadium into one big TV set.”