A member of the Sports Broadcasting Hall of Fame’s Class of 2008, Scully is widely regarded as one of the greatest sportscasters of all time having called Dodgers games in Brooklyn and Los Angeles for 67 years. He was behind the microphone for 28 World Series, 20 no-hitters, and four perfect games. He also called the NFL and golf, including eight Masters. 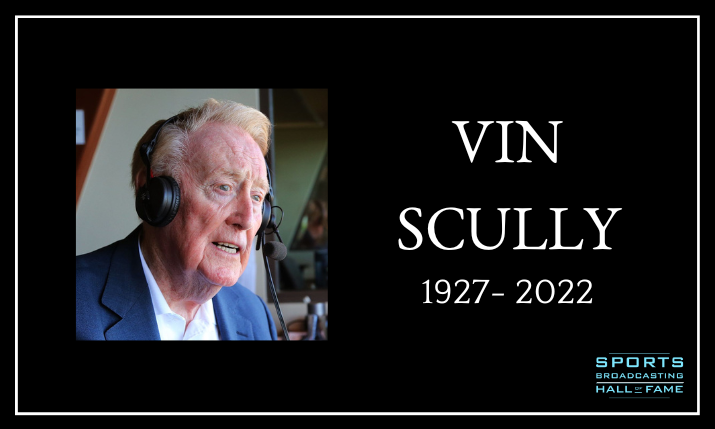 Scully will be fondly remembered for calling thousands of Dodgers games on both television and radio. He called his first game in 1950 as the ripe age of 22. He was on the mic for the Dodgers only championship in Brooklyn in 1955 and moved west to Los Angeles with the team in 1958. He retired following the 2016 season.

He was a wordsmith that deftly told a story better than anyone to ever work in the industry. He was a fan-favorite of baseball viewers the nation over.

“My style is very conversational,” Scully said in a profile from his 2008 Sports Broadcasting Hall of Fame induction. “It’s as if I’m sitting next to you in the ballpark, having a conversation about what’s happening on the field.”

He also delivered with a style free of catchphrases and making himself the center of the action. It was always about the baseball and the athletes on the field.

“Red Barber told me, ‘Don’t listen to other broadcasters, because you bring something unique into the booth that no one else brings: yourself,” Scully said. “There’s no one else in the world quite like you.’”

Vincent Edward Scully was born November 29, 1927, in the Bronx, New York. The son of a silk salesman who died of pneumonia when Scully was 7, Scully moved to Brooklyn with his mother. He would listed to sports on the radio as a child. He went on to play baseball for Fordham University and began his career as a broadcaster there at the on-campus radio station WFUV.

At age 22, he was hired by a CBS radio affiliate in Washington, D.C. He joined Hall of Famer Red Barber and Connie Desmond in the Brooklyn Dodgers’ radio and television booths shortly there after. In 1953, Scully became the youngest person to broadcast a World Series game. He was just 25.

For others in the profession, Scully remains a singular icon. “Vin has a thoroughly distinctive style, sustained excellence, meticulous professionalism, extraordinary longevity, and an association with one of the most colorful and historically significant franchises in American sports,” fellow Sports Broadcasting Hall of Famer Bob Costas said.