Live and broadcast audio, comms ride on a Dante network

Known informally as the “Woodstock of fitness,” the CrossFit Games might owe more to X Games and its multisite operation across a huge campus than that quaintly one-stage ur-music festival. The 2022 NOBULL CrossFit Games run Aug. 3-7 at Madison, WI’s Alliant Energy Center, where they have been since 2017, crowning “the Fittest Man and Fittest Woman on Earth.” The complex venue comprises an exhibition center, vendor pavilions, a sponsors row, a beer garden, and an outdoor competition area, North Park Stadium, built specifically for the Games. As physically spread out as the CrossFit Games have become, though, their digital-audio footprint is apparently smaller this year.

Hearcorp Principal Dave Bjornson, a 10-year veteran of the Games as an A2 and A1, serves as audio supervisor and teamed with Justin Gordon, lead at sound-reinforcement provider Creative Technologies, and CP Communications Senior RF Tech Manager Frank Rafka to create a single Dante-over-MADI IP network for the entire event’s audio needs, including live sound and comms. 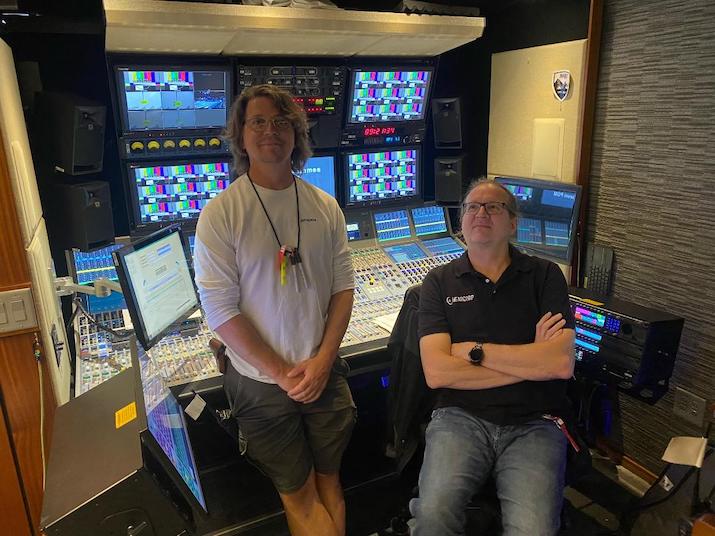 “Historically,” says Bjornson, “broadcast audio, sound reinforcement, and intercoms on this event have been distinct groups living in their own worlds. It wasn’t very efficient, and it didn’t always produce the highest-quality end product. This year, I approached [CrossFit Senior Coordinating Producer] Joe Novello and [CrossFit event producer Hamilton Road Productions] Principal Charlie Dube about the idea of sharing all of the event’s audio over a large Dante IP network.”

On the network are eight Yamaha live-sound consoles, mixing L-Acoustics PA systems at each venue, all connected through Dante. NEP SS8 and SS4 mobile units handle the event-long outbound streaming for CrossFit International program global feeds, as well as the two-hours broadcast via CBS Sports on Finals Sunday. The result, says Bjornson, is that most audio content will be available from and to every location in real time. For instance, racks of Shure Axient wireless microphones that had been intended for specific venues on the campus are now available for any location and for either live-sound or broadcast uses.

That capability is particularly important for the CrossFit Games, where some of the events are kept secret until hours or even minutes before they’re to be played. In some cases, such as last-minute climbing-wall competitions, the only audio assets on hand may be installed crowd microphones and wireless-camera mics. In that case, says Bjornson, wireless lavalier and Hearcorp’s custom contact microphones may be quickly paired with CP’s Axient transmitters in local racks and deployed as effects microphones, attached to a nearby wall or beam.

“A camera microphone can get it started,” he says, “but, once an athlete is 20 ft. in the air, you’ve got nothing. Being able to throw a lav up on the wall on short notice makes all the difference. And that same microphone can go to the live sound and the broadcast.”

A campus-wide Riedel Bolero intercom system is deployed around the various venues and is also extended to outside events via a Unity IP-based intercom with 48 drops across all venues. Unity Connect from the pool at the Nicholas Rec Center encompasses both talent and effects mics and talent IFBs.

“Everyone has a Bolero beltpack, and those can access either the Riedel or the Unity intercoms with the press of a button,” says Bjornson, whose Hearcorp also operates Tech 25, an after-school education non-profit that has introduced and taught the basics of live-event technology to nearly three dozen teens and preteens in Pittsburgh’s Carrick neighborhood. The comms crew includes Alejandro Olivares, who handles Bolero/Riedel programming; Tim Kepner, who does the Adam programming; and Andy Strauber, who is responsible for trunking the intercom systems of the two trucks together, enabling the programming of both trucks from a single location.

Rafka sees the CrossFit Games as a good platform for CP’s extensive foray into cellular-bonding technology, which allows two or more cellular modems to be combined in a way that enables the end user to utilize the combined bandwidth. Cellular bonding transmits live streams via multiplexed cellular signals when Ethernet or Wi-Fi isn’t available. Instead of satellite transmissions, multiple cellular modems are deployed to combine 3G, 4G, LTE, and other cellular signals to boost connectivity.