In one of the largest broadcast-facility builds by a major sports league in recent memory, NASCAR will start construction of a state-of-the-art facility for its NASCAR Productions group this summer. The 58,000-sq.-ft. facility will be built on the land adjacent to the NASCAR R&D Center in Concord, NC, and will replace its current Uptown Charlotte facility as the primary production hub for NASCAR. 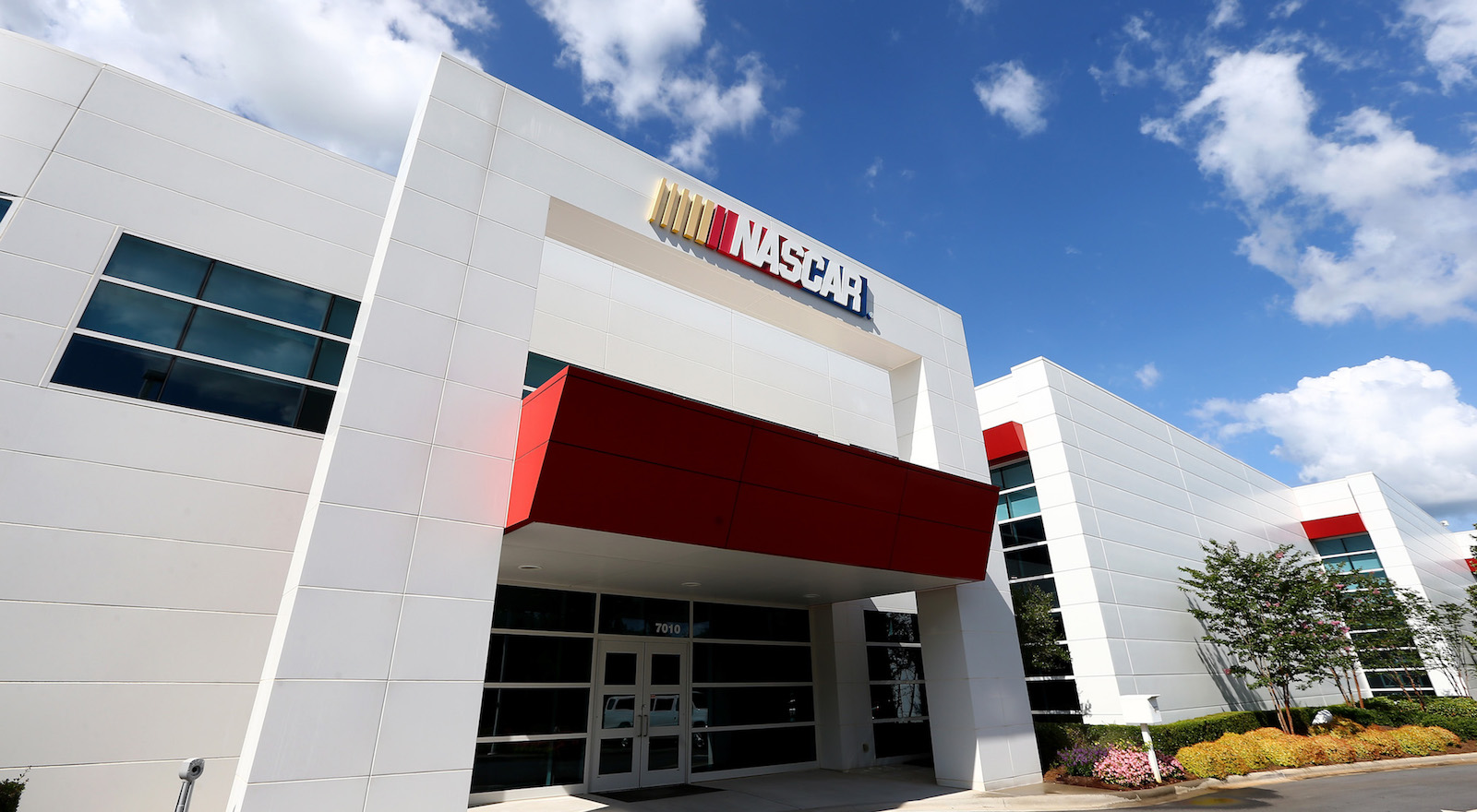 The new NASCAR Productions facility will be located next to the NASCAR Research and Development Center in Concord, NC.

NASCAR has partnered with NEP Group on the new facility, and all production gear will be housed in NEP’s centralized-production data center in Dallas with control surfaces located in Concord. Though still in the early stages of development, the facility is slated to open in the fourth quarter of 2023. Besides boosting production-technology firepower, NASCAR believes the new facility will further entice potential broadcast and streaming partners to bid for its next wave of media rights following the end of current deals in 2024.

“The business has fundamentally changed since we moved into our current building [in Charlotte] in 2009, when there was more of a focus on original, non-live content,” says Brian Herbst, SVP, media and productions, NASCAR. “Over the last few years, there has been a significant shift to live events — and remote productions in particular — with our live productions almost tripling. So the physical space needed to serve our business has evolved, and we need a new facility to prepare for our next stage of strategic growth.”

NASCAR will conduct a groundbreaking ceremony on Aug. 31, and construction is expected to be completed by summer 2023, at which point NEP and NASCAR will begin the systems-integration process. Live testing is scheduled to begin in October 2023, with plans for the facility to come fully online in time for the Rolex 24 in Daytona in January 2024.

NASCAR Productions To Get a Technological Facelift

The new facility will feature seven control rooms and three studios and house approximately 125 NASCAR Productions and MRN (Motor Racing Network) employees, with room to expand operations in the future.

Although NASCAR will continue to have a presence at its current Five Fifty South (formerly known as NASCAR Plaza) location in the Uptown Charlotte area, the Concord facility will be its primary production hub. NASCAR’s lease at Five Fifty South is set to expire at the end of 2023, and much of the equipment at the current facility has reached or is about to reach end of life.

The new building in Concord will be a SMPTE ST 2110-based IP facility with plans to move to 1080p HDR in the coming years.

“We are moving more towards an IP workflow, so we knew we needed to refresh the equipment to [enable] that,” says Steve Stum, VP, operations and technical production, NASCAR Productions. “And with our media-rights negotiations coming up soon, we need to be ready for anything that may be coming down the line in terms of streaming, specialty broadcasts, and things like that. This building will give us a lot of flexibility and expansion space to prepare for what’s next.”

The scope and scale of NASCAR Productions’ business has changed dramatically: its live-event slate has more than doubled, from 200 events in 2018 to roughly 550 in 2022. With most events being remote productions, the new facility will serve as a centralized-production hub for further growth.

“We have seen a lot of value in remote production over the past five or six years and we think the centralized production model is where [the industry] is headed,” says Stum. “We also are looking at how we can best utilize equipment. Instead of building out an entire equipment room ourselves, we are looking to be more efficient: rather than having 50 EVSs in here not doing anything for weeks at a time, we can spin them up at [NEP’s data center] when we need them and not have to pay for them when we aren’t using them.”

He says NASCAR is working with NEP on developing a centralized-production model similar to the NEP Andrews Hub in Australia, NEP Production Centre London, and other similar facilities around the globe. Key production equipment housed at NEP’s data center in Dallas will include Grass Valley switchers, Calrec audio boards, EVS replay systems, and a mix of several graphics platforms. All physical back-end equipment will be located in Dallas, while control surfaces will be located in Concord.

NASCAR is currently working with AT&T Global Video Services (GVS) to establish 24/7 100-Gbps connectivity between Concord and NEP’s Dallas data center, as well as to all NASCAR tracks around the U.S.

“This now gives us the flexibility to decide how much [of an onsite presence] we want to have from week to week,” says Stum. “If we want to have more people onsite for a bigger weekend like the Daytona 500, we’re still going to connect to that equipment at the data center, and people can be onsite. Or if it’s a weekend when we don’t want to send as many resources out to the track and we want to keep people at home, we can make that decision, too.”

NASCAR Productions’ current operations are spread among five floors at the Uptown Charlotte office, but the new Concord broadcast center will allow the entire team to be located on a single floor.

According to Stum, that facility will be laid out similar to a production truck, with each of the three control rooms adjacent to the corresponding audio and EVS-replay rooms. In addition, the off-tube announce booths will be right across the hall from the control rooms.

“We’re looking to create that production truck feel so that everyone is comfortable,” says Stum. “We’ve done a great job [in Charlotte], but, frankly, it’s hard to run a production facility running from floor to floor in a multi-story high rise. I think being on one floor will get people closer and create more interaction and better relationships.

“Plus,” he continues, “there’s simply nowhere to expand [in our current building] for things that we may want to do in the future, like specialty broadcasts, OTT and streaming, and other kinds of new [productions]. This new building is going to give us that capability. I’m really excited with this building to go into the next rights deal and know that the sky’s the limit. This [facility] is going to be the hub that allows us to jump to the next level.”

Productions Will Be Closer to the Rest of the NASCAR Family

The new location is strategically located next to the NASCAR R&D Center and will be more closely situated to the majority of NASCAR team operations. It will also offer more space and allow NASCAR Productions to work more closely and efficiently with the NASCAR competition department.

“Our competition group, productions team, and technology team have been working closer together over the last three or four years, especially when it comes to connectivity to the tracks,” says Herbst. “So it made a lot of sense to build adjacent to that location in Concord where our competition group is located and be more strategically aligned. Also, most of the drivers and teams are located north of Downtown Charlotte, so this will make it much easier for them to come by [our studios].”

Eyes on the Next Rights Deal

With NASCAR’s current media-rights deals ending after the 2024 season, NASCAR President Steve Phelps has said the company is set to begin exclusive negotiations with current broadcasters Fox Sports and NBC Sports Group at the beginning of 2023. Herbst expects the Concord facility to play a major role in how NASCAR’s next wave of rights deals play out.

“We want to be able to service whatever the needs of our media partners are today and in the future,” says Herbst. “This new facility is 58,000 sq. ft., but there is 14,000 sq. ft. for expansion should we take on even more production work in the future. Whether it’s operating the TV compound on behalf of the broadcast partners, taking on more technology-related services on behalf of our media partners, or doing more remote live-production work for them, we want to make sure we’re set up from a technology and a staffing perspective to meet their needs. We feel this new building does exactly that.”