Live From MLB at Field of Dreams: The Game May Look Old, But It Sounds New

MLB Field of Dreams game is back in Dyersville, IA, tonight, with the Chicago Cubs facing the Cincinnati Reds in what has become the most-watched regular-season national-broadcast game in the past quarter century. The 8,000-seat pop-up stadium built last year is ready to go, with the Calrec Hydra, Dante networking, and fiber infrastructure put in place for last year’s event.

Ballplayers wear period uniforms and enter the stadium from a cornfield at the edge of center-right field, evoking the movie that inspired the MLB event. In fact, windows were included in the design of the right-field wall to reveal the 159 acres of cornfields beyond the ballpark and provide views of the movie set.

The Sound of Corn

The audio for the game will be very much 21st century; you just won’t be able to see how it’s done. For A1 Joe Carpenter, the challenge is to collect the baseball’s usual sound elements but keep the process invisible to viewers. That means, for instance, doing without the parabolic collectors that would normally be seen in the outfield. However, there will be two parabs behind home plate and several lavalier mics embedded around the plate and the pitcher’s mound to pick up bat cracks and other effects. And there will be a wired “cornfield mic,” an Audio-Technica AT4050, past the outfield fence. 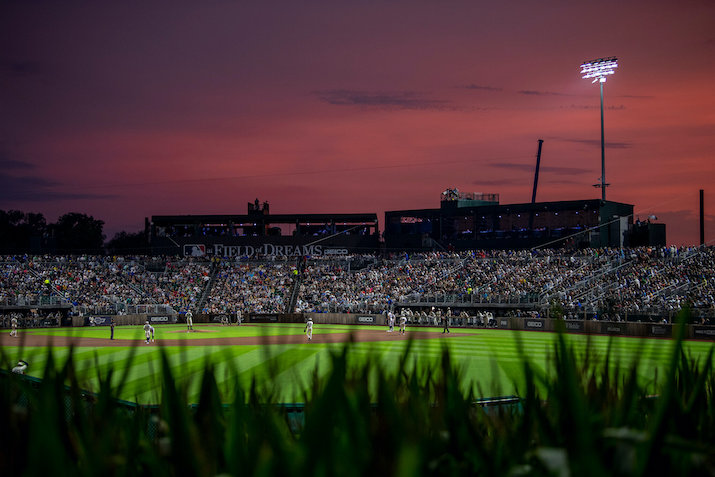 For the MLB at Field of Dreams game, Fox Sports’ audio team aims to capture even the whispers of the corn in the wind.

Carpenter will manage those microphones, as well as the Q5X PlayerMics worn by the Reds’ six-time All-Star first baseman Joey Votto and the Cubs’ 2022 All-Star outfielder Ian Happ. Offering viewers a look inside the game, the players will converse with Fox Sports announcers Joe Davis and John Smoltz during the game.

Meanwhile, submixer Joel Groeblinghoff will be looking for some very specific sounds, including catching the whisper of corn stalks moving in the wind and as the ballplayers dramatically enter the field. The challenge, he says, is finding ways to pick those nuanced sounds up without compromising the aesthetic conceit of the event.

“We’ll be able to put between seven and maybe eight RF lavs on the outfield fence, a couple of parabs in left and right foul territory,” says Groeblinghoff, who will be working on a Calrec Brio console in a trailer separate from Game Creek Encore’s units, one of which will house Carpenter. “Closer in, I’ll also have a couple of dugout microphones and RF lavs in the bases.”

Although the number of effects microphones is smaller than for typical event-type matches, such as All-Star or postseason games, their collective power is perhaps greater because it’s a much quieter environment, with a much smaller crowd. It’s quiet enough, says Carpenter, to pick up some of the vintage sounds of this game, such as the creak of the ladder used by the scorekeeper to update the manual scoreboard and the clank of the rusty metal numbers as they are hung inning after inning.

“This is really more like a minor-league game in terms of sound but with way more microphones,” says Groeblinghoff. “You can hear and pick up a lot more of what’s going on. Last year, I was hearing plenty of complete conversations on first and second base from those microphones because it was so quiet. You’re not fighting the PA system here. The noise floor is way down on this game; it literally changes the gain structure [of the console].”

Says Carpenter, “This game is all about being respectful of its environment, of where it’s being played.”

He adds that the production will integrate clips from the movie and some experimental AR elements, such as having the late Harry Caray lead the crowd in singing “Take Me Out to the Ballgame.” “There’ll be a lot to hear, but they don’t want to see anything in the outfield but the corn.”