If you look at one of the more poignant scenes in Field of Dreams — the moment when Archibald “Moonlight” Graham returns to the field as the much older Dr. Graham — you see a handful of old-school players from the 1920s. The sharpest eyes will note, near the back of the crowd, the look of the 1919 Cincinnati Reds. Recalling this shot in the film and honoring a baseball team founded in the 19th century, the club’s digital team is emphasizing both the throwback uniforms being worn during Thursday night’s game and the history of the 141-year-old franchise.

In what has become similar to the uniform drops for the Army-Navy Game, fans were extremely excited when the Reds announced their look for the 2022 MLB at Field of Dreams game. The 1919 jerseys are a departure from the Reds’ typical home uniform with the generic white template. Introduced to celebrate the team’s first appearance in the World Series, the 1919 version was the first of many iterations of striped uniforms worn at home. Other versions were worn in 1961-66, 1967, 1993-98, 1999, 2000-03, and 2003-06. 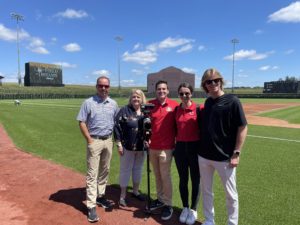 Although the team has opted for the striped uniform over the years, it has been a decade and a half since players donned a full striped outfit. Other elements of the MLB at Field of Dreams uniform have Reds fans fired up. It’ll be the first time the batting helmets carry the vintage logo because helmets weren’t required by the league until 1971. The Aug. 8 announcement, a simple tweet showing the essential details of Thursday’s uniform, has received nearly 900 retweets and more than 7,500 likes:

A full four days before the uniforms were released to the public, the Reds were hyping the game as much as possible. Doing an impressive job of building anticipation for the occasion while also covering the other regular-season games, the organization used the backdrop of a special MLB at Field of Dreams photo shoot. Positioned in front of a backdrop that looks a lot like the atmosphere of Dyersville, IA, or within the actual cornfields surrounding the field, various players from the team are photographed with either bats or corn husks in hand:

As the team’s longtime talisman, first baseman Joey Votto is prominently featured. For example, one of his photos was used to alert fans about how close they were to experience this game in person or on television:

Much like the telecast, the Reds’ social-media profiles have been highlighting the utter beauty of the game’s setting. Without high-rise buildings or light pollution, the sprawling landscape seems to have a personality all its own. Whether it’s glamorous daylight shots, aerial views of the logos cut into the cornfields beyond the right-field wall, the breathtaking vistas at dusk and the sunset, or the vibe when the flood lights are turned on, there’s nothing quite like baseball in Iowa. As nature paints a masterpiece on its canvas, the crew has been sharing some of the stunning shots with their audience without much of a description:

Working 483 miles from home, the onsite team features a core group of five. At the helm is Senior Director, social media and content strategy, Lisa Braun, a 13-year veteran of the organization, and Director, PR and photography, Michael Anderson. Supporting them is a trio providing the boots on the ground at the Field of Dreams complex. Team Photographer Emilee Chinn is capturing all the still photos and static visuals seen on all social-media platforms and will be positioned at field level to shoot action shots during the game; Social Media Manager Nolan Mattson handles the posting and execution of the team’s strategy; and Video Producer Landen Brocato is recording footage to be distributed via the club’s digital channels.

In terms of the bigger picture, this once-in-a-lifetime game means something different to each person working on it. For Brocato, it’ll be the start of a new era: after 2½ years at North Dakota State University and eight months with the Kansas City Royals, he is working his first official game with the Cincinnati Reds. For Votto, both the movie and his participation in this game will transcend any ordinary day on the diamond:

I was raised on this movie. My family had a collection of VHS tapes and one of them was Field of Dreams. I would watch it often. (🚨spoilers ahead)

My father passed away 14+ years ago. So it is impossible for me not to feel an emotional connection to the moment where Ray asks his father for a catch. One more moment together.

Getting the opportunity to play a game at the mythical field that sowed the seeds of hope for a Major League Baseball career is a significant moment for me. Couple that with the father/son connection, and this game is an exceptional moment in my life.