Live From MLB at Field of Dreams: Fox Sports Returns to Iowa for Cinematic Feast for the Eyes

If it ain’t broke don’t fix it.

That’s the mantra that Fox Sports is taking into this second installment of the MLB at Field of Dreams game (Thursday, 7:00 p.m. ET, Fox)  from the site of the iconic 1989 film set in a small-town cornfield in Eastern Iowa. 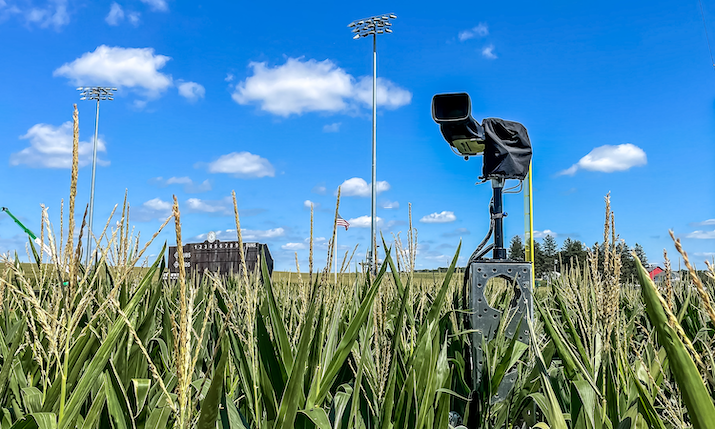 Fox Sports returns to MLB at Field of Dreams on Thursday night with more than 30 cameras prepared to capture and deliver a cinematic viewing experience from the iconic movie site. Among those cameras are this new P50 robo peeking out from the cornfield just off first base.

So much went right for both Fox and Major League Baseball last year in an event that earned Fox the 2022 Sports Emmy Award for Outstanding Live Special. Pleasant weather served as a comfortable backdrop for a wild finish (complete with a walk-off home run). That being said, a lot of the creative choices that both entities made put them in a position to succeed: from the sprawling corn stalk-filled outfield to the cinematic aerial shots and the memorable pregame ceremony.

There’s a new story to tell — one more focused on the nostalgia of old-time baseball — this time around, but, in terms of the production and operations plans, here in Dyersville, there’s a lot that’s familiar.

“I think that we and MLB got a lot of things right last time and, obviously, we got very lucky,” says Michael Davies, SVP, field operations, Fox Sports. “We got lucky with the game’s moments. We got lucky with the weather. It was all fantastic. Because there was so much that we got right, we didn’t need to change a whole lot in terms of the coverage, and, for that reason, we didn’t.”

Were there lessons learned from 2021? Were there opportunistic tweaks made to improve this year’s production? Of course.

This year’s truck compound is bigger and uses the available space more sensibly; Game Creek Video Encore and 79 trucks made the trip after supporting the broadcaster’s work at All-Star Game in Los Angeles.

Some tweaks were made to the camera lineup as well to give more cinema-style images. Also, certain cameras were repositioned because the corn stalks at the venue are about 3 ft. shorter than they were a year ago.

The game production features more than 30 cameras, including four super-slo-mos shooting at 6X. Additions include an RF Polecam in the outfield and the Sony F5500, which, for the first time on a Fox show, will be used as an RF handheld. 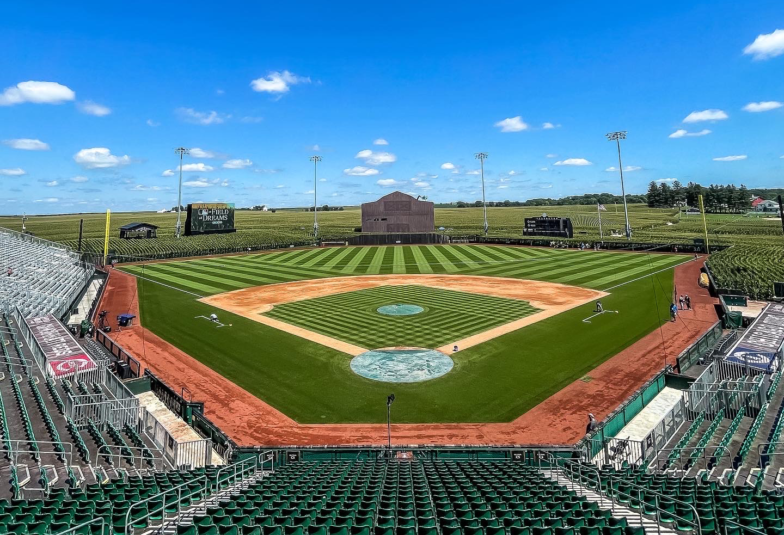 The 2022 MLB at Field of Dreams game pits the Chicago Cubs against the Cincinnati Reds at a custom-built field in Dyersville, IA, on the site of the 1989 movie.

Last year, Fox Sports erected a tower camera, similar to those used on a golf production, in the outfield, but wind issues and a lack of flexibility in what the camera could capture led production and ops to scrap that and go with the Polecam this time around. With the shorter cornstalks, Fox expects to use that unit more liberally for establishing shots coming in or out of breaks.

As for the F5500, a 4K-capable camera system unveiled by Sony last October, the MLB on Fox team has been finding ways to work the system into different locations to give a cinematic shallow–depth-of-field look to traditional broadcast-camera positions. At the MLB All-Star Game at Dodger Stadium, the crew got great shots from it as a hard camera on the first-base line. The MLB at Field of Dreams game marks the first time that Fox will try the system as a roving RF handheld.

MORE: Live From MLB at Field of Dreams: Fox Sports’ Studio Crew Lowers Outfield Set To Show Off the Cornfield

The tech-productions team — headed by Lead Technical Producer Tom Lynch and anchored by Sid Drexler, Brian Obert, and Taihe Miller — is deploying two of its signature Dirtcams, this time adding one in the pitching mound to accompany their consistent look just off home plate. There are also looks from Dreamchip cameras in each bullpen as well as a robo peeking out of the corn just off first base.

“We have a lot of ability to continue to tell this game’s story as a movie,” says Brad Cheney, VP, field operations and engineering, Fox Sports, who is working with Director, Field Operations, Francisco “Paco” Contreras on this year’s engineering plans. “To be able to pull yourself back and forth between the cinematic and venue within the game itself is great.”

One of the stars of last year’s show was the aerial imagery. With a fixed-wing plane (provided by Winged Vision), a small fleet of drones (Beverly Hills Aerials), and a two-point cabled camera system stretching more than 1,400 ft. (FlyCam), Fox Sports essentially had three tiers of aerials, always keeping the venue visuals fresh and captivating throughout the broadcast.

This year, Beverly Hills Aerials has expanded its drone lineup for the show to four: two heavy-lift drones outfitted with Red Komodo 6K cameras; an FPV drone for faster, more nimble shots; and the super-compact Bumble Bee drone that was used for safe flying over the action during the USFL season. 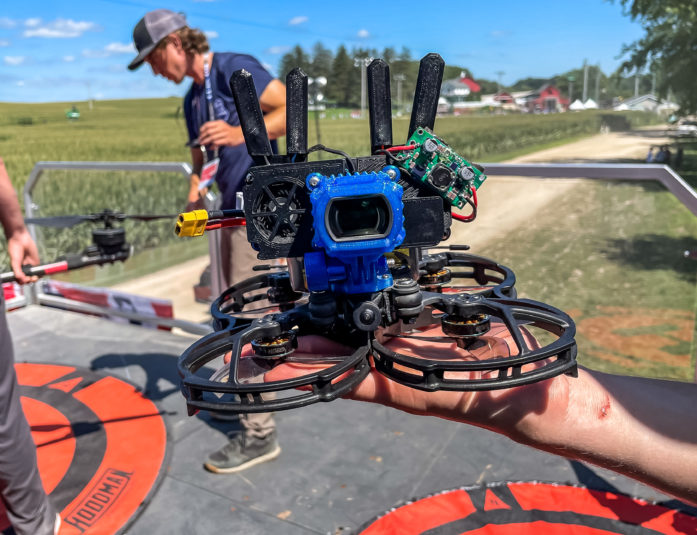 Beverly Hills Aerials is flying four drones at this year’s event, including the compact Bumble Bee drone, which flew over the field of play during Fox’s coverage of the USFL last spring.

“We, honestly, didn’t quite know what we were going to get with the drones,” says Davies. “I think, every year, people become more comfortable and confident in their use. I think you’ll see a little bit more orchestration with the drones [this year] with what’s happening on the field during ceremonies especially. This field offers the perfect venue for drone flight because you can fly over most of the property without having to worry about flying over people while still getting coverage of the game and the event. That’s pretty sweet.

“We were excited that drones would be a big part of this,” he continues. “Not because we just like drones, but because drones are such a great way to show off venues, and this is one of the coolest venues that we’ll do all year.”

It’s an eye-popping collection of images for Game Director Matt Gangl, Producer Pete Macheska, and Technical Director Paul Harveth to cut through. Although a Major League Baseball game is still the focus, the venue will be the main attraction.

“When the sun sets, it’s just a magical time here,” says Gangl. “Being able to capture that, in particular, from so many different angles is great. We’re going to do our best to capture the best images possible and lean into the cinematic side of things. We’ve got such a great group of people working here to make sure this is extra special.”

On the audio front, Fox will be placing microphones on selected players throughout the game. The broadcaster and elite A1 Joe Carpenter received rave reviews at the All-Star Game for their work miking players. The deployment here won’t be as aggressive, but there are still plans to have some fun with the players via RF audio tools on the field and in the dugout.

A Dash of Logistical Luck

It shouldn’t come as a surprise that an event of this size in a rural, open field in the Midwest poses many challenges — even when you’ve done it before. The game-operations team of Judy Acone, Bernadette Wells, Erik Guyton, Jennifer Freund, Nick Utley, and Pam Chvotkin pulled it off yet again, even though a serious bout of rain earlier in the week slowed some setup.

The crew will take the delay in exchange for the perfect weather forecast for Thursday night’s game: a mix of sun and clouds and a high of only 78 in the Dyersville area.

“The weather so far, knock on wood, looks good,” cracks Davies. “It’s just such a relief to come into a show like this, a show that’s completely weather-dependent, and know that you’ve got smooth sailing ahead. We’ve been very lucky.”

The 2022 MLB at Field of Dreams game offers the Chicago Cubs vs. the Cincinnati Reds. Live coverage begins on Fox at 7:00 p.m. ET.