Live From MLB at Field of Dreams: Fox Sports’ Studio Crew Lowers Outfield Set To Show Off the Cornfield

Director, Remote Studio Operations Rob Mikulicka offers a peek behind the improvements to this year's set

In a professional baseball game played on a pristine diamond in the middle of eastern Iowa, the cornfield is the surefire star. Like the game of baseball, nature isn’t always predictable, and this spring’s growing season produced stalks only 8 ft. tall, much shorter than last year’s 11-ft.-tall ones. Fox Sports’ remote studio operations adapted to the circumstances and brought the main set closer — and deeper — into the corn.

“Our first instinct ended up being the best one,” says Rob Mikulicka, director, remote studio operations, Fox Sports. “That was to lower [the set] by 3 ft. Last year, the corn went right to the top of the railing there, but [with the lower set] it’s above the [railing], and the corn has become a bigger part of the story.”

Lost in the Maize: Lowered Platform Brings Cornstalks Into the Picture

Having decided to lower the platform, Mikulicka and company needed to work with Mother Nature to make sure it’s in the most perfect spot. With the help of BaAM Productions, a sizable portion of the cornfield next to the videoboard in left field was plowed and taken away to make room for the set. Beneath the stalks was a hill that needed to be navigated, which means that one end of the platform is higher than the other.

“We had two plans: either lower it or possibly move forward a little bit,” Mikulicka explains. “With the hill getting steeper by nearly 4 ft., I would have had to remove more corn [with the second option], but I didn’t want to do that. We had to redesign some aspects because certain cables ran under the set last time, but that’s obviously out of the question now since the back of the set is resting on the ground.” 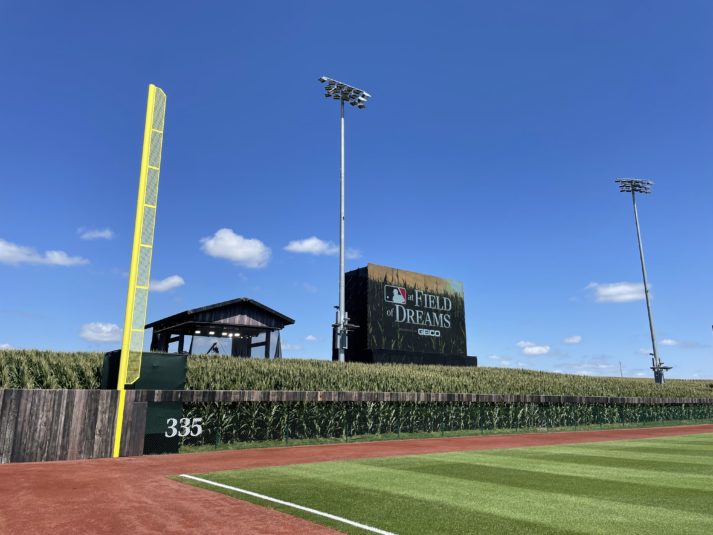 Fox Sports’ main MLB at Field of Dreams studio set is once again located in left field next to the videoboard.

Certain challenges arose as this plot of land was sectioned off. First, the studio team at Fox Sports needed to work closely with BaAM Productions to drop the set at exactly the same spot as last year’s. Relying on the same light pole from last year as a reference point, both parties were able to pinpoint the desired location amongst the sea of corn. Second, the studio-operations staff had to work around a new addition to the MLB at Field of Dreams schedule: the first-ever minor-league game played at the site — the Cedar Rapids Kernels vs. the Quad Cities River Bandits — on Tuesday, Aug. 9. From an operational perspective, pulling off this set was an arduous task, but, creatively, the broadcast will benefit from new sightlines that make the desk seem to be engulfed by the cornstalks with the field slightly behind the desk.

“We put a lot of focus on the fans [during other regular-season games],” notes Mikulicka. “Here, the corn and the field are a huge driver of the story. We want to show it off as much as possible.”

With the location selected and the platform lowered, Filmwerks took the proverbial baton and constructed the infrastructure. The company helped Fox Sports remodel and retrofit an existing desk with the appropriate wood finish. 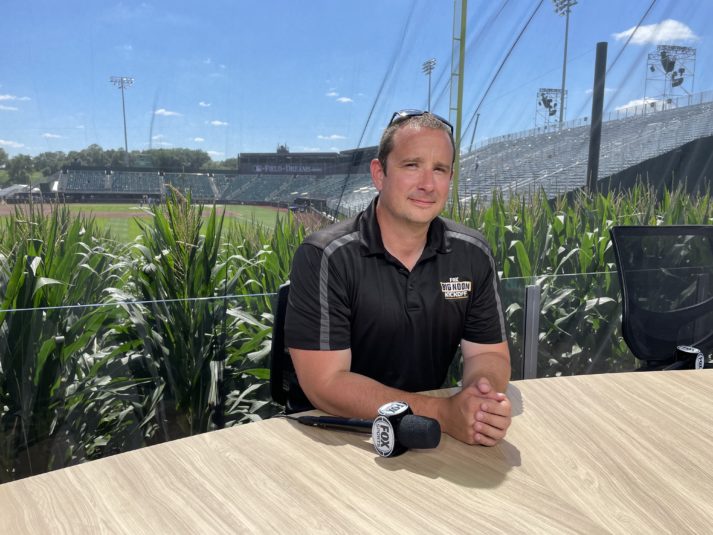 The steel structures above and on the sides of the set was designed with weather in mind. Iowa is known for unpredictable and sporadic weather that can include ferocious thunderstorms and nasty tornadoes. Similar to last year, when a tornado warning was issued a day before the first outing of MLB at Field of Dreams, harsh conditions affected construction.

“We did have some challenges in the beginning,” says Mikulicka. “There was a lightning alert going on at the time, and the crane is probably the worst thing to have up because it’s taller than the light pole, which is our lightning-protection system. We helped Filmwerks get the roof raised, and, once that was up, we could safely work on getting the desk and tech ready to go.”

To prepare for inclement weather on Thursday, Filmwerks has ensured that the structure can withstand winds upwards of 80 mph, even though Fox Sports will take precautions if gusts reach 35-40 mph. For accurate readings, the broadcaster’s trusted meteorologist is working onsite at the ballpark. Aside from weather, the setup is designed to accommodate any flyball-turned-homerun that reaches the desk. If a player gets hold of a ball during batting practice, the netting/lighting scrim behind the talent’s chairs will be able to stop the impact of a hard-hit ball. 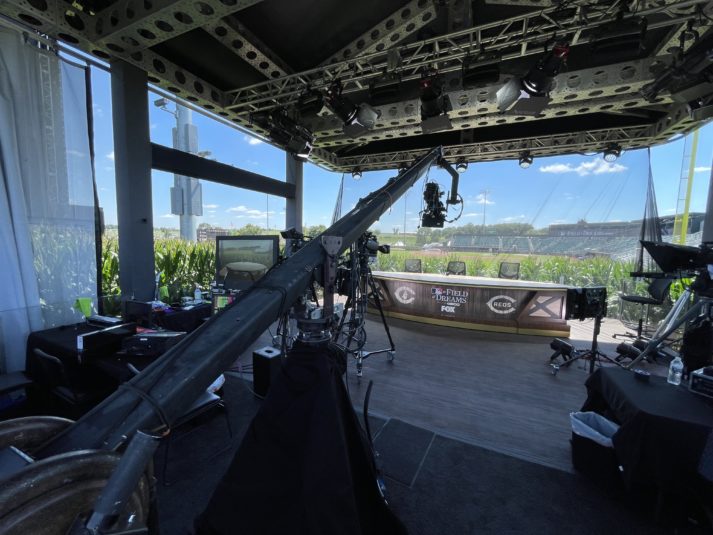 In the compound, director David Faller and producer Bardia Shah-Rais will handle the pregame and postgame shows from Game Creek Video Encore mobile unit. The pair will have multiple camera feeds at their disposal, including three hard cameras and a jib on the set, along with cameras that will be used during the game: a cable cam running from the field to the original movie set, three separate drones (two heavy-lift and one FPV racing), RF handhelds, and more. Fox Sports’ Vault facility in Los Angeles will be online for studio programming, with one EVS machine, one teleprompter operator, and graphics.

Although Mikulicka is executing a large chunk of the operation, the overall vision begins with VP, Remote Studio Operations, Rod Conti. Conti’s preparations began in 2020, and, although many elements of the original studio set have been changed, the final product emphasizes the one-of-a-kind atmosphere at Dyersville, IA. In addition, Faller and Shah-Rais and the live-broadcast duo of director Matt Gangl and producer Pete Macheska will take viewers on a nostalgic journey to the heart of what makes baseball so special.

“It really takes a village,” adds Mikulicka. “There’s no one person that can do all of this alone.”