Live From MLB at Field of Dreams: MLB Network Is On Hand for Minor-League Game, Studio Shows

After the success of the inaugural MLB at Field of Dreams contest between the New York Yankees and Chicago White Sox in 2021, MLB Network felt the need to expand its onsite coverage from Dyersville, IA. Given the increased interest, the broadcaster has added offerings, including the linear production of MiLB at Field of Dreams game on Tuesday night and live editions of marquee studio shows within their respective sets.

“We did only Intentional Talk last year,” says Tom Guidice, VP, remote operations, MLB Network. “We’ve now brought MLB Tonight and coverage for our digital shows on Twitter here. We ultimately wanted to create a cooler look that would blend [these studio sets] into the theme of this event.”

For the 2021 edition of this unique spectacle, MLB Network made its way to the Hawkeye State with a minimalistic approach. Knowing how far to push operational and production envelopes, the team is staking a claim on both the MLB-created field and the original set of the 1989 film. 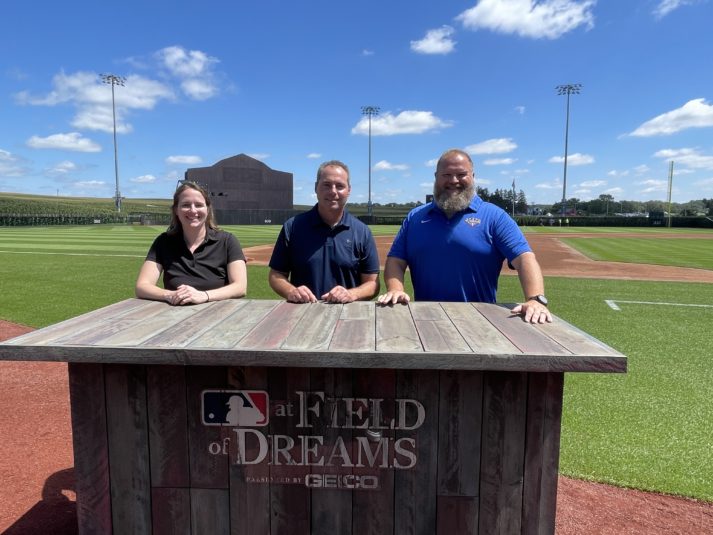 From left: Stephanie Perone, Tom Guidice, and Jason Hedgcock at the MLB Tonight set on the field

The work began in April at the start of the 2022 MLB regular season. Guidice’s first site survey revealed a bit of a twist: the massive cornstalks adorning the land this summer are a lot shorter than they were last year. This made it less easy to envision how the finished product would look in August.

Deciding to bring MLB Tonight to Iowa, the crew began working closely with the teams at Filmwerks and Creative Dimensions to create a larger yet more mobile desk. Since it’s a new feature, achieving the desired look took experimentation. The result is a sleek wood structure finished with a faded brown color to match the faux-wood structures around the ballpark.

MLB Tonight, featuring host Greg Amsinger and analyst Harold Reynolds, aired at 5 p.m. ET on Wednesday, Aug. 10 and will be on the air at 5 p.m. prior to the matchup between the Cincinnati Reds and Chicago Cubs. The show deploys two hard cameras and a roving RF handheld, which will capture live shots of batting practice.

Setting up shop in the same location as last year, the set of intentional Talk has some extra dressings that help it conform with the event’s overall look. Situated next to the house of the fictitious Kinsella family and overlooking the cornfields, the set has been outfitted by the operations team and BaAM Productions with such elements as a white picket fence, an overlay that makes the desk look like aged wood, artificial turf that looks like natural grass, and traditional red, white, and blue bunting reminiscent of the golden age of Major League Baseball.

In addition to the two shows, the broadcaster is using its time in Iowa to augment other coverage. MLB Pipeline reporter Sam Dykstra conducted a live hit from the field on Tuesday, Aug. 9 for shows produced in Secaucus, NJ, including MLB Central, and MLB reporter Jon Morosi appeared live on other programs on Aug. 9-11. The league’s social-media and digital efforts are being produced onsite with miked players. 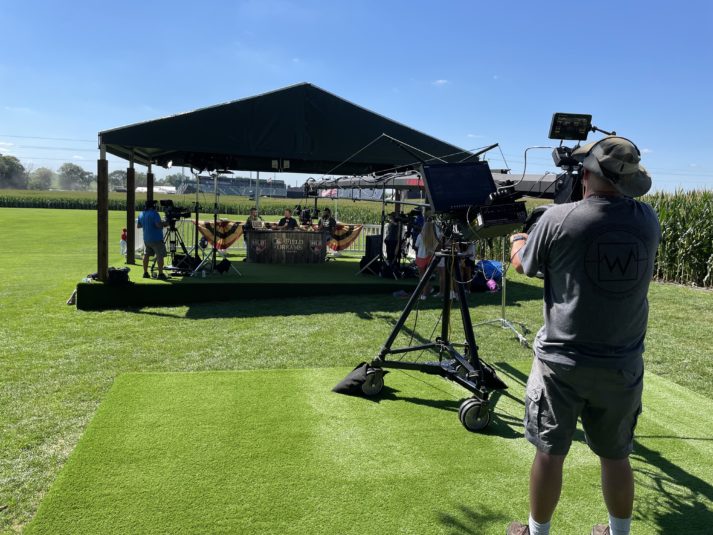 The set of Intentional Talk received significant upgrades after the 2021 MLB at Field of Dreams game.

The broadcast deployed seven hard cameras, but — with the help of Fox Sports’ operations team led by VP, Field Operations and Engineering Brad Cheney and Lead Technical Producer Tom Lynch — the game was enhanced by a handful of cameras installed by Fox Sports for Thursday’s main event. In the compound, Game Creek Video 79 A and B units were at the center of the show.

To accommodate the first minor-league game at the complex, MLB Network needed to shift its content schedule. Last year’s game provided a blueprint for the operations team, but putting the new plan into motion had its fair share of challenges.

“I’d say the hardest part is coming in earlier [in the week], setting up for a game [on Tuesday], and then trying to reset for another game and all of our studio programming,” says Stephanie Perone, director, remote technology operations, MLB Network. “Fox has been really great partners, so it helped collaborating with them like we always do on some of these big events.”

Coordinating travel for staff from MLB Network’s headquarters in the metropolitan New York area to the quaint and serene locale of Dyersville isn’t easy. There are many ways to get to this town of fewer than 5,000 residents, and Perone was in charge of getting everyone onsite in a timely manner. 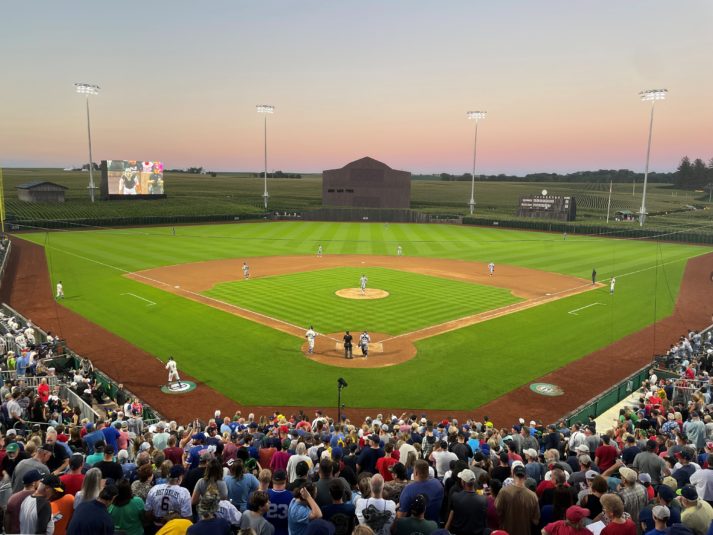 The 2022 MiLB at Field of Dreams featured the Cedar Rapids Kernels and Quad Cities River Bandits on Aug. 9.

“Logistically, we learned a lot from last year,” she says. “We tried flying crew through Chicago to closer airports like Cedar Rapids, but almost everybody missed their connections due to weather and ended up driving [to Dyersville].”

Effects of the COVID-19 pandemic continue to hamper domestic travel. Whether it’s mechanical issues, missing airline staff, overbooking, or other reasons, trying to get from one place to another has been a bit of a nightmare. Dealing with the uncontrollable in travel has required flexibility and the ability to adapt to unforeseen cancellations and delays.

“This year,” Perone explains, “we coordinated everyone to come in at the same time in order to carpool. Everyone working this event understands the difficulty of getting here, so they are super-cooperative, have lots of patience, and are happy to do things that they don’t usually do.”

Recapping the Summer: MLB Network Powers Through Notable Events Across the Country

This core group of professionals have navigated and slalomed their way through an intense stretch of productions. For example, the network has been on hand for jewel events throughout the nation over the past three months: the MLB Draft Combine in San Diego June 14-20; MLB All-Star in Los Angeles July 15-20; MLB Hall of Fame Induction Ceremony in Cooperstown, NY, on July 24; the Hank Aaron Invitational on July 31; and wall-to-wall studio coverage of the Trade Deadline, which culminated on Aug. 2.

The schedule of marquee productions may be overwhelming, but the team will only get busier in the upcoming postseason with qualifiers for the 2023 World Baseball Classic in Panama and Germany in September and October and productions of the international tournament in March. Despite the obstacles that come with these endeavors, the team will deliver with excellence while also handling MLB Network Showcase games, MLB Games of the Week Live on YouTube, and Friday Night Baseball on AppleTV+.

“We’ve been pretty slammed going from event to event,” says Guidice,
“but our remote[-operations] staff is the best in the business, and we’re also backed by reliable freelancers. There’s no better place to cap off this crazy summer than here in Iowa.”

MLB Network’s coverage from MLB at Field of Dreams leads up to Thursday night’s contest with Intentional Talk at 4:00 p.m. ET and MLB Tonight at 5:00 p.m.