Lucas Oil Stadium, the 14-year-old home of the Indianapolis Colts and host to many professional and collegiate sports championships, will boast a different look for the upcoming 2022-23 NFL season. After an offseason of renovations, the venue has an entirely new LED interface with new main videoboards, ribbon boards, ticker boards within the club level, and solutions from Ross Video behind the controls.

“Anything that was originally hard signage is being replaced with LED,” says Mike Stevens, manager, broadcast operations/executive producer, gameday presentation, Indianapolis Colts. “Between game presentation and our partnership department, we’ve been able to come to a happy medium to make sure that all of our sponsors are taken care of.”

With national acclaim and a 70,000-seat capacity, Lucas Oil Stadium has a busy schedule of events outside of the Colts slate. One recent event was the 2022 College Football Playoff National Championship between the University of Georgia and the University of Alabama. To accommodate that marquee matchup, the Colts began discussions about the renovation project in November 2021. The planning continued throughout December 2021 and January 2022, and, a few months after the last game of the 2021-22 college football season, the building was completely shut down in mid March. The closure coincided with other renovations being done in the facility. 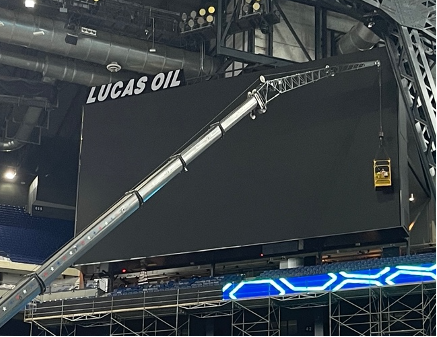 Lucas Oil Stadium was closed in mid March to accommodate the new installation.

“In addition to the LED project,” says Stevens, “all the suites and both NFL locker rooms were renovated. I think the city took an opportunity to knock out two birds with one stone.”

While the doors were shut, Stevens and company went to work with familiar vendors. For example, WJHW, which had created the original infrastructure, was once again part of the process.

On the videoboard side, the Colts took a chance on SNA Displays. Launched in 2009, the New York-based firm specializes in outdoor commercial displays in heavily congested areas like Times Square and small-scale sports-centric installations like the University of Central Florida’s John Euliano Park and the Columbus (OH) Blue Jackets locker room at Nationwide Arena. This was its first major build for an NFL franchise. 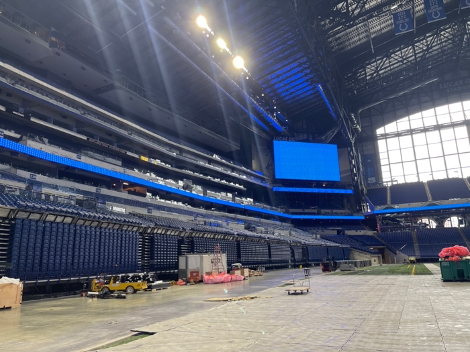 The Indianapolis Colts worked closely with Ross Video’s Rocket Surgery to create graphics for the videoboard.

The project’s finishing touches were applied at the end of last month. Prior to 2022 Big Ten Football Media Days at Lucas Oil Stadium on July 26 and 27, the final LEDs were installed, and the additional outdoor marquees were fixed to the exterior of the building. Although the building was closed, both production and operations crews needed to be brought up to speed. At the top of the checklist was understanding the new workflows and LED structures.

“I think the biggest challenge for us was understanding what [these videoboards] were capable of before we even saw anything [on them],” says Stevens. “We had to do a lot of prep work to be able to get our designers on board with the new specs and sizes. Another big lift was to get our mindset out of what we used to do in the past and understand the capabilities of this new system.”

Over the next couple of months, Colts fans will experience enhancements to the game-day show. In the lower bowl will be 50 21.3 million-pixel LED displays, totaling more than 19,500 sq. ft. of real estate. The most notable aspect of these permanent fixtures is that eliminating hard signage has allowed both main displays to be expanded: located in the stadium’s northwest and southeast corners, respectively, each 10-mm-pixel-pitch display will measure 53 ft. high x 97 ft. wide. Aside from the main displays, the venue will be outfitted with more than 2,000 ft. of LED ribbon displays. All the boards will include timing and scoring supplied by OES. 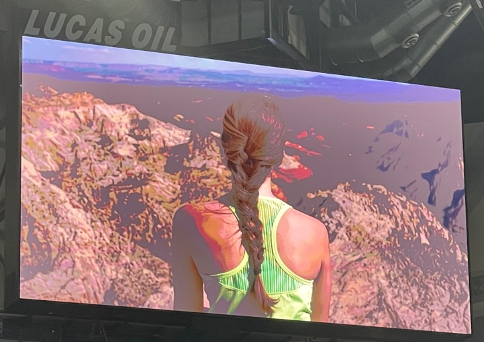 Video for the new displays will continue to be produced in 1080p. The organization switched from 720p to the current format after a new control room came online three seasons ago. The operations team aspires to switch the videoboards to distribute HDR-capable visuals in the future but will stick with 1080p for the time being.

“When we first signed on for this project,” says Stevens, “we knew that Ross was going to be the driving force behind these LEDs. You can take a look at what Ross offers, and we’ve probably got a little bit of everything.”

Heading into the season, the operations team is confident in their work and has provided the production team with the perfect canvas to thrill fans in the stands. After the conclusion of the upcoming Colts season, Stevens will continue to work with his operations team, including Senior Broadcast Engineer Chris Buckley and Broadcast Engineer Nate Gardner, and the production team to deliver concerts and other sports events. 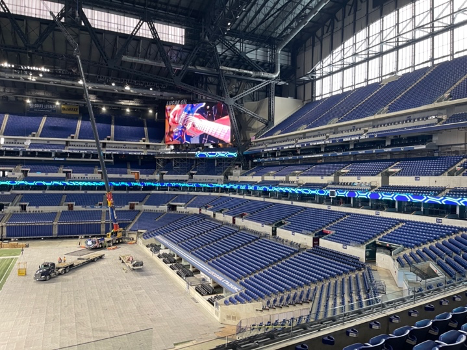 The Indianapolis Colts will kick off the 2022 home schedule vs. the Kansas City Chiefs on Sunday, Sept. 25.

When franchises make the financial commitment to and the emotional investment in a massive renovation like the one at Lucas Oil Stadium, the decision comes with a lot of late nights but the gratifying feeling of accomplishment when the job is complete. Personally, Stevens feels immense pride for being included on the project.

“There’s a sense of relief, too,” he says, “because you do all this work on the backend and hope that it’ll all work. It was a such a good feeling to finally see some of our elements up on the videoboards the other day.”

The Indianapolis Colts will host the Tampa Buccaneers in their third preseason game on Saturday, Aug. 20 at 1 p.m. ET. The club’s 2022-23 home schedule begin vs. the Kansas City Chiefs on Sunday, Sept. 25 at 1 p.m. on CBS.