Whether Las Vegas Ace or Connecticut Sun, it will be the team’s first title

The Las Vegas Aces are one win away from clinching the franchise’s first WNBA title. Facing off against the Connecticut Sun, also vying for their first championship, Sin City could clinch a three-game sweep in Connecticut tonight at 9 p.m. ET on ESPN. From start to finish, the network has been with the league to tell the tale of this championship series.

“This is a pretty significant production,” says Michael Sullivan, lead remote operations specialist, ESPN. “We’re at an NBA Finals–level in terms of cameras and resources. There are important stories to tell, and our company has bought in on giving us the tools to do it properly.”

Seeing in AR: New Technologies Include Virtual Graphics on a Handheld Camera

Looking to evolve coverage of the WNBA Finals year after year, the ESPN operations team is infusing new technologies into the production. One of the main highlights so far is virtual graphics shown through the lens of an RF MōVI camera. Typically used on a stationary camera, the technique has been deployed for other major events throughout the year, including Super Bowl LVI, the Men’s Final Four, and the NBA Finals. In the WNBA wrinkle, fans get a courtside view alongside the virtual graphics. To improve the viewing experience, the technology has changed throughout the course of this series.

“We learned a lot from Game 1, utilized those lessons in Game 2, and decided to have it used on an RF camera [in Game 3],” says Sullivan. “The feedback so far has been pretty positive.” 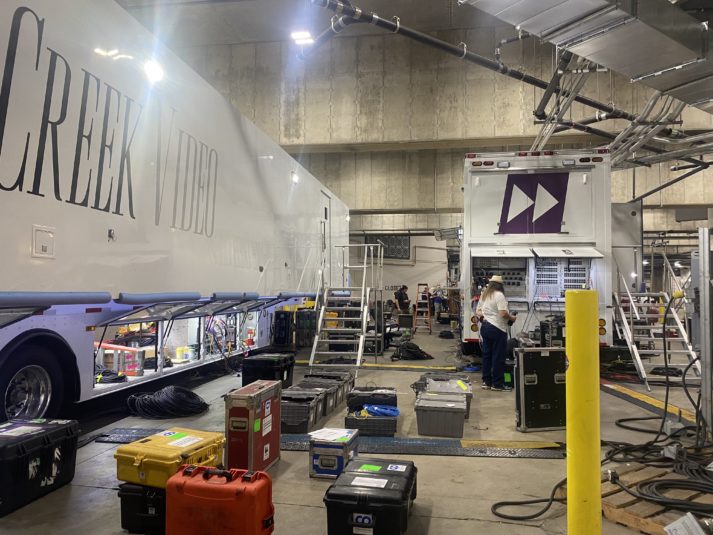 Game Creek Video Riverhawk has led the onsite production of the first two games of the 2022 WNBA Finals.

The new virtual-graphics handheld is supplemented by other cameras. As was done for the NBA Finals, the RF MōVI operator is also tasked with providing cinematic shots from down on the court. Deploying either a Sony Alpha 1 or a DreamChip ATOM one, the league has allowed this camera to get on the court and walk up and down the sideline behind each bench for various shots:  players walking off the floor during stoppages in play, timeouts, free throws.

“We worked with Faction Media and CP Communications to come up with a unique camera and lens combination and worked with the venue to acquire the space,” says Sullivan. “It gives us a lot of flexibility, and, with our partnership with the WNBA, they’ve been forward-thinking in allowing us to try out new things.”

Enhancements to the WNBA Finals complement include a robotic camera installed at each end of the scorers table. Initially tested during the 2022 WNBA All-Star Game in Chicago, these robos have become the main source of isolated shots of Las Vegas Aces head coach Becky Hammon and Connecticut Sun head coach Curt Miller.

Each game is captured with more than 20 cameras, including six Fletcher robos below and above the rim, a reverse camera for player interviews and isos, super-slow-motion feeds via two Sony HDC-4300’s, and in-game audio. 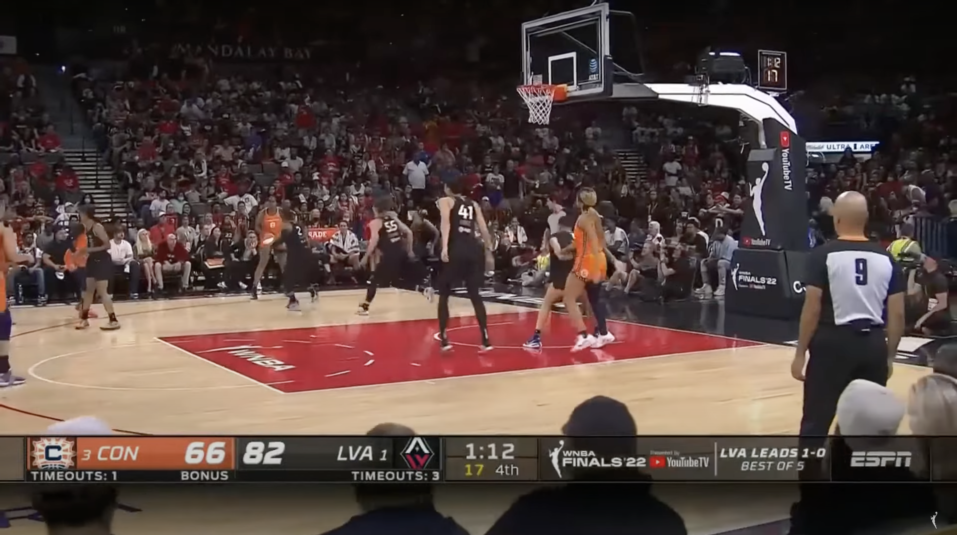 Game Creek Video provides a mobile unit at the respective compounds. At Michelob ULTRA Arena in Las Vegas, the crew operates from Riverhawk, which arrived shortly after the Western Conference Semifinals in Seattle on Sept. 6 before WNBA Finals Game 1 on Sept. 11. Parked outside Mohegan Sun Arena is Justice, which has been in Connecticut since the Sun’s series-tying win on Sept 6 in Game 4 of the Eastern Conference Semifinals. Each venue also has an Edit truck for additional support.

If the Sun are victorious this evening, the two crews will have different issues to deal with. With a potential Game 4 on Sunday, Sept. 18, Smith and company will have to disassemble their equipment to accommodate very different events at Mohegan Sun Arena — Daniel Tosh’s Leaves and Lobster Tour on Sept. 16 and Il Volo Live in Concert on Sept. 17 — and reconstruct it on game day.

If the proceedings reach a winner-take-all Game 5 in Las Vegas on Tuesday, Sept. 20, Garrett and her crew will have to reassemble their equipment at a brand-new venue, MGM Grand Garden Arena. Assisting for efforts in both Las Vegas and Connecticut are Remote Operations Coordinators David Quintanilla and Jalen Taylor, handling gear shipments, equipment inventories, multisite credentialing, and hotel requests.

“We’ve been planning for months about how we’re going to get people back and forth and how we’re going to support each site,” says Michaud. “We made sure to have two sets of equipment since we didn’t know [before the end of the semifinals] if we were going to be in Seattle, Connecticut, Chicago, or Las Vegas.”

On the remote side, ESPN is tapping into its REMCO (remote controlled) model for a handful of services. Located at its headquarters in Bristol, CT — 63 miles from tonight’s contest — graphics operators are inserting the scorebug and implementing Vizrt’s Viz Libero telestration from an offsite control room. Four EVS replay servers are working out of their home base. One of the broadcaster’s biggest remote lifts is a REMI production of WNBA Countdown, featuring host LaChina Robinson and former WNBA coach Carolyn Peck. Remote Operations Producer Diane Dovjak is onsite to oversee the logistics and management of the studio show.

Die-hard fans of each team and the league will be hooked on every play, but, for more-casual fans, ESPN’s production staff is ramping up interest by highlighting multiple storylines. On the surface, the series has a lot at stake from an organizational perspective, with a first championship on the line for both teams. Either coach’s win will resonate with the public. The Aces’ trailblazing Hammon will add to her already illustrious pro-basketball résumé in her first season as a head coach. The Suns’ Miller is the only openly gay male head coach in basketball, which means his triumph would also have societal significance. For the Aces, Defensive Player of the Year and MVP A’ja Wilson is playing alongside electrifying point guard and former Sun player Chelsea Gray; on the Sun’s sideline, two-time WNBA champion DeWanna Bonner is the only player with a championship pedigree. 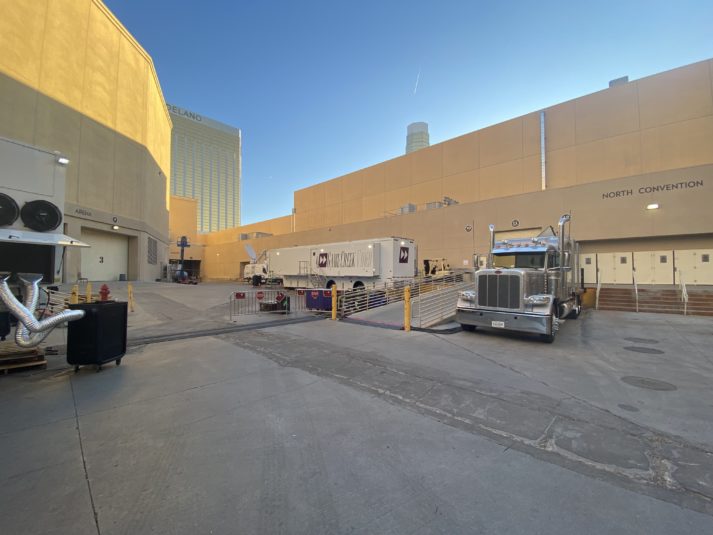 The compound at Michelob ULTRA Arena in Las Vegas

“Both teams inherently have a bunch of really interesting stories that we’ve tried to incorporate into each [broadcast],” says Sara Gaiero, coordinating producer, ESPN. “Educating the viewers on the history and the background of these players, I think, is something that we’ve prioritized.”

Aces fans may celebrate a three-game sweep, but the downside for the broadcaster is that not every story will be explored in detail. When it comes to this scenario, Gaiero puts the biggest plot at the top of the list.

“I think you have to be attentive to what’s most pressing to tell,” she says. “We have to prioritize and be thoughtful about how we work them into the show. We’ll have stories prepared, but, as Game 3 unfolds, we have to react to what’s happening in front of us.”

With games occurring every other day and long flights sending teams across three time zones, the production has relied on the staffers working from Bristol. Maintaining a constant flow of ideas is paramount to successfully executing a philosophy, and in this case, the broadcaster is using every minute possible to get packages ready for air.

“Everyone on the flight [Tuesday] night re-watched the game, came up with their ideas, and sent them over to production on Wednesday morning to get everything to edit,” says Gaiero. “With the game starting late at night, that gives us a little bit of time to turn elements around.”

Combining the stories with high-quality technology takes a lot of collaboration. Gaiero, Sullivan, and Michaud — and their respective crews — work closely together to provide the best presentation possible.

“We’ve have had really good communication throughout the whole season,” notes Michaud. “Sara’s passion for putting these stories on a pedestal can be felt across all of our teams, so we look at what we can do differently and better every week.”

From a production standpoint, Gaiero has seen immense growth in the league. Ever since the 2020 “Wubble” season in Bradenton, FL, WNBA viewership has risen, thanks to its 25th-anniversary season, an influx of new talent on the court, and an overall increase in interest from sports fans. 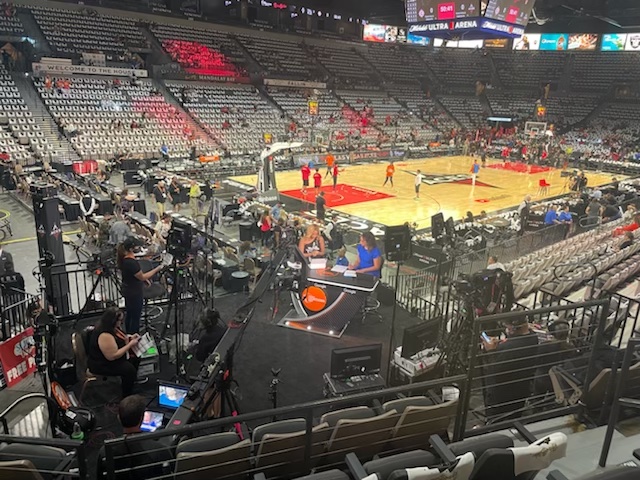 An onsite edition of WNBA Countdown is produced remotely by a crew at ESPN’s Bristol facility.

“If I had to say one word,” she says, “I’d say that I’m encouraged. We’ve seen a tremendous amount of growth in the ratings, and it fills me with so much pride knowing that we’re in a great spot moving forward. I’m extremely happy to be a part of a team that’s leading the coverage of this sport.”

Operationally, Michaud’s first full season on the WNBA has come with opportunities for personal growth. Whether it’s receiving advice from her colleagues or learning on the fly, it’s a pivotal start to the rest of the finals and the next season.

“We have a lot of returning crew members who have given me feedback throughout the season as a first-time manager,” says Michaud. “I’ve been really proud to be a part of this project and work with a team that wants to push out the best product.”