In November, the broadcaster heads to Munich for first-ever NFL game in Germany

When London calls, the NFL Network answers. Next week, the broadcaster will be stationed at Tottenham Hotspur Stadium in North London for a pair of games: Minnesota Vikings vs. New Orleans Saints on Sunday, Oct. 2 and New York Giants vs. Green Bay Packers on Sunday, Oct. 9. Prior experience at the venue will be a huge advantage.

“Having a full-time NFL presence in London over the years has certainly worked in everyone’s favor,” says Dave Shaw, VP, head of media operations, NFL Media. “We’ve made sure that our coverage on NFL Network will be comparable to the highest level we’ve experienced for A-game productions.”

Throughout the season, NFL Media works with all 30 franchises. For example, the league works closely with each organization for the production of the NFL Draft. For the two Sunday games in London, Shaw and his team have been in close contact with the personnel at Tottenham Hotspur: a top-four club in the highest tier of English soccer, the Premier League. From the NFL’s standpoint, converting a soccer pitch into a world-class football field can be difficult. Luckily, the league is playing in one of the newest soccer-specific stadiums in the country. Opened in 2019, the $1.07 billion Tottenham Hotspur Stadium was the first stadium in the world with a retractable pitch that unveils an NFL-certified football field beneath it. Allegiant Stadium, the home of the Las Vegas Raiders, is one of the league’s first teams with a retractable field. 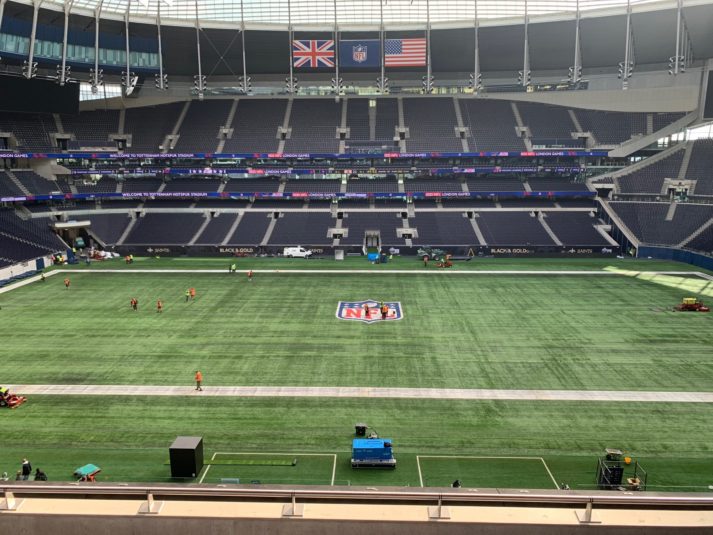 “The staff at Tottenham Hotspur Stadium designed the stadium for NFL games, including camera locations and booths,” Shaw points out. “This gives us the amenities that we’ve become comfortable with in the U.S.”

Developed and installed by SCX Special Projects, an engineering firm located 162 miles away in Sheffield, the pitch is divided into three separate sections and rolls into a storage area beneath the South Stand in about 25 minutes. Two regular-season NFL games were played in the building in October 2021, and the architectural marvel allowed NFL Network to produce them in a venue that was familiar.

“We’ve had a great experience leading up to the games on Sunday,” says Shaw. “This venue helps us take our production to another level.” 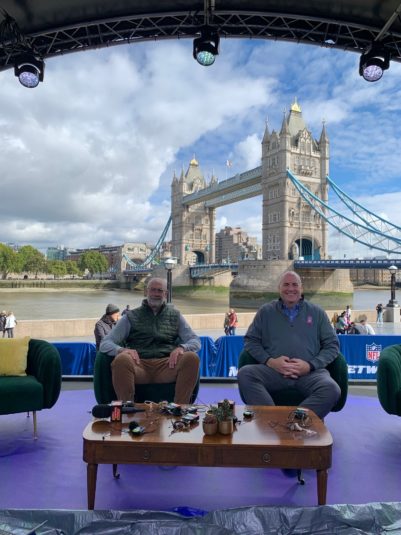 Heading into the weekend, NFL Network is providing football fans with a diverse slate of live programming. To capture the sights and sounds of the English capital, NFL Network Senior Director, Media Operations, Adam Acone and his crew have assembled multiple studio sets in two primary locations: Westminster Live Studios with views of Parliament in the background and Potters Fields Park in front of the iconic Tower Bridge. The former locale hosted programming on Monday, Sept. 26 and Tuesday, Sept. 27; the latter, shows from Wednesday, Sept. 28 to Friday, Sept. 30. During the past week, Good Morning Football has featured Jamie Erdahl, Jason McCourty, Peter Schrager, and Kyle Brandt. The show has been remotely produced at the NFL Films facility in Mount Laurel, NJ, through the help of Director, Transmission Operations, John MacNamara; Director, Broadcast Engineering, Kevin Clifford; Director, Studio Operations, Eddie Sheridan; and Senior Technical Manager Rhett VanBuskirk.

In addition, a live version of the Around the NFL podcast with Gregg Rosenthal, Dan Hanzus, and Marc Sessler was recorded at O2 Forum Kentish Town on Thursday, Sept. 29.

For pre/postgame, NFL Media is tapping the NFL’s L.A. facility next to SoFi Stadium. NFL GameDay Kickoff, which will begin at 7 a.m. ET on Sunday, Oct. 2, will be a 2½-hour edition featuring Colleen Wolfe, Kurt Warner, Willie McGinest, Cynthia Frelund, Ian Rapoport, Mike Garafolo, and Tom Pelissero from the Los Angeles and Stacey Dales and Rachel Bonnetta reporting live from London. The L.A.-based talent will also be ready to go in case the game broadcast is delayed by weather or other circumstances. NFL fans are creatures of habit, but, for this upcoming Sunday, live game coverage will come a lot earlier than usual, with 9:30 a.m. ET kickoff. 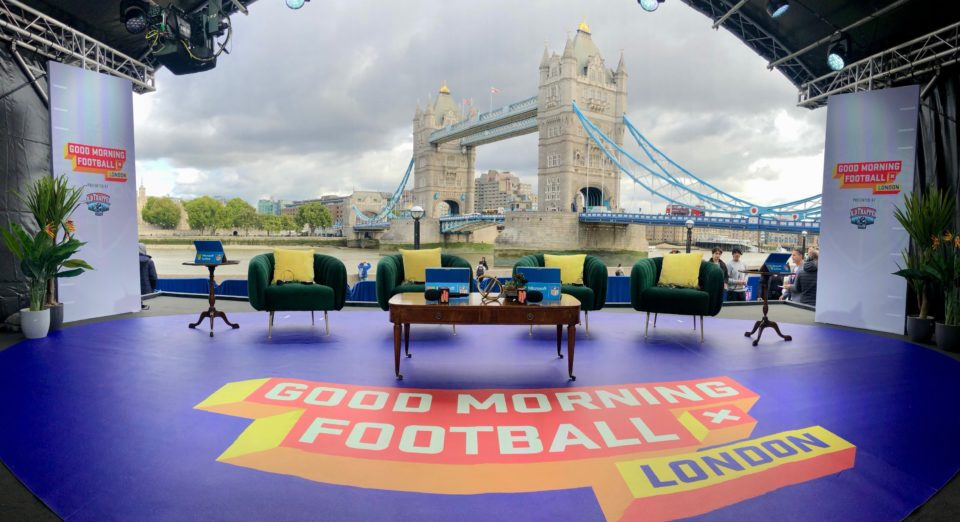 “Due to timing, the game will replace our normal Sunday programming of GameDay Morning,” says Shaw. “Many fans have become accustomed to getting their preview of the Sunday games, but they’ll instead be treated to an early game.”

On the call inside Tottenham Hotspur Stadium, play-by-play commentator Kevin Kugler, analyst Mark Sanchez, and sideline reporters Laura Okmin and Erdahl will document the action between the Vikings and Saints. After the final whistle, Wolfe, Warner and McGinest in California will handle postgame duties. For the Giants-Packers on Oct. 9, the network will precede Sunday’s broadcast with a week’s worth of Total Access from Los Angeles, integrating live segments from London. 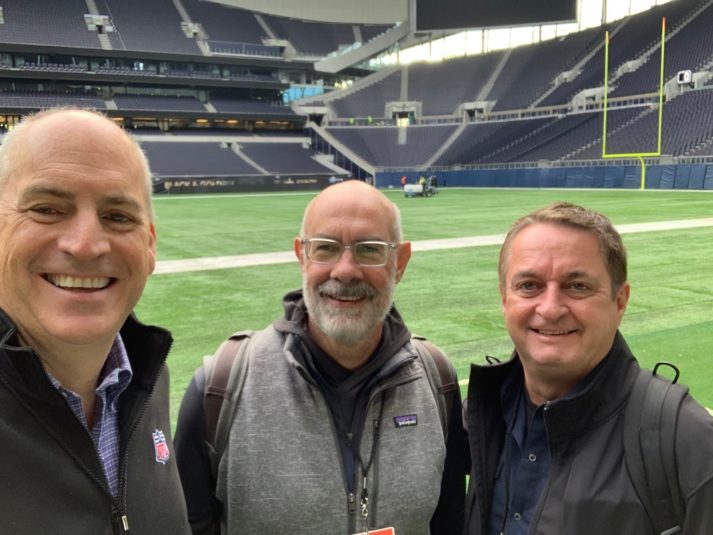 The main linear telecast will be carried on NFL Network, but fans can access all this content live from the new NFL+ direct-to-consumer platform and through NFL Game Pass International outside the U.S. Local broadcast stations in Minneapolis (KSTP) and New Orleans (WWL) will broadcast the game, and fans can listen live via Westwood One, SiriusXM, the NFL app, and NFL.com.

When the ball is kicked off at Tottenham Hotspur Stadium, NFL Network will leverage the production and technical expertise of Fox Sports. Led by SVP, Technical and Field Operations, Mike Davies; VP, Field Operations and Engineering, Kevin Callahan; Director, Operations, Ted Kenney; and Director, Remote Engineering, Matt Battaglia. Inside the venue, the NFC matchup will feature a full arsenal of broadcast technology, including a Spidercam aerial, cart cameras on both sidelines, and full replay coverage to catch all angles of every play. The 22-camera show will be enhanced by new on-air elements with augmented reality. 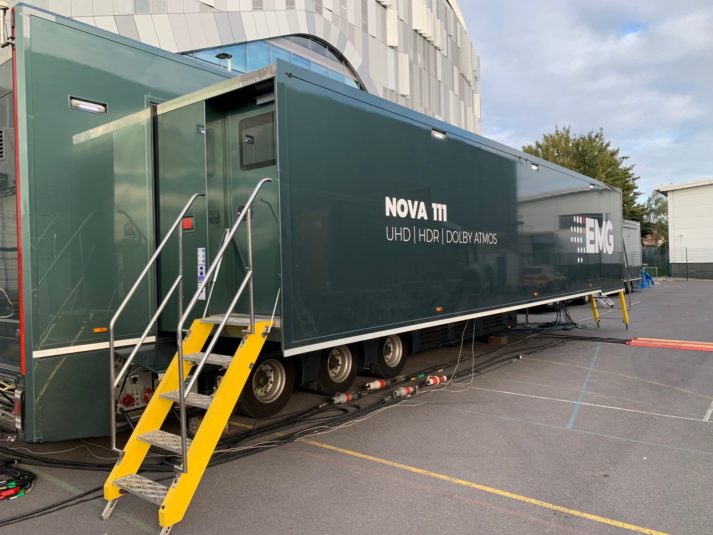 EMG Nova 111 will be the main mobile unit for the Vikings-Saints game on Oct. 2.

In the compound, Euro Media Group (EMG) Nova 111 mobile unit will be parked outside the venue. Working with EMG COO Bill Morris, NFL Media Director, Media Infrastructure, Trey Dillen and Product Manager Fred Bond are configuring the league’s technical and production infrastructure, which will tap a major flypack operation. Overall, the collaboration has set NFL Network up for success in London.

“We are blessed with a great team who are willing to work through the various time zones between London, New Jersey, and Los Angeles,” says Shaw. “We’re also very fortunate to employ experienced people that are producing these shows.”

On the Continent: Allianz Arena in Munich Prepares for Seahawks-Bucs on Nov. 13

After the conclusion of Giants-Packers on Oct. 9, the NFL Network’s sights will be set on Munich for the first NFL game in Germany: the Seattle Seahawks and Tampa Bay Buccaneers on Sunday, Nov. 13. Unlike Tottenham Hotspur Stadium, Allianz Arena isn’t accustomed to hosting American football. Opened in 2005 as the new home of FC Bayern Munich, the venue is the second-largest in Germany but wasn’t built for non-soccer events. When the NFL decided to expand its international footprint to include a game in Munich, the league worked with DFL Bundesliga, the country’s top soccer organization, to implement the necessary physical changes. 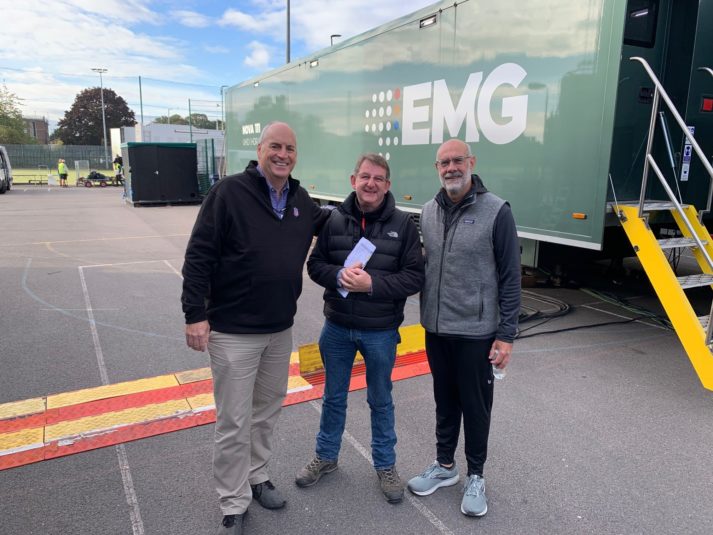 “The arena has been working hard to accommodate our requirements, including adjustments to the field, locker rooms, and camera positions,” says Shaw. “We’ve created a great relationship with the DFL Bundesliga.”

Besides the three games that NFL Network is participating in, the league will play two more games outside the U.S. On Sunday, Oct. 30, the Denver Broncos and Jacksonville Jaguars will play in Wembley Stadium in a suburban London, the first NFL game to be aired exclusively on ESPN+. On Sunday, Nov. 21, the San Francisco 49ers and Arizona Cardinals will play at Estadio Azteca in Mexico City on ESPN’s Monday Night Football. That game will mark the league’s first time in the country since the COVID-19 pandemic. From the league’s perspective, the work of its broadcast partners will only heighten the appeal of the game.

“They’ve all produced great coverage of these international games,” says Shaw. “It’s important that we continue to maintain the highest standards of broadcast while also having fun with the fans.”

Over the years, American football has grown in popularity internationally. Once a far-fetched dream, the league has seen growth in London and Mexico City and will soon reach televisions in Germany for the first time. 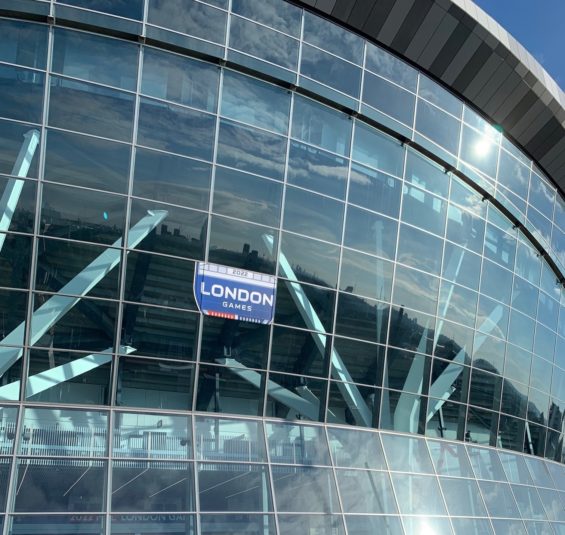 Though with the league since 2010, Shaw is still amazed by the allure that this game has globally. “I continue to be happily surprised at the growing interest of American football in each city I have been to. For a technical and operations person, it’s exciting to wear the NFL logo in these areas that continue to build and soak in the sport we have come to love so much in the States.”