Temperatures are plummeting, leaves are changing color, and the 2022 MLB Postseason is on this weekend’s sports calendar. With the league’s expanded playoff format, ESPN will be at the controls of two American League matchups, No. 3 Cleveland vs. No. 6 Tampa Bay and No. 4 Toronto vs. No. 5 Seattle, and two National League matchups, No. 3 St. Louis vs. No. 6 Philadelphia and No. 4 New York Mets vs. No. 5 San Diego. The broadcaster will mix and match production philosophies with two full onsite shows and two of the remote variety.

“Initially, we looked at what models made the most sense and how we could split [our strategy] up,” says Paul Horrell, remote operations manager, ESPN. “We knew that there was a bit of limitation in Bristol, CT, so we looked at our budgets and the available resources and knew that we’d do two full onsite productions and two with the REMI model.”

A broadcasting schedule of more than 20 nationally televised games isn’t easy, but, when it comes to the postseason, the hardest part of the job is the waiting. Before all 12 seeds were locked up, ESPN’s operations team needed to lay low and see how the bracket would shake it out. 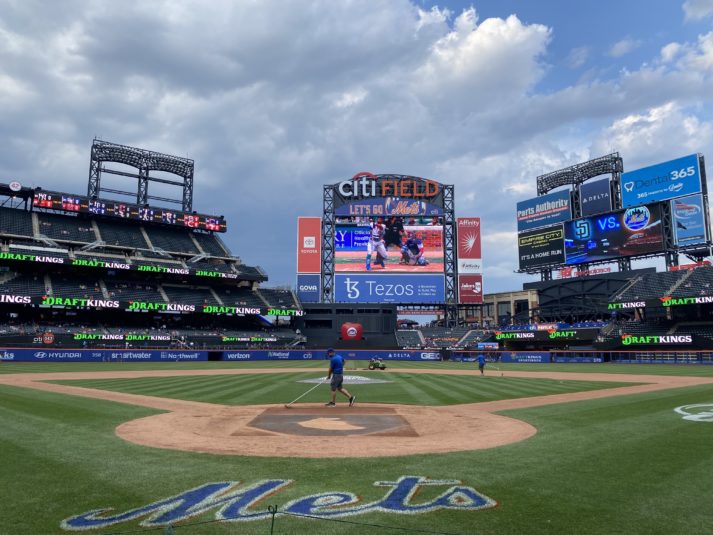 After a tight race for the NL East, the New York Mets will host the San Diego Padres at Citi Field in the NL Wild Card game.

First, it was the fight between the Tampa Bay Rays, Seattle Mariners, and Toronto Blue Jays for the first Wild Card spot. Prior to the final week of the season, the three clubs were within five games of each other in the standings. The jostling for home-field advantage in the opening three-game series forced Horrell and his crew to devise different scenarios.

The 3,113 miles between Tropicana Field in St. Petersburg, FL, and T-Mobile Park in Seattle makes for a very long trek. Toronto’s Rogers Centre is a bit closer to both T-Mobile Park and Tropicana Field — 2,477 miles and 1,352 miles, respectively — but requires crossing the U.S-Canada border and, thus, coordination with ESPN’s mobile-unit provider, NEP Group.

“We had to coordinate with them to protect any eventual outcome or scenario,” says Horrell. “We started securing trucks, so M-7 was going to cover Seattle and Supershooter 16 was going to cover Tampa Bay. Those would’ve been full REMI [productions].”

The battle for the National League East crown between the New York Mets and defending World Series champion Atlanta Braves posed the same uncertainty. On June 1, the Mets had a chokehold on the division, with a 10½-game lead over the Braves, but, in August and September, the Mets’ grip on their first NL East title in seven years slipped. Last weekend, the Braves were nipping at their heels heading into a three-game series at Truist Park. Five days and a sweep of the Mets later, Atlanta was wearing division-championship shirts having defeated the Miami Marlins on Oct. 4. If the title hadn’t been decided before the final game of the regular season on Oct. 5, the broadcaster was planning to park NEP NC11 — the dedicated mobile unit for the Wild Card Series now being played in Flushing, NY — at a location eight hours from Atlanta’s Truist Park. Even though one or multiple “Game 163s” could be eliminated, the addition of new teams to the playoffs and the overall unknown of game locations is still a substantial hurdle.

“There will always be logistical challenges,” says Horrell. “Even when it was a single Wild Card game, we had to protect ourselves in multiple locations, and, with the expanded format, it’s the same thing four different times. You run with a lot of what-ifs, but, as it starts to become clearer, we can start executing our plan.”

Since half the bracket will be produced remotely, both the Blue Jays-Mariners and the Mets-Padres series will be done that way. Given the challenges of bandwidth and combating COVID-19 north of the border, the three-game series at Rogers Centre will deploy the enhanced world-feed model that debuted during the pandemic-shortened season in 2020. The foundation of this model will be the work of Dome Productions and its Toronto-based operations. For instance, the company’s Atlantic mobile unit (the truck used by Sportsnet for regular-season Blue Jays games) will control the productions, and, except for a remote specialist and operations producer from ESPN, a majority of the onsite workforce will be supplied by the mobile-unit provider. All camera feeds, including five ESPN-operated feeds, will be transported to Bristol via fiber. Four Bristol-based EVS operators will handle replay. 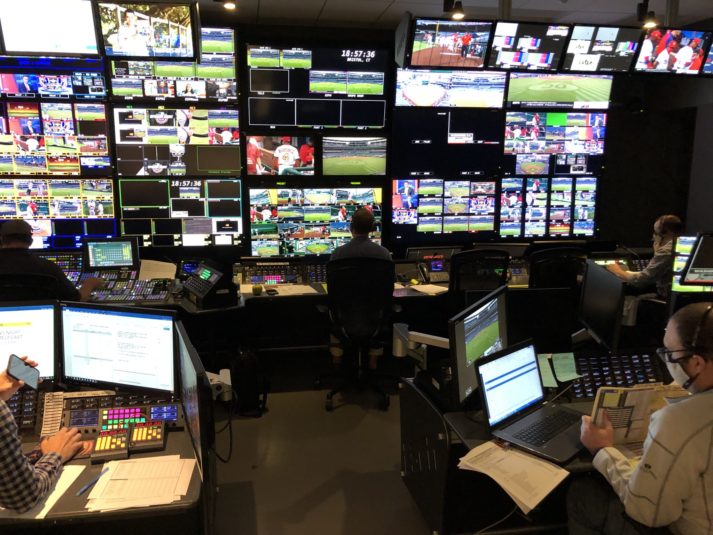 Seen here during the 2020 season opener, an enhanced world feed will be produced for the Mariners-Blue Jays series in Toronto.

As for the other three series, ESPN had to get ahead on a potential Wild Card matchup being hosted in Canada.

“We started conversations about a month and a half ago because we didn’t want to get down to the wire and have to move an entire crew off to Toronto,” says Horrell. “After talking with [VP, Production] Phil [Orlins], his team, and the team with the Blue Jays, it made a lot of sense to move forward with this model.”

For Mets vs. Padres, the setup will be simplified. From NEP NCP11 mobile unit, a total of 28 paths will be transmitted from the compound at Citi Field to a control room in Bristol. The REMCO method will handle remote graphics, and replay and playback will be split, with four EVS operators in Bristol and three in the onsite truck.

Despite the remote approach, each announce team will be calling the game from the stadium. In New York, it will be the lead SNB team of play-by-play commentator Karl Ravech, analysts Eduardo Perez and David Cone, and field reporter Buster Olney. In Toronto, the booth will house play-by-play commentator Dave Flemming, analysts Jessica Mendoza and Tim Kurkjian, and field reporter Coley Harvey. In addition to English-language coverage, the production and operations staff from ESPN Deportes will be onsite in Toronto and New York.

Both Guardians-Rays and Cardinals-Phillies will deploy pre-pandemic workflows and staff sizes. With nearly 100 onsite personnel at each site, productions will be a full onsite effort similar to high-profile Sunday Night Baseball telecasts and major tent-pole events, such as the MLB Home Run Derby. 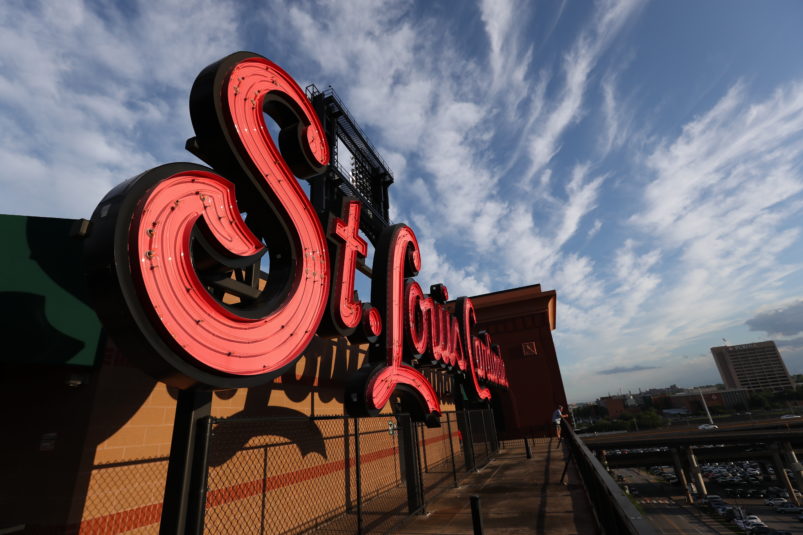 Continuing the regular-season practice, in-game player conversations will be featured throughout the weekend. IFB communication between a player on the field and the commentary team in the booth offers fans an entire season’s worth of in-depth discussions about the game and a close look into the personality of the player.

On the camera side, the Sunday Night Baseball complement will return for the postseason: 10 hard cameras, including four to six with super-slow-motion capabilities; a shallow–depth-of-field RF handheld; and field microphones buried beneath the surface in every venue except Rogers Centre. Specifically in St. Louis, the team will have an ESPN-operated drone and an aerial Flycam system.

Another Year in the Books: ESPN’s MLB Productions Are Improved in 2022 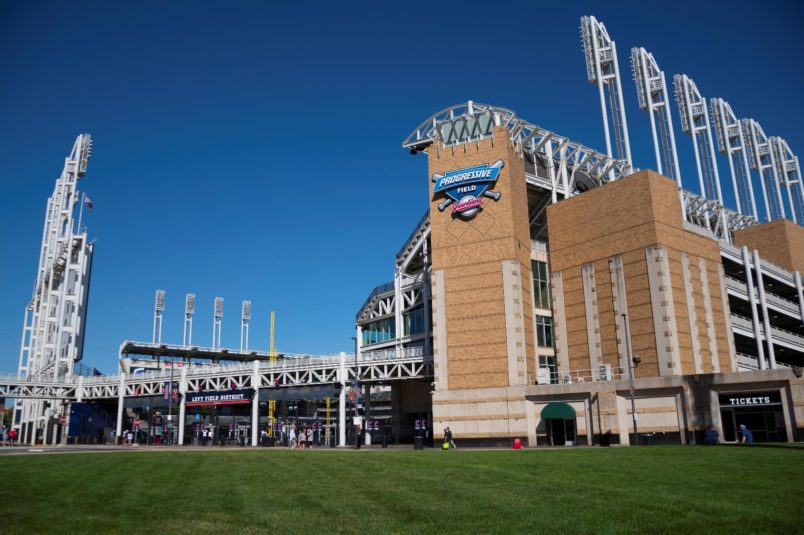 The Cleveland Guardians will play in their second AL Wild Card at Progressive Field against the Tampa Bay Rays.

“This is the first year that we’ll be able to fully engage all four locations,” says Horrell. “It takes a lot of resources and planning, and NEP has been a great partner with us the entire way.”