Pac-12 Networks Wins Rocky Mountain Regional Emmy Award for Our Stories: Made For It: The 2020-21 Arizona Wildcats

Pac-12 Networks’ production of “Our Stories: Made For It: The 2020-21 Arizona Wildcats,” presented by Carvana, telling the story of the Arizona women’s basketball team who reached the all-Pac-12 national championship in 2021, was the recipient of the Rocky Mountain Regional Emmy® Award from the Rocky Mountain Chapter of the National Academy of Televisions Arts & Sciences (NATAS) for the best in the Sports Program Post-Produced or Edited category. The Emmy award represents excellence in programming and individual craft achievement in television and media arts.
“This Emmy recognizes the amazing work of our production and content teams who showcase our Pac-12 student-athletes and programs at an exemplary level,” said Pac-12 Networks President Mark Shuken. “We are excited to add to our Emmy collection, and to continue to deliver award-winning content to Pac-12 fans.” 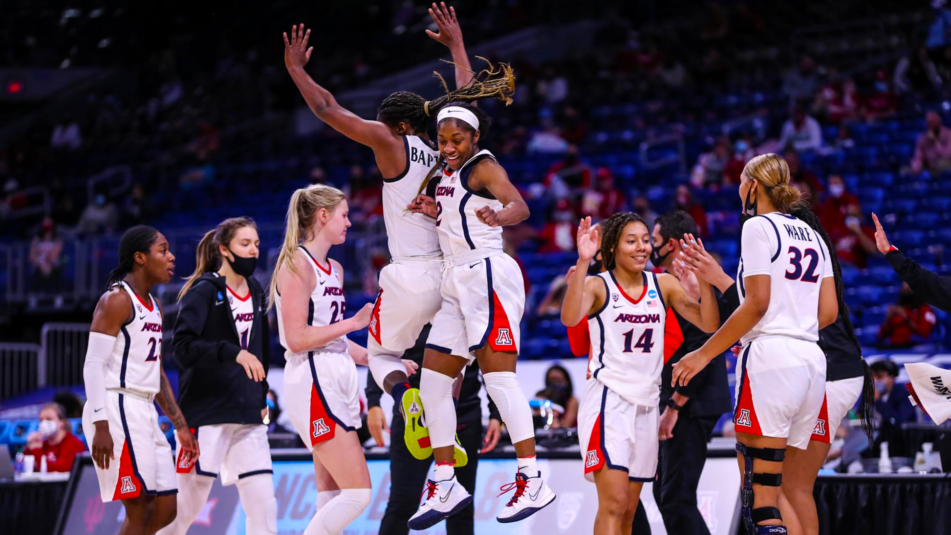 The episode was produced and edited in a fully-remote setting by Ashley Adamson, Jessica Altman and Jack Winton in collaboration with Arizona athletics’ video department. “Our Stories: Made For It: The 2020-21 Arizona Wildcats,” presented by Carvana, provides a behind-the-scenes look at the 2020-21 Arizona women’s basketball team who reached the NCAA National Championship in its first NCAA Tournament since 2005. The installment turns back the clock to when head coach Adia Barnes was a player for the Wildcats, and features exclusive footage and interviews with Barnes and All-Pac-12 honorees Aari McDonald, Cate Reese and Sam Thomas.
This is the second Emmy award garnered by Pac-12 Networks this year after Ann Schatz was the recipient of the Northwest Regional Emmy® Award for the best in the Sports Play-by-Play/Analyst category. It is the first-ever Emmy for Adamson, Altman and Winton.
The recognition continues for Adamson, who will be honored in New York on Tuesday, Oct. 11 after being named an honoree at the Cynopsis Top Women in Media awards in the Game Changing On-Air Talent category.
Fans can watch the award-winning episode on Pac-12 Insider on Thursday Oct. 6 at 5 p.m. PT / 6 p.m. MT, as well as on Pac-12.com.