History will be made on Saturday evening: for the first time in the league’s history, the National Women’s Soccer League (NWSL) will crown its champion on a national broadcast network in primetime.

The Kansas City Current and the Portland Thorns will battle for the 2022 Ally Financial NWSL Championship at Audi Field in Washington, DC (8 p.m. ET, CBS), and the league and its broadcast partners CBS Sports, NEP Broadcasting, and VISTA Worldlink are onsite in full force with a setup worthy of a championship night. 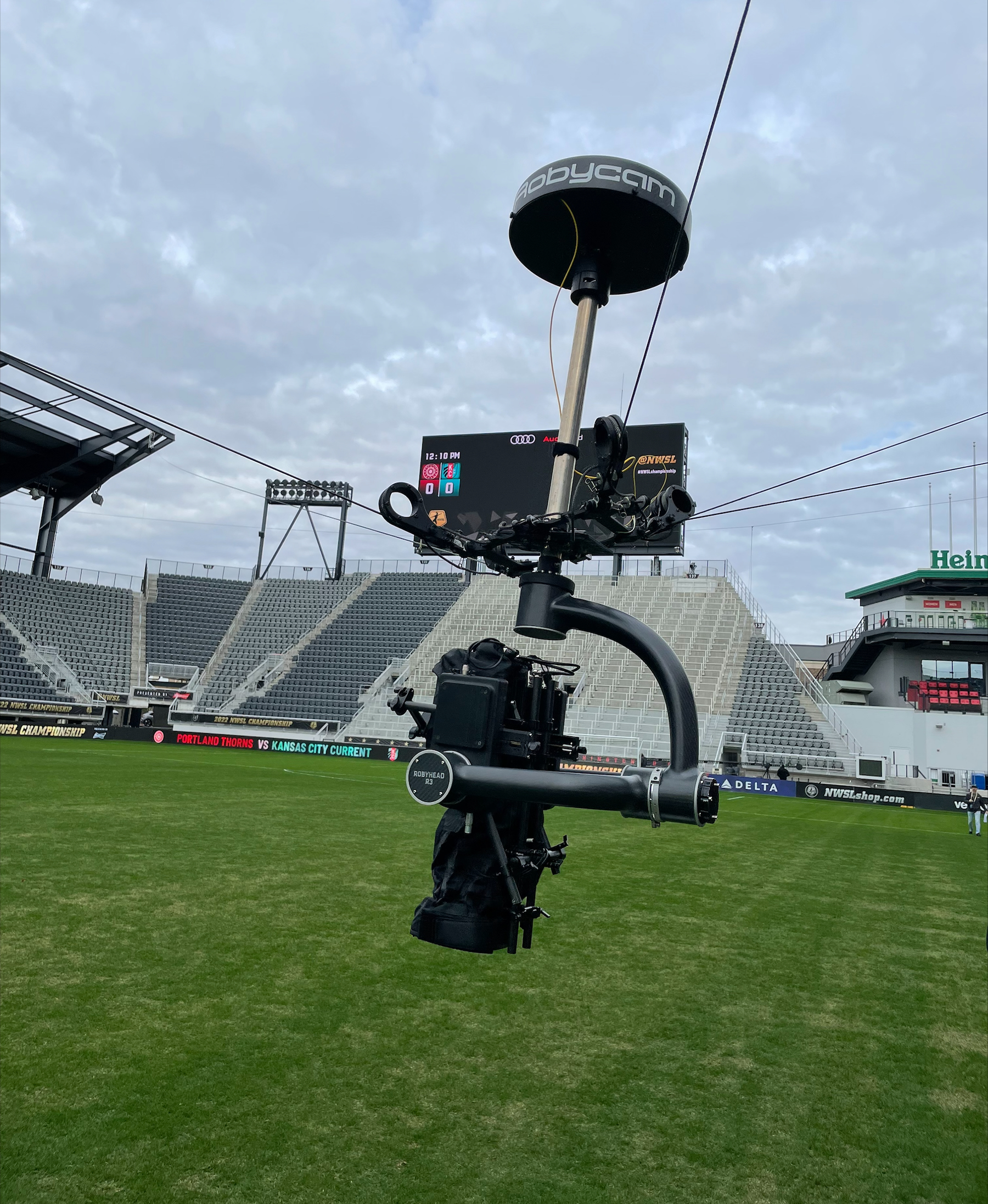 “This is going to be the biggest audience that we’ve ever had for an NWSL match,” says Brian Gordon, executive producer, media and marketing, NWSL. “We’re extremely excited for this.”

Production of the match will feature 23 cameras, including a couple of key firsts that promise to take the live match coverage to places NWSL matches haven’t gone before.

First, patrolling the skies will be the four-point aerial camera system Robycam from Movicom (the Rome-based production vendor with an American office in Los Angeles). It may not be as popular in the U.S. as Skycam or Spydercam, but it has been used this year on major events ranging from Six Nations Rugby in Italy to UEFA and Bundesliga matches. It also worked the 2019 FIFA Women’s World Cup in France.

The aerial camera is one tool that Gordon is excited to see in action because it hasn’t been deployed on an NWSL match before.

“That’s going to be something we are going to be very judicious with,” he says, “Picking the right time to use that will be key: whether it’s on corner kicks or as a replay angle on a goal. It’s very easy, though, to get excited about a new toy and overuse it. I worked for [producer] Fred Gaudelli and [director] Drew Esocoff for four years on Monday Night Football and learned that you want to be judicious; stay within your regular game plan and bring in the new toys and make sure you use them judiciously. That’s what we are going to do [in this match].” 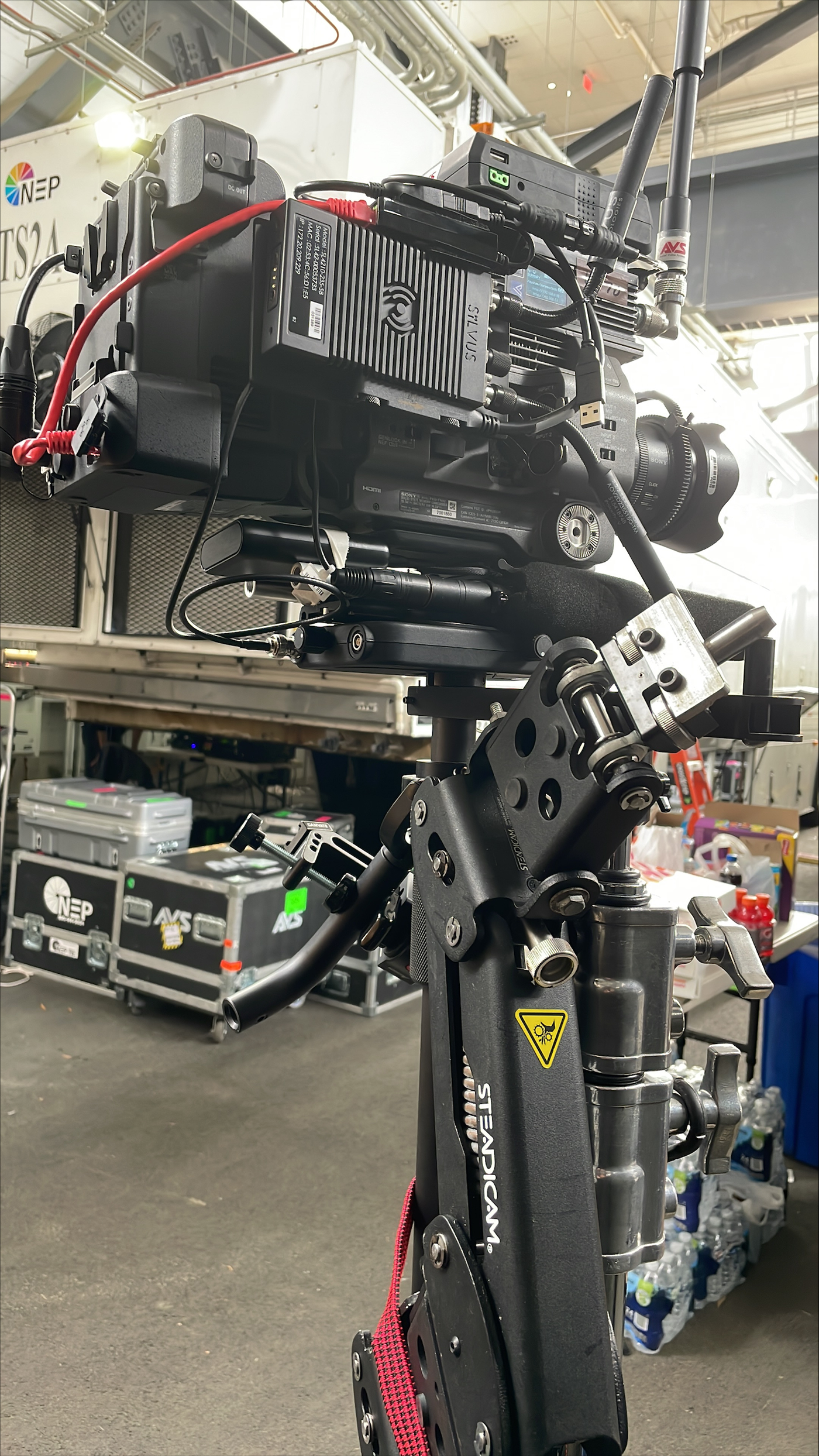 For the first time, an NWSL broadcast will feature an on-field Steadicam that can run onto the field at selected stoppages in play. The system is a Sony FX9 with a prime lens on a Steadicam rig.

Second, the league has also cleared an on-field Steadicam. A Sony FX9 outfitted with a prime lens will be used to be capture shots along the sideline and has permission to go on the field for pregame warmups and during quick stoppages of play (for example, during a goal celebration).

Gordon notes that getting permission to allow the Steadicam to access the playing surface took substantial talks with the players union, the league’s officials, and the clubs themselves but, at the end of the day, it would play a huge part in delivering a big-game feel to the production.

“I’m amazed when I watch MLB [Postseason] and that operator is right there on the field as a player is making his home-run trot,” he says. “In soccer, that’s not normally done. We want to push that envelope because we feel, on this stage, that we want our coverage to be comparable to what the biggest leagues and networks are doing. This is a primetime show and a championship. It’s as big of an event as we’ve ever had, and we want it to look like that.”

To pull off some of these firsts, leadership has come internally from league reps like Gordon (who is in his first year with the NWSL), NWSL Director, Broadcast and Production, Megan Buchan, and Commissioner Jessica Berman.

These tools also serve one of the key goals of the broadcast: showcase the stars of the league. Gordon acknowledges that the match’s place in a national primetime window does affect the storytelling strategy. The approach is to deliver a welcoming show that viewers of various experience levels watching soccer can appreciate.

“We are going to have so many new viewers of the NWSL [for this match] that we need to educate on our personalities and storylines,” he says. “How did these teams get here? Viewers might not know that it came down to the last weekend [of the regular season]. Seven teams had a chance to make the playoffs. Then, of course, it’s all about our stars. Having [Portland Thorns forward and NWSL MVP] Sophia Smith in his game is [great], and we want to educate our viewers about her.

“From a coverage standpoint,” he continues, “we don’t want to be too technical. It’s very easy for casual fans who don’t typically watch soccer to get lost. There may come a time to talk about the technical, but there is a lot more focus on introducing our athletes, introducing our game, and introducing the league because of our new [television] audience.”

From the front bench, the game will be steered by producer Neil Gallow and director Mike Roth. The match will be called by an all-female crew of Jen Hildreth on play-by-play with analyst Aly Wagner. On the sidelines will be Lori Lindsey and Jenny Chiu. On the Twitch side, the match will have its own announce team of Maura Sheridan and Anna Witte. 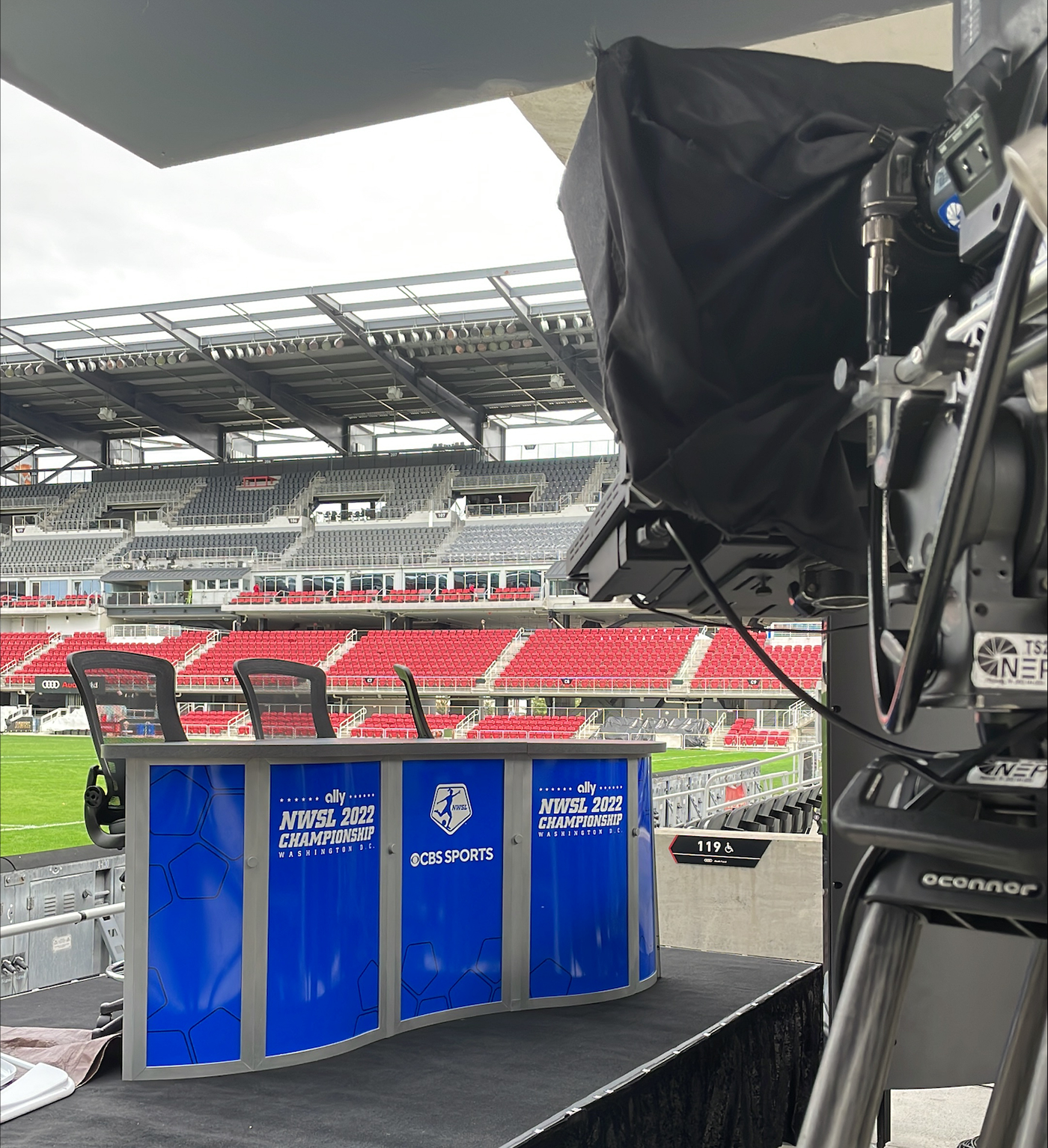 Pregame and halftime coverage will be produced by CJ Bottitta and directed by Jamie Kiley. The onsite set with be anchored by host Kate Abdo and will feature analysts Jordan Angeli and Gotham FC forward and USWNT member Midge Purce.

In the production compound, Tech Manager John Brown will be making the magic happen. Two 53-ft. expando units are parked outside Audi Field: NEP TS2 is dedicated to the main game coverage, and ND6 will anchor all pregame and halftime coverage from the onsite studio. The onsite production is an exciting step up for the league and the crew working on the show.

Typically, nearly all the league’s 176 matches in a year are produced via an at-home workflow, with camera and audio feeds sent to control rooms in VISTA Worldlink’s South Florida facilities. Even though any match airing on CBS broadcast is an onsite operation, VISTA still plays a key role. VISTA VP/GM Anthony De Vista and Operations Producer Paul Surace manage the budget, logistics, and planning for events like this weekend’s Championship Game and all season long as well.

CBS Sports also makes key contributions behind the scenes. CBS VP, Remote Production, Steve Karasik has been essential to the plans, and producer Rachel Komyati is responsible for an opening tease that will air prematch and features voiceover by actress and Angel City FC founder Natalie Portman.

“We have to thank Ally Financial and CBS Sports because, without their support, this [primetime] window doesn’t happen,” says Gordon. “We’re extremely excited.”

The Ally Financial NWSL Championship kicks off at 8 p.m. ET on CBS and Paramount+ and internationally on Twitch, with live prematch coverage streaming exclusively on Paramount+ beginning at 6:30 p.m.