Those were the now infamous last words that NBC Olympics analyst Rowdy Gaines uttered into his headset to his on-air partner Dan Hicks as Frenchman Alain Bernard entered the pool to anchor the men’s 4x100m Freestyle Relay at the 2008 Summer Olympics in Beijing.

A gold medal and a world record seemed all but secured for the dominant French squad when American Jason Lezak dove in seconds later and embarked on what some have called the greatest swimming relay leg of all-time and what is, easily, one of the preeminent U.S. sports-television moments of this century.

It was 46.06 seconds of pure television gold as Lezak closed the gap and 107 million Americans (according to Nielsen Media Research) screamed at their screens back home. 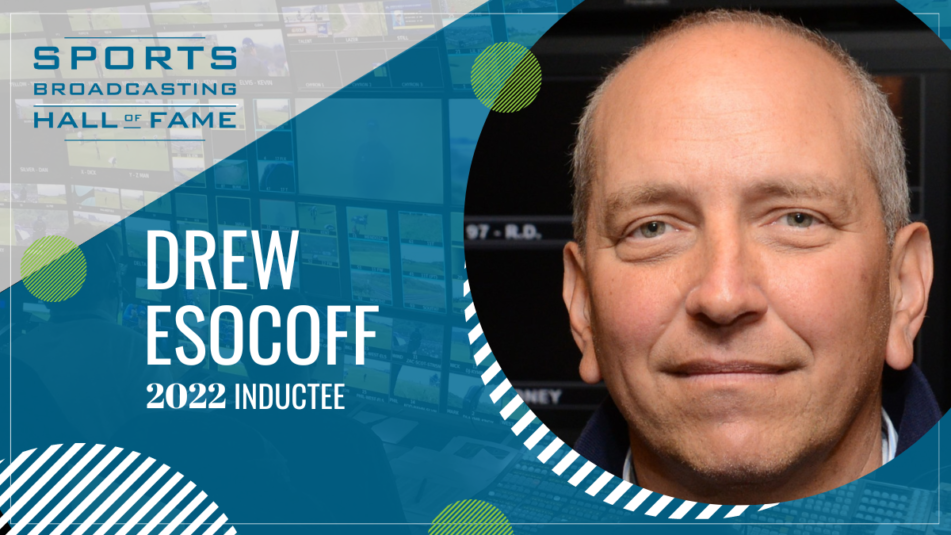 Those viewers may not have known it, but they had just the man for the moment on their side. No, it wasn’t Lezak. It wasn’t even the legendary Michael Phelps – who, in that relay win, secured the second of what would be eight gold medals at those Beijing Games, a record for most golds won by an athlete at a single Olympics. No, the Monday-morning race in China had placed the moment squarely into Sunday-night primetime. Just the night of the week you’d expect the very best from director Drew Esocoff.

“Drew has the one trait every great director embodies: he’s always where he should be, when he’s supposed to be there,” says Fred Gaudelli, a 2020-21 Sports Broadcasting Hall of Fame inductee and Esocoff’s longtime NFL producing partner on both Monday Night Football on ABC and NBC Sunday Night Football. “His shots are always the right shots editorially. He’s not off looking for the most cinematic shot; he’s serving the sports fan and giving them what they need to process what has happened.”

Go back and watch the live cut of that relay, which aired live on NBC that August night. The Lezak leg is clean, simple, old-school storytelling. Esocoff makes just four camera cuts the entire leg, refusing to get in the way of the audience’s ability to not only enjoy but visually perceive the rapidly shrinking gap between the lead swimmers. Just the pure athletic achievement of the swimmer, the shocked emotion of the on-air talent, and the absolute thrill on the faces of the American teammates following the finish. Minimal high-end technology, no advanced analytics needed. Esocoff didn’t even cut to the commonly used underwater camera that followed the swimmers. This was a sports moment speaking for itself.

“I sometimes think, when you try to be overly creative in a sporting event, you lose track of what’s important,” he explains. “People are used to watching events a certain way, and I don’t want to disorient viewers. I think what has been primarily responsible for my success is that I am a huge sports fan.”

It’s easy to know what the sports fan wants — and needs — to see in a given moment when you are a rabid one yourself. That raw love of sport and a tremendous skill to remain committed to the story in the highest of high-pressure situations have helped cement Esocoff as one of the all-time greats in the director’s chair. A winner of 19 Emmy Awards, his career has included calling the shots on seven Super Bowls, multiple NBA Finals, years of Triple Crown horse races (including Triple Crown winners in 2015 and 2018), and, in what is perhaps his calling card, 23 years (and counting) of directing primetime NFL, including the past 17 on NBC Sunday Night Football.

“Drew Esocoff should go down in the annals of broadcasting history as the best sports-television director ever,” says Al Michaels, veteran play-by-play man and 2013 Sports Broadcasting Hall of Famer, who worked with Esocoff for many years on both Monday Night Football and, of course, Sunday Night Football. “If he doesn’t, it’s simply because he never tooted his own horn. All he did was go to work 1,000% prepared, bring his artistry to the table every single time, and gain the love and respect of every person he collaborated with.”

Sports television muscled its way into Drew Esocoff’s life rather aggressively when he was young. After graduating from Colgate University in 1979 with a degree in political science, he landed a job on Wall Street. He was miserable. It took only nine months to pull the plug and dramatically change the direction of his life. He retreated to his hometown of Elizabeth, NJ, to work at a radio station and even took a parttime job at Sports Phone, the old service where fans could call a dedicated phoneline for up-to-the-minute scores. He also worked weekends as a runner and researcher on college football for ABC.

It was in 1983 when he finally got his first fulltime opportunity in the industry, working on studio shows for ESPN. Taking advantage of available opportunities, he rapidly rose through the ranks and directed episodes of SportsCenter and Baseball Tonight until 1985, when he moved to the live-remote-events division.

“I found the second-by-second stuff so much more exciting,” Esocoff says of directing live games. “If you mess something up, there’s no spell-check in live TV. You correct it, and you move on; I think that the second-by-second deal was just more fun for me. I get more of an adrenaline rush that way. It’s just a lot of fun.”

He directed his first live production at a Top Rank boxing match in Indiana. Soon after, he directed his first live football game: a 23-3 Temple victory over Akron in 1987 at old Veterans Stadium in Philadelphia. He was soon directing everything at ESPN — college football, college hoops, even hockey — before receiving the call to move over to ABC Sports, shooting his career path into the big leagues.

At ABC, Esocoff built a reputation for himself as an elite storyteller, an outstanding selector of camera angles, and a humble, easy-going guy to work with. It earned him marquee assignments, such as NBA on ABC (which included directing the NBA Finals), the Little League World Series (he was at the front bench when a squad from Toms River, NJ, led by future Major Leaguer Todd Frazier won the world championship in 1998), and, eventually, the highest-profile gig of them all: Monday Night Football.

“He’s a mind-reader,” says Michaels, noting that he has done more than 750 telecasts with Esocoff. “Thousands of times, I’d be thinking of something to say, and, as the words start to come out, he has already punched up the shot I’d be looking for. It was almost scary.”

In 2001 at Monday Night Football, Esocoff joined forces with producer Fred Gaudelli to form what would become one of the great producer-director tandems in sports-television history. The two sat at the front bench together for 22 straight years of primetime NFL telecasts, six at ABC on Monday Night Football before migrating to NBC Sports together in 2006 to launch NBC Sunday Night Football.

“Drew is an incredibly important part of what has made Sunday Night Football such a dominant success story,” says Mark Lazarus, chairman, NBCUniversal Television and Streaming. “His ability as a director and leader has enhanced many NBC Sports events. He is a positive influence on our culture and in sharing his experience to teach others. He also happens to be a Hall of Fame person. It’s a privilege to be his colleague and his friend.”

During Esocoff’s time at Sunday Night Football, the show became one of the most successful properties in sports-media history. It has reigned as primetime TV’s No. 1 show in all key metrics for 11 consecutive years. It has also won the Sports Emmy Award for Outstanding Live Sports Series a record 11 times. As for being a key piece of that success, the always humble Esocoff scoffs at the notion.

“You start out with Al [Michaels],” he says, “who’s the greatest play-by-play guy of all-time. You add [2010 Sports Broadcasting Hall of Famer] John [Madden] who, at that point, was the greatest analyst of all-time. You bring in Freddy [Gaudelli], who is the greatest producer of all time, and that’s a good way to start. The league’s commitment to give us great games, though, is probably the most important thing. I am a very minuscule part of some great teams, and I believe that. I just try to keep the nose of the airplane pointed down the center of the runway.”

“There simply is nobody better,” says NBC Sunday Night Football analyst Cris Collinsworth. “Often, when I plan to talk about someone, that person is on the screen before I utter their name. It is amazing. When big moments happen and it is up to Drew to paint the picture with multiple shots, I have learned the best thing that I can say is nothing. We just let Drew do his thing.”

“The most important thing [in being a great live sports director] is to be in sync with your talent,” says Esocoff, “which in turn means being in sync with your producer. When it’s your time to lead, however, ensure that the talent is following you. I try to be very aggressive with the use of split screens, and, if there’s a couple of images on the screen, I need to make sure that the talent knows what point I’m trying to get across. When they can caption that, that’s even better.”

Be it that epic week of swimming at the Water Cube in Beijing in 2008 or when Santonio Holmes pulled down a toe-tapper for the Pittsburgh Steelers in the waning seconds of Super Bowl XLIII in 2009 or when a goal-line interception for the New England Patriots flipped Super Bowl XLIX on its head in 2015 or, months later, as American Pharoah rumbled to a gate-to-wire victory at the Belmont Stakes to secure horse racing’s first Triple Crown in 37 years, Esocoff has met the moment every single time, not just for NBC but for the American sports-viewing public. And he has done it all while remaining one of the more beloved behind-the-scenes figures in the business.

“Before I met Drew, I knew his reputation as one of the best directors in television sports,” says Michele Tafoya, the sideline reporter on NBC Sunday Night Football from 2011 to ’21, “but what surprised me when I started working with him was how humble, fun-loving, and unselfish he is. Everyone loves working with Drew because he is collaborative, respectful, and funny.”

“It is an honor to be on the same team as Drew Esocoff,” says NBC Sports Chairman Pete Bevacqua. “He is one of the most talented people in our industry, and he is the rare person who can combine endless passion with an amazing and unflinching sense of calm, which sets the tone for all of those that are fortunate enough to work beside him.”