FIFA World Cup 2022: For Fox Sports Audio Team, It's a Game and an Entertainment Production in One

Sound will be a big part of Fox Sports’ presentation of the FIFA World Cup Qatar 2022, starting this weekend.

Fox Sports’ A1s Joe Carpenter and Ed Verstraite will be managing what Carpenter describes as “kind of like an NFL studio show, only much bigger.” With the 5.1 mix coming in from the IBC, the workflow is similar to that of an Olympics. Fox Sports’ audio team will be managing that audio and blending it with sound from the set. The audio will include feeds from Fox’s own microphones positioned on Flycams and cranes and from field reporters on the pitch, as well as sound effects to support the network’s ambitious and dynamic graphics for the broadcast.

From the broadcaster’s new state-of-the-art set on Doha’s Corniche waterfront promenade, “we’ll start the day with a pregame show, previewing the day’s upcoming games,” Carpenter says. “We’ll welcome in the guys at the stadium, talk back and forth, throw to the field reporter on the pitch, then go to the game. At halftime, the stadium will throw it to us; same thing postgame. Then we’ll do cut-ins to all the other Fox Sports shows. Meanwhile, a stage will be dedicated to a Home Run Production setup in Pico [Fox’s Interactive Media center in Los Angeles]. Ed and I are essentially integrating the games’ audio at the stadiums in pregame, halftime, postgame, and highlight [sections]. It’s very much a team effort.”

The FIFA World Cup Qatar 2022 production covers a lot of new ground, and most of that real estate is made of IP.

“This is one of the first big IP installations I have ever worked on and it’s a steep learning curve for everyone,” Glenn Stilwell, EIC for the Corniche set, told SVG earlier. “In the real world, IP core technology is still new, and we’re all still learning how systems work. Most broadcast engineers will understand baseband routers intimately, but IP is a very different discipline.”

It’s appropriate, for a very different World Cup. This year, all the games will be played in a single location, Doha, and within a relatively condensed time — the shortest since 1978 — with the final taking place 28 days after the opening match between Qatar and Ecuador on Nov. 20; the final is slated for Dec. 18 at the 80,000-seat Lusail Iconic Stadium. Also, for the first time since the tournament’s inauguration in 1930, it will kick off in the winter instead of the summer.

FIFA’s stated intent is to make this World Cup more fan-centric than ever: “What [broadcasters] tell us most is that they want to see as much as possible to do with fans interacting with each other.” A newly created “fan-coverage” channel is part of the World Cup multipackage channel offering, according to Florin Mitu, head of host broadcast production, FIFA.

With that goal in mind, Carpenter and Verstraite will buttress the IBC mix with Fox’s six proprietary stereo crowd microphones as well as with the wide array of SFX and music stems coming into Fox Sports’ control room. 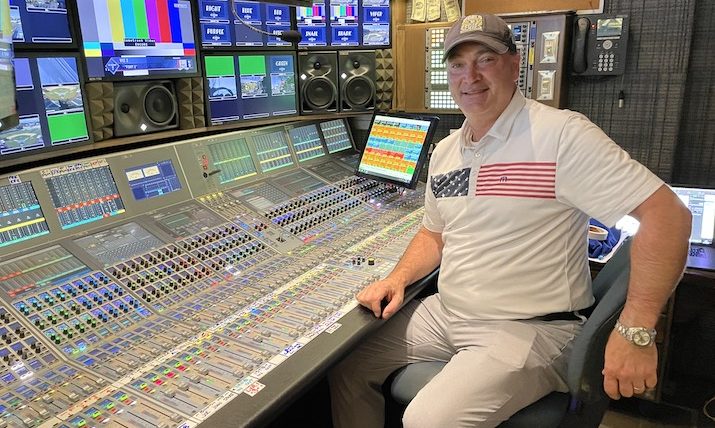 A1 Joe Carpenter: “The goal is to make the entire event as exciting and engaging as the game itself.”

“They give us a lot of source material to choose from,” Carpenter says, “plus we have our own microphones and commentary audio, and plenty of tape rolls and virtual sources. But there will also be a ton of other visuals that will need their own audio, too. You just look around and see how massive it is, with cranes and Flycams and other elements, and realize that it’s going to be its own kind of mix.”

On top of that, as Stilwell points out, the audio crew is working on largely new territory. It may be digital, which audio has been for over a generation now, but IP takes it into a new realm.

“I’m a bit of an old-school person in the sense that I like to see that things are physically patched into something,” says Carpenter. “But I also see the advantages of IP infrastructure, like being able to check things without patching: you don’t have to break a signal in order to check it. And it can be virtually patched as many times as you want somewhere else.

“Sources become infinite,” he continues. “That’s an advantage. [It’s] much like we once made the jump from analog to digital, then we made the jump from digital to different flavors of digital, to MADI and now Dante. I think the next level of virtual is only going to make things easier. We just have to work with that while we also focus on mixing the game.”

As dense visually as the event promises to be, Carpenter says he can match that aurally, using the array of sources to create a unique sound design for the show. For instance, to support the sense of movement, he has been practicing “steering” the audio underneath as the “World Cup on Fox” logo flies from stage to stage, the crowd and music ebbing and swelling beneath it as well as in front of and behind the viewer.

“We have a lot of noise over here, with what’s going on behind you in the waterway and the drones and the Flycams and everything,” he points out, referring to crowd and other nat sounds, plus the virtual audio intended to support what promises to be a dazzling bag of AR-type graphics. “The sound design is taking you away from the typical two-dimensional sports element into a three-dimensional entertainment and promotional element on a worldwide stage. The sound design can change the context what you’re experiencing.

“We have a lot of microphones and a lot of ways to bring [viewers] in and out of the present moment,” Carpenter continues. “It’s more than just a set and a desk of people talking stuff about soccer. If you’re listening in 5.1, you’re going to feel that excitement. But, if you’re listening in stereo, it’ll be exciting, too. The goal is to make the entire event as exciting and engaging as the game itself.”