Conclaves of the DTVAG have typically pondered the technical intricacies of new platforms like Dolby Atmos and HDR, but the organization’s event at the SVG Summit on Dec. 12 was far more consumer-facing and aware of how those technologies are finding their way into the world.

“What seemed like pie in the sky just a few years ago — like Atmos, object audio, and remote production — are now a regular part of the business,” said DTVAG Executive Director Roger Charlesworth in his opening remarks at the event, which was sponsored by Audio-Technica, Calrec/DiGiCo, Dale Pro Audio, Dolby Labs, Lawo, Sennheiser, and Telos Alliance.

NBCUniversal Director/Principal Audio Engineer Jim Starzynski, who helped curate the panels, brought up other technologies and features that are part of the imminent ATSC 3.0 update, including allowing consumers to change the relative volume levels of a broadcast’s dialog and surround channels, as well as NBC’s work implementing Atmos on Notre Dame home games.

“We laid down the pipes for this,” he said. “Now it’s a matter of content creators getting the content into them.” 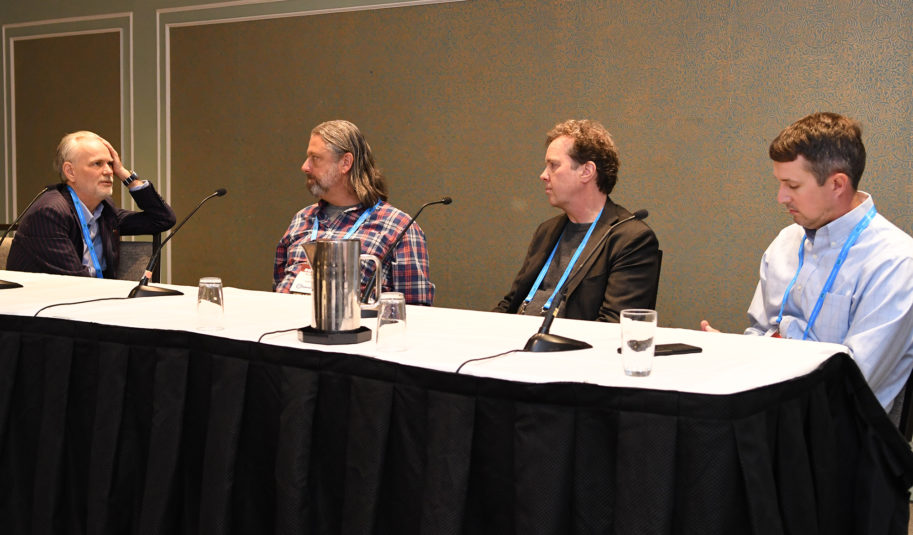 Dolby Director, Pay TV and Streaming, Carlos Watanabe discussed how Atmos and HDR formats have been deployed and integrated by European sports leagues and networks, such as on Germany’s Bundesliga and the UK’s Premier League football broadcasts, as well as nascent efforts by U.S. networks NBC Sports and Fox Sports. What has to happen next, he emphasized, is that consumers have to be made aware of those new technologies and their benefits.

“We have to start communicating beyond the industry,” he told the audience of more than 50 people, noting the millions of viewers experiencing the World Cup via such distributors as TV Globa and Poland’s TVP over the air and Xfinity and Fox Sports on cable. They were using an estimated 1.5 billion Atmos-enabled devices and nearly as many capable of showing DolbyVision, he said, adding that Dolby is currently offering free online training for Atmos mixing.

Accessibility and personalization of audio is also turning a corner. A representative of Comcast’s Accessibility and Inclusive Experiences initiative noted that 7.8 million Americans have significant vision impairments and another 11.5 million have serious hearing difficulties, a problem shared by half the population 65 and older. Those conditions will be addressed by ongoing initiatives that will bring such services as dialog enhancement and dialog-range–compression processing to the home TV through OTT and other providers. Furthermore, voice control and other solutions are being developed for people with motor impairments, such as MS and cerebral palsy. The solutions can include oversized remote-control buttons and non–line-of-sight wireless connectivity for remotes.

“It will be about how everyone can experience television individually,” he stated.

Some of these enhancements are part of the ATSC 3.0 protocols and can be achieved via several pathways: the ST 2110-41 standard, for example, allows any metadata to be carried in a time-synchronized way with the other 2110 data, and the serialized audio-definition model (ADM) will encompass immersive audio, dialog enhancement, multi-language and audio-description support, headphone virtualization, and other features.

“Audio is paying more attention to end users now,” stated Dolby Labs Architect James Cowdery, citing such examples as the BBC’s implementation of ADM, which can include separate home and away crowd sound for sports, “but also to the fact that, as audio becomes more complex, distribution becomes more complicated.” 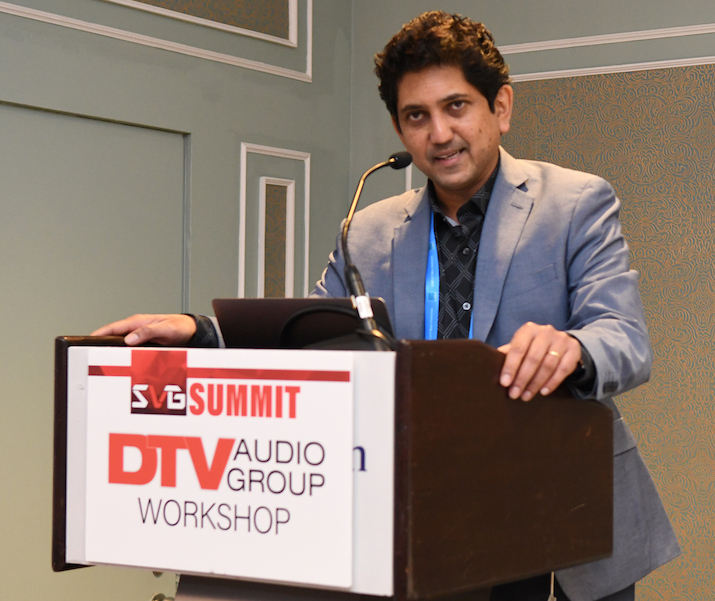 Shure’s Prakash Moorut: “A lot of spectrum coordination will be needed [for the 2024 Paris Games].”

Technical topics were also in abundance, including Calrec reps’ presentations on the audio implications of dynamic adaptive content streaming and on audio production in the cloud environment.

Looking toward the 2024 Paris Olympics, Shure Senior Director, Spectrum and Regulatory Affairs, Prakash Moorut noted that program-making and special events (PMSE) policy for the Games will continue to require the sub-700 MHz spectrum. He pointed out that the relatively small number of venues in the city will be near each other and in close proximity to the Olympic Village.

“A lot of spectrum coordination will be needed,” he cautioned. “Many event producers underestimate actual spectrum needs, and ancillary events such as concerts can take away even more spectrum.”

A spirited panel at the end — historically, the least-scripted and most-engaging parts of DTVAG events — examined, among other things, broadcast audio’s long-term challenge: finding the next generation of A1s and other audio professionals.

Florian Brown, a veteran A1 who mixes NHL, X Games, and other sports, lamented the literal and figurative invisibility of the A1 position: lodged in the back of a remote truck in an industry that emphasizes visuals.

“No one knows the A1 exists,” he said, suggesting that invisibility makes it harder to recruit technical talent. “Many kids of the next generation of creators are already doing what we do but on YouTube and making $100,000 a year doing it. It’s up to us to find them. We can’t just wait for them to come to us.”