Spanish-language broadcaster is prepped for production effort on two continents

This article originally appeared in the Fall 2022 Edition of the SVG SportsTech Journal. To read the entire journal, click HERE.

The 2022 FIFA Men’s World Cup in Qatar is inching closer and closer, and, while Fox Sports is handling coverage for the primary English-speaking audience, Telemundo Deportes is in charge of live match coverage and content generation for the Spanish-speaking market. At the recent SVG Remote Production Forum in Los Angeles, a handful of voices from the company joined the event virtually and in person to set the table on how Telemundo Deportes will pull off this herculean effort, what technologies will connect domestic and international operations, what fans will see via over-the-air and streaming on Peacock, and more.

Producing a large-scale event like the Men’s FIFA World Cup takes a lot of coordination and planning, but, when you add different time zones and thousands of miles of distance, the job can be interpreted as being impossible. To accomplish this feat, the month-long tournament will be centered on a two-pronged approach: one occurring at Telemundo Center in the Miami neighborhood of Hialeah, FL, and one located onsite in the capital city of Doha, Qatar. One person working closely with this strategy is Chris Suarez, sports production operations, Telemundo. Ever since the COVID-19 pandemic began in March 2020, remote workflows have become somewhat of a standard for the sports-video—production community. Since the 2019 FIFA Women’s World Cup in Paris, the industry has taken to remote production and hasn’t looked back. For this iteration of the FIFA Men’s World Cup, Telemundo Deportes will have a production crew on the ground to capture the sights and sounds of the competition in Qatar but will ultimately rely on its stateside headquarters for mass distribution. 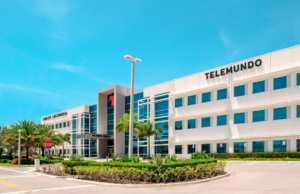 Telemundo Center in Miami will play a large role in Spanish-language coverage.

“Content generation will take place in Qatar, but all of the processing [of elements] that go to air will be done in Miami,” Suarez said. “Instead of having to run back to the IBC to upload material, [this strategy] allows our people in Qatar to focus on other things and provide more coverage.”

On the production side, Telemundo Deportes is tasked with supplying Spanish-language coverage of not only the U.S. Men’s National Team USMNT) but also the teams of its multicultural viewers. Ranging from Lionel Messi’s Argentina and Neymar’s Brazil to Pedri’s Spain and Hirving Lozano’s Mexico, storylines and content aren’t confined to the squad wearing the Stars and Stripes. Leading the charge on the creative front is Eli Velazquez, EVP, sports content, Telemundo Deportes.

“Every respective portion of our demographic has particular nuances that they tap into when they’re celebrating their love of the game,” he said. “One of our mandates was finding voices of authority from different countries that will be playing in Qatar.”

On the other hand, Telemundo Deportes is also responsible for amplifying the story of the USMNT as well as the full picture of what it’s like to play the biggest soccer contest on the planet in this unique country. Given the smaller footprint that this year’s tournament requires, ENG crews will be able to cover a lot more ground in one day.

“We’re also going to cover the stories of every national team because the uniqueness of the World Cup is bringing everyone together through a shared experience,” said Velazquez. “We want to make our coverage as broad as possible to capture audience members that want to join us for the ride.” 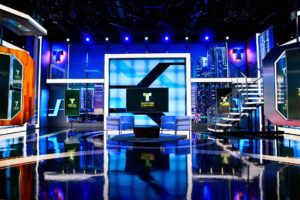 Programming will be coming from Doha and this studio in Miami.

Diving deeper into the broadcaster’s plans, Jorge Duarte, senior director, production engineering, NBCUniversal, and Donatto Punyed, director, technical programs and media systems, Telemundo, shared their expertise on what the execution will look like in both locations. For live programming, shows will come from multiple studios within Telemundo Center in Miami and sets constructed in different locations in Doha. All 64 matches will be called with live announcers via numerous commentator teams in all eight World Cup venues. Via Peacock, viewers will have access to more live and on-demand content than in previous World Cups.

Despite the challenges and obstacles that lie ahead, Telemundo Deportes is excited to get started for many reasons. Sidestepping the ongoing effects of the pandemic and working for years on end to come up with this complex plan are two main examples, but, more important, the broadcaster is looking forward to presenting the beautiful game of soccer on the biggest stage in the world.

Said Suarez, “The buildup towards the World Cup has been a long time coming.”