Getting the Big Picture

When did theatrical television begin? Would you believe 1877? On March 29 of that year, someone using the pen name “Electrician” described a device called an “electroscope,” some sort of image-transmission system — some sort of large-image transmission system. “Electrician’s” letter was published in The Sun the next day (the newspaper most famous for its “Yes, Virginia, there is a Santa Claus” editorial 12½ years later). Below is an excerpt.

Today, operas and plays coming from a single theatre are seen at one time in hundreds of cinema auditoriums worldwide. It’s worth noting that 1877, however, long predates the first movie theatre. 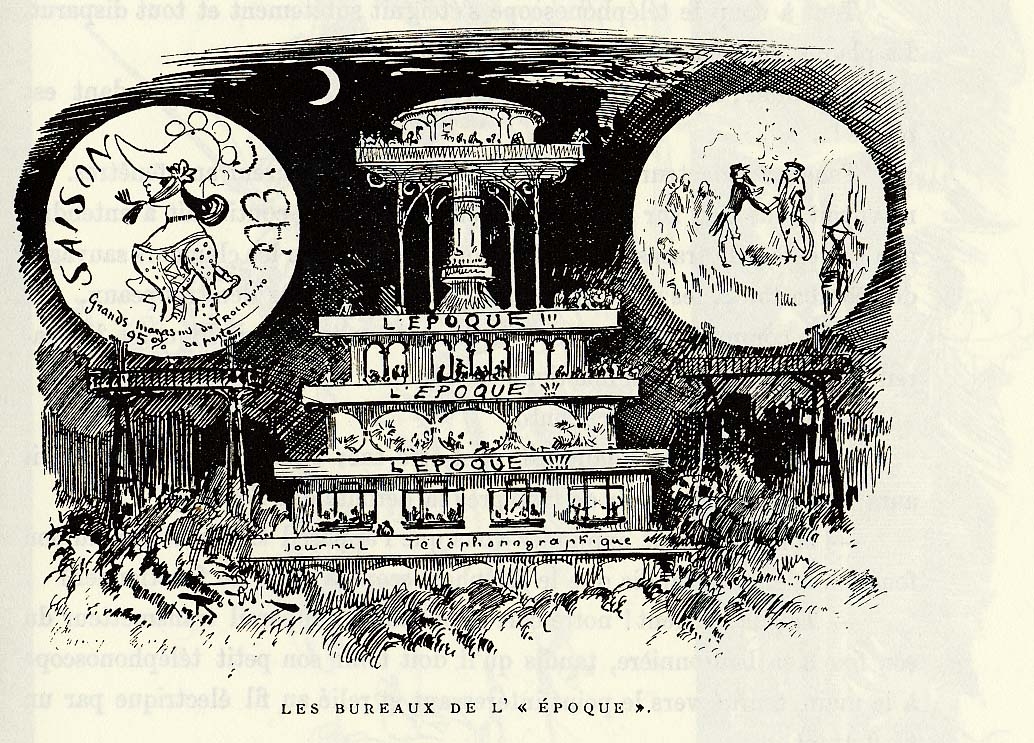 Five years later, in 1882, Albert Robida, in his book Le Vingtième siècle (The Twentieth Century), depicted giant video screens (supposedly 25 meters in diameter, though they appear smaller above) on either side of the towering offices of the news organization, L’Époque. Note that, while the right screen is showing a news event, the left one is running a commercial advertisement.

In 1891, Professor E. Stone Wiggins, a Canadian most famous for having predicted a big storm in 1883, described a novel he was writing. As this is being written, many movie theaters are showing John Carter, based on the series of novels written by Edgar Rice Burroughs starting in 1911 and taking place on a fictional version of Mars. Twenty years earlier, Wiggins’s novel was called Jack Suehard; or, Life on Jupiter. It featured “what the people of Jupiter call a ‘stanlon,’ a mirror twenty feet square, which is in every house and a conspicuous object in every street of their cities,” Wiggins told The New York Times (headlines above).  A stanlon provided instantaneous image transmission. “It is the Jovian newspaper, theatre, pulpit, and tribune.” 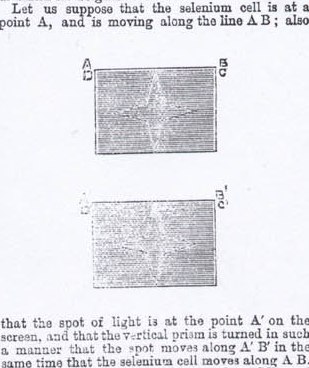 Although we might never know whether “Electrician” had anything on which to base the 1877 report, Robida and Wiggins were dealing with fiction. Others, however, were working on actual theatrical TV at about the same time. Consider, for example, William Lucas of London.

On April 21, 1882, English Mechanic and World of Science carried his detailed description of his version of a “telectroscope,” a scanned video-projection system, on pages 151-2. It was probably the first proposal for a video projector. 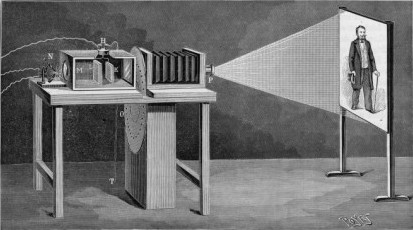 Then there was Frantz Dussaud, a Swiss physicist previously best known for his work in sensory-impairment aids. He called his system a “téléoscope.” It used an electric arc light source for a large, bright picture.

At left is a portion of an illustration of it that appeared in the Scientific American Supplement on January 2, 1898. You can read the whole article here: http://histv2.free.fr/19/dussaud.htm.

Take the artist’s illustration above with a grain of salt. As best we currently know, the first video image of a recognizable human face didn’t appear until 1925, and that was in a system designed for individual viewing. But, at about the same time, actual, working, theatrical-television systems were also introduced. 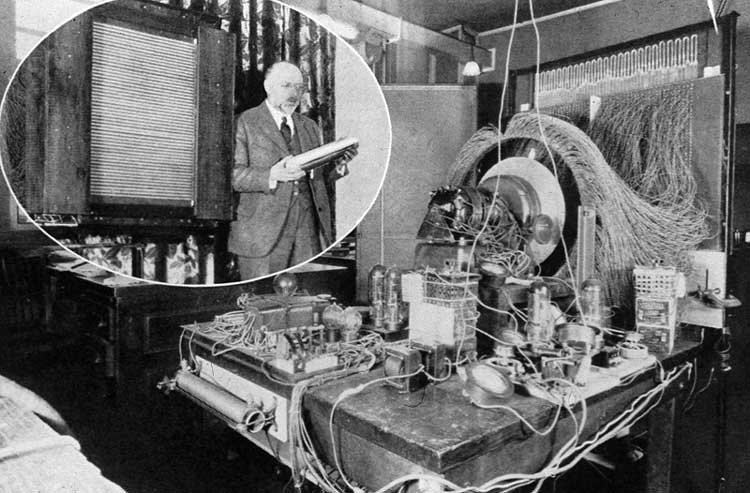 Artists’ illustrations in this post will now change to photographs. In the photos above, shot in a Bell Telephone Laboratories auditorium in 1927, at top left is Herbert Ives standing next to a direct-view video display. The larger photograph shows what was behind the screen, allowing it to work.

In 1930, there were at least five different theatrical-television systems demonstrated — in actual theaters. The first was on January 16 at the RKO-Proctor 58th Street Theater in New York. It was an RCA system that produced a ten-foot-wide image. In April, Ulises Sanabria conducted his first demo in Chicago. On May 22, it was General Electric in Schenectady, New York (above).  On July 28, John Logie Baird presented his version in London. And, on July 30, RCA showed a different system in Schenectady. 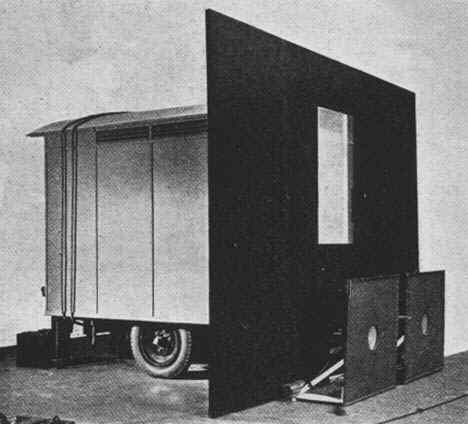 The GE, RCA, and Sanabria (Western Television) systems all used projection through mechanical scanning disks. The Baird system (right), like that of Bell Labs, was direct-view, but with thousands of tiny light bulbs instead of a long, folded tube with multiple electrodes.

Baird’s idea of using a matrix of light bulbs as a television display dates back at least to his first patent application, in 1923, which pre-dates the Bell Labs demo. But might he have been influenced by anything else? It’s certainly possible.

There was a completely different path to large-screen moving images, that of outdoor advertising. In 1891, the first flashing electric “spectacular,” a sign for Manhattan Beach, was erected in New York (medical students were hired to throw the knife switch to create the flashing). 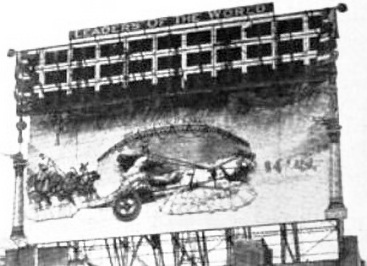 The 50-foot-high Heatherbloom Petticoats sign erected in Times Square in 1905 introduced animation, by flashing different bulbs in sequence.  It was followed by the Rice Electric Display Company’s Chariot Race.  After smaller versions were installed in Dayton (in 1908) and Detroit, a big one (left) was installed atop the Normandie Hotel in Manhattan.  It used 20,000 bulbs of different colors and a 600-horsepower engine and showed a 30-second sequence at the equivalent of 42 frames per second.  It also had no direct connection to any advertiser. 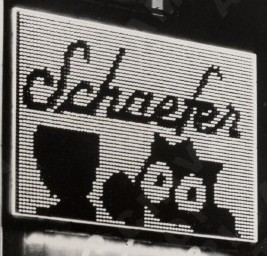 Instead, companies could buy time on a three-row message board atop the chariot race.  It was so popular that a special police unit was assigned to control crowds who watched it over and over.

The “Leaders of the World” chariot-race sign could show only one moving-image sequence, but the Luminograph, patented in 1913, projected film onto photocells, which controlled relays, which controlled light bulbs. The later Epok substituted tubes for the relays.

An American version (shown in Times Square at right, window at top indicates size) even let live dancers to perform in front of the photo-cells. By 1937, the Wondersign added color. 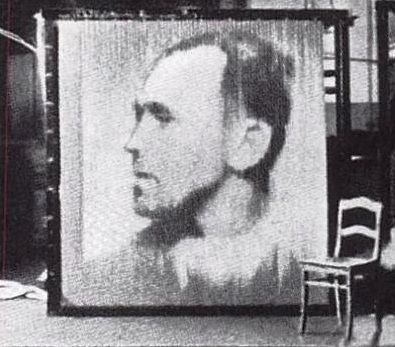 Meanwhile, back indoors, video projection had embraced a broad range of technologies. In electromechanical television, there were not only scanning disks but also scanning drums (Scophony) and scanning screws (mirror spirals). In electronic television, there were ultra-high-brightness cathode-ray tubes. Direct-view (non-projection) systems improved to the point where this actual screen photo could be shot of a Telefunken matrix (shown at left) in 1935. Color projection was shown by 1938. An then there were some really unusual systems. 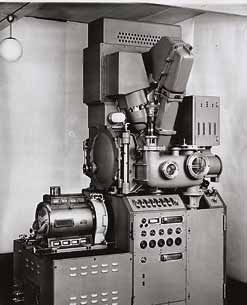 In 1931, radio pioneer Lee de Forest filed a patent for a means of etching video images onto motion-picture film. By 1933, a different version evolved into the Fernseh “intermediate film” system.

A continuous loop of film would be exposed, processed, projected, cleaned of the emulsion, re-coated with fresh emulsion, and re-exposed. The time delay between exposure and projection was considered short enough that it could be used for live events.

Then, before the end of the decade, Fritz Fischer conceived of an extraordinary system. It involved a vacuum pump, an oil bath, a scanned cathode ray, and a strange light-control system called Schlieren optics. It eventually became known as the Eidophor (early version shown at right).

As World War II began, it wasn’t clear whether television would ultimately be more successful in homes or in theaters. Then the war ended, and the results soon came in. U.S. movie theaters sold an average of 90 million admissions per week in every year from 1945 through 1948; by 1950, it was just 60 million, by 1958 40 million, by 1967 under 18 million, less than 20% of the number of two decades earlier (while the country’s population grew 38%). 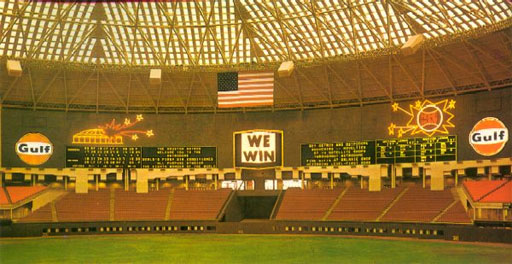 Hollywood’s movie studios tried getting involved in both home and theatrical TV, but another large-screen video outlet appeared in 1965 in the Houston Astrodome, an electronic scoreboard (created by Fair-Play) with central video-matrix screen (shown above). In 1972, Stewart-Warner installed the first (black-&-white, light-bulb-based) instant-replay video scoreboard at Arrowhead Stadium in Kansas City, and the following year four high-brightness color Eidophor projectors provided video viewing on the “Telescreen” at the indoor Capital Centre in Landover, Maryland (shown at left).

Five years later, in 1978, Mitsubishi started a program to see if they could combine the color, video characteristics of the Telescreen with the outdoor brightness of a scoreboard. Perhaps strangely, the technology they chose was the color picture tube, with one important difference. Instead of getting all three colors and the complete image on one tube, they came up with a tube for each color of each picture element (shown at right). A “flood beam” hit the whole phosphor faceplate of each tube at once.

The first installation of what Mitsubishi called Diamond Vision was at Dodger Stadium in 1980 (shown at left). It was followed by Astrovision (Panasonic), Starvision (EEV), Super Color Vision (Toshiba), JumboTron (Sony), and a system from Omega’s sports timing group, all with variations on the tube idea. And then there was another breakthrough technology.

In 1968, Jim Tietjen at RCA Laboratories suggested an LED-based color TV, and Calvin Diller applied for a U.S. patent on one, but there was a problem: blue LEDs didn’t yet exist. By 1971, the first ones appeared in a lab, but they were exceptionally dim. Even when Cree Research released its commercial blue LEDs in 1989, they were still dim. Nichia Chemical introduced an outdoor-brightness blue LED developed by Shuji Nakamura in 1993. For “pioneering development of emissive technology for large outdoor video screens,” both Mitsubishi and Nakamura received Emmy awards this year. What goes into those large video screens is the subject of my next post: http://www.schubincafe.com/2012/03/25/the-alternatives/ 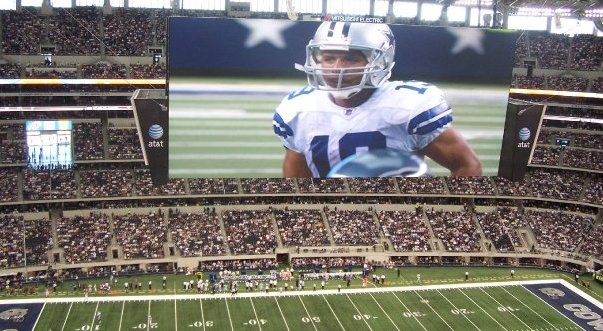 The rest, as they say, is history, except for one thing that hasn’t quite happened yet. When they were installed, the 175-foot-diagonal LED video screens (one shown above in a photo by Big Cowboy Kev http://en.wikipedia.org/wiki/File:Cowboysstadiumvideoscreen2009.jpg) at Cowboys Stadium in Texas were the world’s largest. On April 28 of this year, almost exactly 135 years after “Electrician” suggested it, they will carry The Dallas Opera’s The Magic Flute, live, as it’s being performed in the Winspear Opera House.