Did you think television was introduced at the New York World’s Fair in 1939? The BBC telecast the opera Carmen in 1934, and the first television program with an original script was an operetta broadcast in Chicago in 1931.

Did you think the idea of television came from Philo Farnsworth in 1927? Fifty years earlier, in 1877, the New York newspaper The Sun carried a proposal for transmitting live opera (both video images and sound) to theaters around the world (like the current series The Metropolitan Opera: Live in HD). 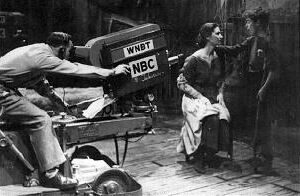 Did you think PBS has always been the home of opera on television? CBS commissioned 14 operas for television, NBC 13. In addition to commissioning its own television operas, ABC also developed new technology for televising opera from the stage, involving cameras using dry ice and infra-red lamps.

Join multiple-Emmy-award-winning engineer and historian Mark Schubin for a National Opera Week illustrated talk about the extraordinary combined history (and possible futures) of opera and television. Did you know that for half a century starting in 1885 people went to opera houses to watch live remote baseball games? Did you know that laboratories around the world have been discussing sub-atomic particles in the service of televised opera?

Watch and be amazed!