Live From MLB All-Star: Sound for the Home Run Derby Touches All the Bases — and Then Some

Following tradition, the Home Run Derby will be seen on ESPN tonight, a day before the midseason MLB All-Star Game Tuesday, which will be broadcast on Fox Sports. The two events share some of the audio infrastructure assembled at PetCo Field in San Diego, and CP Communications is providing all the RF coverage for the two days’ events. But each will have some wrinkles of its own. 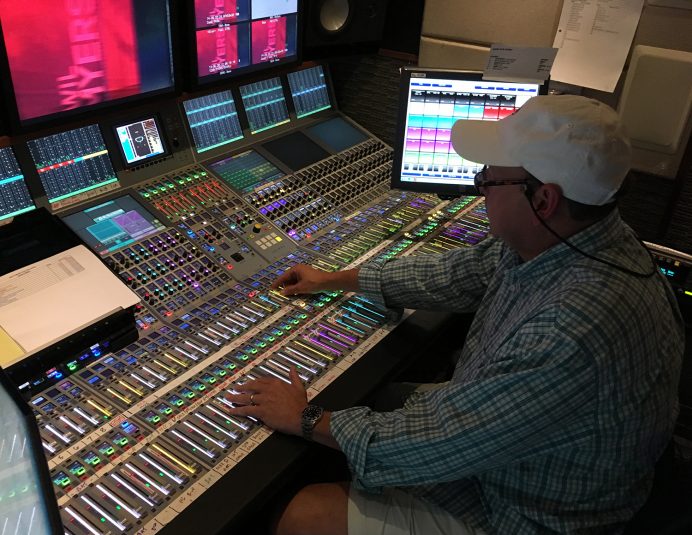 ESPN A1 Scott Pray during the Home Run Derby

ESPN, working out of NEP EN-1 for the Home Run Derby, will have the luxury of lavs on every hitter — using Sennheiser MKE2 microphones with Lectrosonics Venue series transmitters — with that audio available, on a short delay, in real time. According to A1 Scott Pray, four manned parabolic mics will be roaming the outfield to capture the sound of the catches. In addition, two robocams placed low to the ground along the first- and third-base lines will be fitted with shotgun mics to catch the bat cracks and other home-plate sounds. In addition, umpires and catchers will wear either Quantum QX5 or Sennheiser SK250 lavalier microphones, with the latter generally nestled in the umps’ and catchers’ protective padding.

“It’s not a normal game,” he points out, “so we have a lot more microphones on the field than usual, and we’ll be able to use any combination of these sources. It gives you tremendous coverage of the home-plate area.”

As much coverage as there will be for the batting area, the number of sources requires a more complex mix strategy. That’s compounded by the fact that, since catchers will change often, not all of them will be wired, constantly changing the balance in the home-plate area. Pray says submixer Jonathan Freed will be staying on top of that.

“He does a great job of finding the best combination of sources for each moment,” he says, adding, “We really have far more sources than we’d have on a typical MLB game, and that’s where you have to be aware. If you have too many microphones open at the same time, you can get slap-back,” a reference to the slight time-delay differences between microphones at different distances from the ball hitting the bat that can result in flam-like echoes. It’s an effect that’s great for snare drums but not for baseball.

“We get a lot to work with,” Pray concludes, “and that makes for an interesting event in terms of the sound.”