The league, ESPN look to innovate with alternative live-game experiences

It’s July in Las Vegas, and that means the NBA Summer League is back in action at Thomas & Mack Center — and, with it, the league’s annual “Innovation Lab” effort. Although the Summer League has always been a hotbed of technological innovation, the league and ESPN are taking it to a whole new level this year, testing out several alternative broadcast formats in an effort to better engage with fans and meet their rapidly changing media-consumption habits. 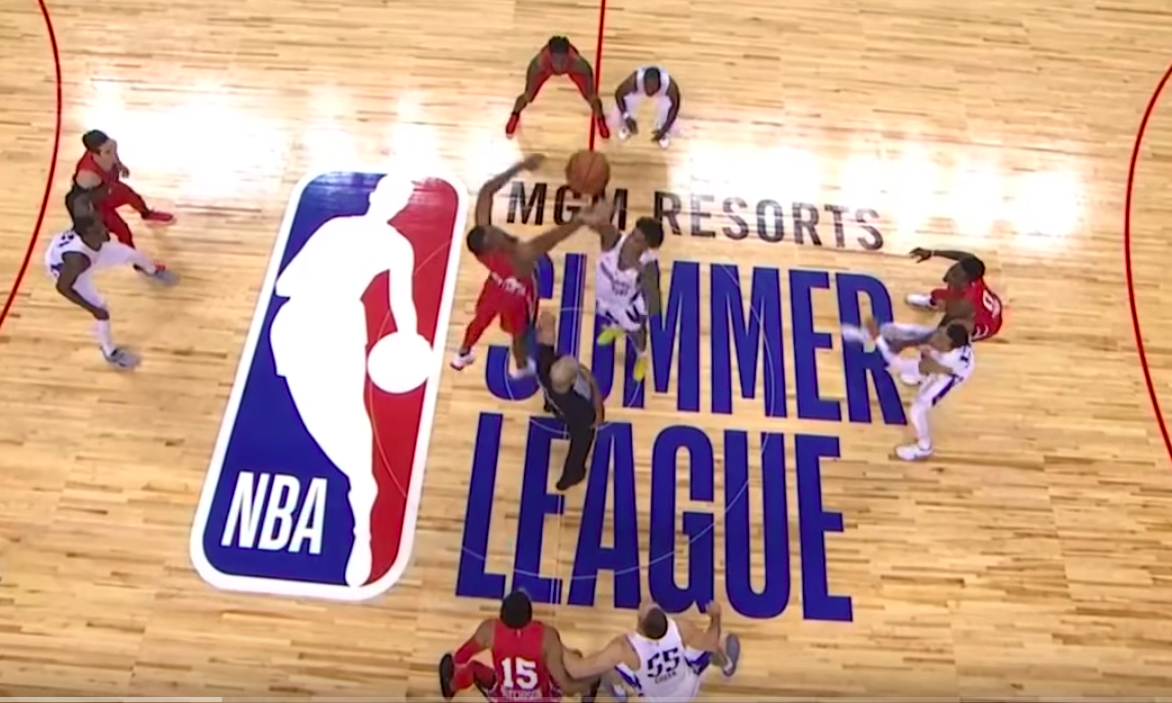 Over the past week, the NBA and ESPN have teamed up to live-stream several different feeds on ESPN3: SkyCam View, Summer League Live, Dueling Analysts, and Hometown Call. Most interesting, the league is also producing two full games in 9×16 “Vertical View”; intended to reach mobile-first viewers watching on their phones, they will be live-streamed internationally. The league, which has rolled out Mobile TV Group’s 28HDX production unit for its live productions in Vegas, is also creating content for the NBA AR app and NBA VR platform.

“For several years, [Summer League] was more of a basketball incubator; now it’s become a content and technology incubator,” says NBA Director, Broadcasting, Paul Benedict. “We want everyone to come in and be willing to try different things, and I think we all come in here with that mentality. And, since these are exhibition games, we have a lot more freedom to experiment. It’s really the perfect storm. It’s always been an innovation center for us, but I think, this year, we took it to a whole new level, and I imagine we’re going to continue along this path for years to come.”

CLICK HERE for Part 2 of the NBA Summer League Spotlight, focused on the league’s testing of alternative broadcast formats.

NBA Vertical View: Thinking Outside the 16×9 Box for Mobile Viewers

More fans than ever are watching live NBA games on their mobile phones, and, according to NBA data, viewers are increasingly watching this content vertically rather than flipping their phones horizontally. In addition, Snapchat has long championed the 9×16 vertical video frame, and Instagram just launched a long-form vertical-video section dubbed IGTV. 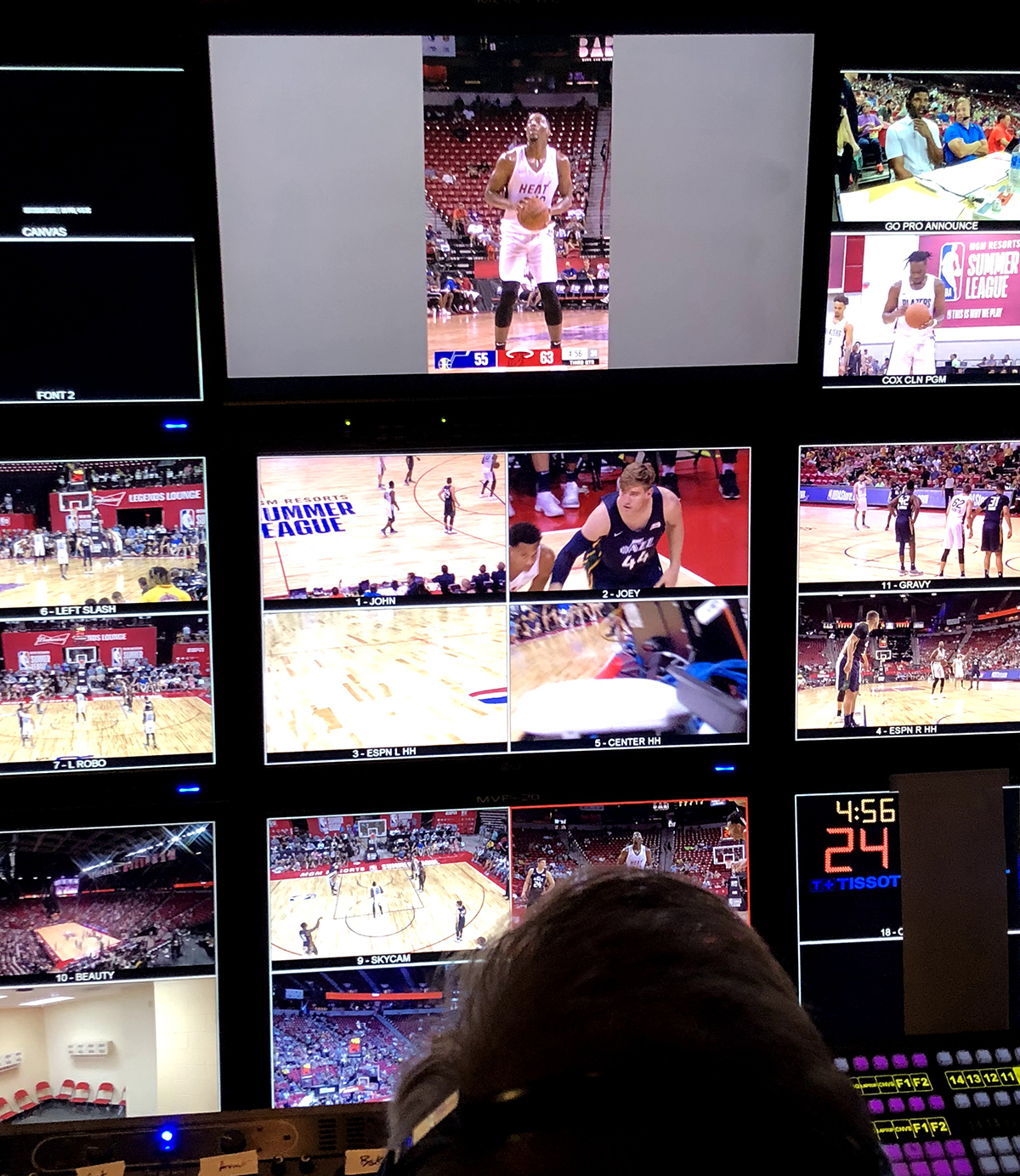 With all that in mind, the NBA embarked on a grand experiment: producing two games specifically for vertical consumption on mobile. On July 10, the league produced the Jazz vs. Heat and Kings vs. Grizzlies matchups in full 9×16 portrait view rather than traditional 16×9 and delivered them to Tencent in China and NBA League Pass International.

“If you watch an NBA game right now on our League Pass app in the Vertical View, you’re essentially filling up only about 40% of your screen,” says Benedict. “So we thought, What if we just shot a game in 9×16 instead of the traditional 16×9? Let’s cover up viewfinders [on the cameras], frame it with bars [on the monitors] in the truck, and just shoot an entire game like that.”

Rather than just shooting the game action tighter (similar to NBA Mobile View on NBA League Pass), the production rarely used the center-court game camera and, instead, leveraged SkyCam, courtside handhelds, above-the-rim robos, and slash positions in an effort to fill the 9×16 frame with action. Camera viewfinders were recalibrated for 9×16 shooting, and director Jeff Curtin (who is director of broadcasting for the Portland Trailblazers) was provided with safety bars on the truck monitors. In addition, ESPN worked with Vizrt to redesign the graphics package and scorebug, which features the clock and score centered at the bottom of the basket.

“Everything is focused on keeping the ball in the center of the frame, so the majority of the game is covered with handhelds, with robos, and with the SkyCam, which all really lend themselves to vertical,” says NBA EVP, Media Operation and Technology, Steve Hellmuth. “We’re trying to truly cover the game in more of an up-and-down [format], so, when we go into replay, we’ll stack a couple of replays and show them at the same time in the vertical format.

The line cut left the truck as HD-SDI and was sent to the NBA’s facility in Secaucus, NJ, where it was cropped and distributed to Tencent and NBA League Pass International.

“Obviously, this is important because our data show that many fans have no intention of ever flipping their phone horizontally to watch a game,” says Hellmuth. “Obviously, this also provides a ton of material for all of our social-media channels besides just the live game. It’s strictly an experiment right now, but it’s something we’re looking at very carefully, and our partners seem very interested.”

ESPN has deployed SkyCam for the duration of its coverage (July 6-17), but the aerial system took on an even bigger role on Wednesday, when ESPN3 and NBA League Pass International live-streamed a SkyCam View broadcast option for back-to-back games. Building on the efforts of NBC Sports’ NFL Thursday Night Football coverage last year, the alternative production used the SkyCam, rather than the traditional center-court position, as the main game camera. The SkyCam View caters to NBA fans groomed with the infamous “auto flip” reverse perspective in NBA 2K videogames.

“Our goal was to see what we could do with it in an open environment like Summer League,” says Benedict. “We know that we have full range over the entire floor, with a little bit lower depths than we normally would. We are trying to replicate that overhead view with a ‘look-and-spin’ action that you see in NBA 2K. Along with ESPN, we’re both really excited about it.”

Summer League Live: Bringing Viewers Inside the Arena
With Summer League Live, the NBA and ESPN aim to deliver an interactive, social-media–driven telecast that brings alive the Summer League in-arena experience and engages fans in ways that allow them to affect the show. The format debuted on ESPN3 and NBA League Pass International on Friday (Suns vs. Mavericks) and Saturday (Lakers vs. Sixers).

“On Friday, we focused on bringing the [in-arena] experience to life, because Summer League is a really cool event and people don’t appreciate it until they get here and experience it for themselves,” says Benedict. “So we brought our reporter Rob Knight up, and he brought it alive through Pop Shot [arcade-game] activation, getting players signing autographs, and showing how it’s a who’s who of who’s at the arena. We tried to bring that alive.

“Then, on Saturday,” he continues, “it was more about social and really sparking up conversation. We’re really making an effort to bridge social, digital, and linear and trying to get them all to play off one another. We did a lot of viewer prompts that allowed them to choose some of the content that would be coming up, and that dictated the direction of the broadcast. And we did a lots of cool Instagram interactions. We were really happy with it overall.”

‘Dueling Analysts’ Format Adds New Dynamic
On Monday, ESPN3 and NBA League Pass International live-streamed a “Dueling Analysts” feed, an approach that gamified the broadcast by putting two analysts up against one another in fun and competitive fashion.

“The idea for Dueling Analysts idea was born out of [the question of] ‘How can we gamify a broadcast? How can we add another element to a game to keep viewers watching for longer? Not every Summer League game is going to have the most compelling action, so what’s another reason we can get fans to really stay tuned in and watch? We took two analysts who are very engaging and can occasionally be contentious and start fireworks and pitted them against each other.” 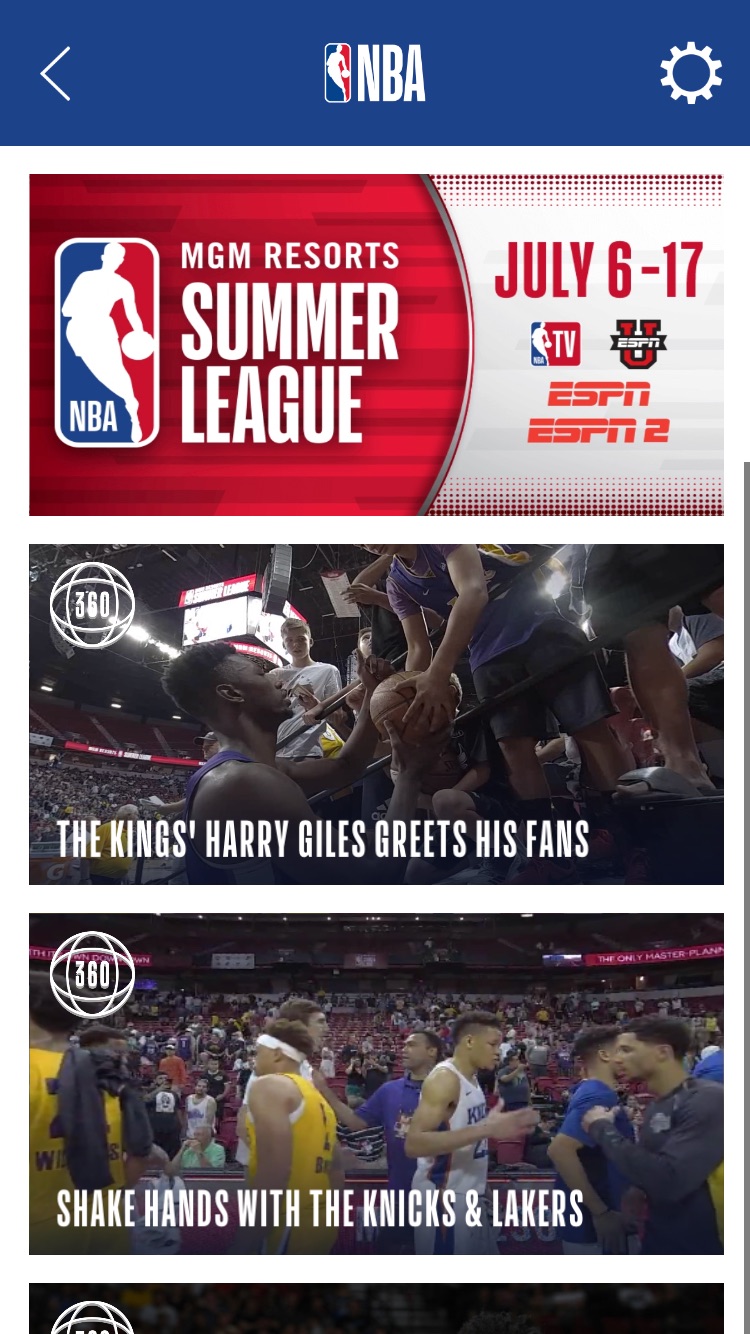 Fans Get To Hear Familiar Voices With ‘Hometown Call’
On Sunday and Monday, ESPN3 and NBA League Pass International also provided viewers with a “Hometown Call” featuring with their local announcers’ audio feed.

“One thing you lose when you get deeper in the Playoffs is, the games become exclusive [to national broadcasters]. If fans want the Hometown Call, their only option is just the audio [on radio],” says Benedict. “The big challenge is integrating the [hometown commentary] over the [telecast] and matching the graphics. The focus is really syncing those feeds up so there’s no delay for the fan at home.”

All About Immersion: AR and VR Return
After launching the NBA AR app for last year’s Playoffs and rolling out plenty of content throughout the Finals and the NBA Draft, the league is continuing the effort in Vegas. The league is creating both live and VOD AR content that allows fans to virtually go on the court and behind the scenes with various 360-degree executions on the NBA AR app.

“There are two camera sets here, and we’re looking to provide people with AR experiences in back of house, at courtside during warmups, and in the locker rooms,” says Hellmuth. “We’re just looking to give people an experience as if they were at Summer League. Coming off the great AR [content] during the Finals and at the Draft, we’re really excited about this. There’s no question people are investing in AR, and we believe it has a big future.”

The league and its partners are also producing new VR content at Summer League and testing out new tools for both content- and referee-development initiatives.