Fundraising and sponsorship paid for a majority of the price tag

As summer nears its conclusion over the next few weeks, student-athletes are returning to campus with a new season on their minds. If you’re a Colonial of Robert Morris University, a bright and shiny building in the form of the UPMC Events Center will be awaiting your arrival. The multimillionaire project concluded just in time for commencement ceremonies on May 10 and 11, but the student body is chomping at the bit for the first official women’s volleyball match in two and a half weeks.

“The UPMC Events Center is a beautiful facility and it’s pretty impressive,” says Becky Schoenecker, video coordinator, Robert Morris University. “It feels like a professional facility when you walk inside. Everything they could have thought of turned out to be incredible. The entire facility itself finished up at $50 million between the events center and our recreation center. Teams are inside and able to practice, so it’s ready for this upcoming year.” 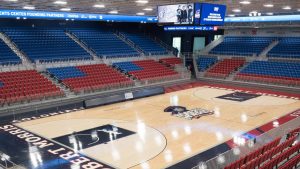 The 4,000-seat UPMC Events Center opened in May of 2019 for commencement ceremonies.

From Humble Beginnings: Living in the Sewall

Robert Morris University came a long way from the current 161,000 square foot, 4,000-seat arena. The John Jay Center (the home of women’s volleyball and men’s/women’s basketball from 1965 to 1984) only seated a whopping 1,000 spectators. The structure’s successor, the Charles L. Sewall Center (named for the university’s president from 1967 to 1989) was in service for over 30 years. Commonly known as “The Chuck”,  the site hosted the Northeast Conference basketball tournament four times in its history. The institution began demolishing the edifice in 2017.

Before breaking ground on UPMC in July of the same year, the crew did their research to gain a bit of influence.

“Early on, the team took some trips to other universities to see how things were built around there,” says Schoenecker. “Bowling Green State University was the biggest one.”

Since moving into their new digs, the athletics department has experienced quite a culture shock. One major aspect is an upgrade in digital signage, courtesy of Daktronics, that wasn’t present in the Sewall Center.

“It’s a night and day [difference]. Before in the Sewall Center, it was more like a high school gym. When it came to administrative staff, [the old venue] had offices with as many people as you can put inside,” says Schoenecker. “We used to only have Daktronics scorekeeping tables. Between last year to now, we went from just those boards to wraparound ribbon boards, a new centerhung, a circular display underneath the centerhung, and then you have two longboards on the sidewall. We’re adding another circular display on top [of the centerhung] for a sponsor.”

Alongside the new LED video displays, the space includes extensive area for athletic training and a full strength and conditioning room. 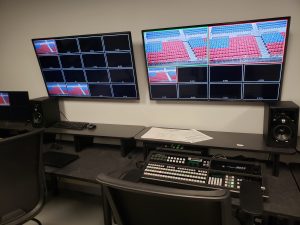 Along with Schoenecker, the tech-savvy mastermind that has been deeply involved with the project is Dylan McKenna, systems administrator, Robert Morris University. To enhance the new control room, McKenna and his staff teamed up with a company on the other side of Pennsylvania, Applied Video Technology and one that was more local in Pittsburgh, Horizon Information Systems.

“We have a Ross Video Carbonite Ultra production switcher that runs the centerhung and a NewTek TriCaster TC1 that is meant to run the web stream. A Ross Video NK-3G64 does our routing to both of those switchers,” he says. “For audio, it’s a QSC Q-SYS control system with Danley amps and cabinets in the main bowl and QSC ceiling mount speakers in the halls and concourse. A DiGiCo S21 is the main bowl mixer.”

With any new college arena, fiber connectivity is a massive undertaking. The project included single-mode fiber to multiple areas such as the main bowl, the main hard camera position, and the practice gym. AJA Video System’s FIDO converters are used to grab SDI from the cameras into the router.

Although the new control room only has a singular use at the moment, which will solely be used for games that occur within the venue walls, the university is striving towards making the space a production hub for the other teams on campus.

“As we stand right now, it’s just basketball and women’s volleyball, but the hope is to get it there. We have fiber running around the entire university, so it’s basically getting the adapters to get those feeds from the soccer field to our control room. It’s possible and that’s down the road with what we want to do,” says Schoenecker. “The TriCaster has eight inputs to help with our live stream and that was a thought for the long-run to eventually get to streaming the other sports around campus.”

Much like the athletic events that go on at other campus locations. the productions within the UPMC Events Center will most likely be run by the peers of those participating in the games.

“Before this facility, we used [students from] the Media Arts department and the Academic Media Center, which houses the online newspaper,” she says. “RMU TV is part of community access, so community access volunteers their production truck for us to do games. All of our football games are student-produced.” 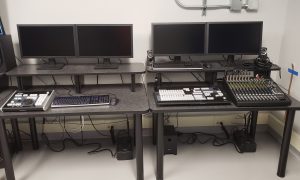 A NewTek TriCaster TC1 with eight inputs is setting up the future for campus-wide productions.

The students that do take part in these upcoming games will operate three hard cameras, a wireless camera, and a new PTZ camera that emanates from the bottom of the centerhung.

A Gathering Place for All: UPMC To Host More Than Sports
Robert Morris University has certainly found their new crown jewel on campus, and it’s one that comes with multiple purposes. Although the action on Peoples Court will take priority over a good chunk of the scheduling, every student can find something that piques their interest. Performances and concerts throughout the year include The Doobie Brothers on August 16, Sara Bareilles on November 15, and “Rudolph the Red-Nosed Reindeer: The Musical on November” 30. In addition, a 5,200 square foot conference center can bring outside organizations to the space as well.

As a former women’s soccer player from 2011-2014, Schoenecker has witnessed both the past and the potential future of the university. Through the many stages of evolution and growth, she feels immense pride for her alma mater and the people who made this transformation possible

“It’s the validation of a lot of hard work that people put into this facility,” she concludes. “This project was [mostly] paid for through fundraising and sponsorships, so to see their vision come to life and exceed expectations is incredible.”