Live From the US Open: Van Wagner Strings Together Cohesive Coverage of All 16 Courts

For two weeks every year, Corona Park lights up as it did 55 years ago during the 1964 World’s Fair. The US Open is a carnival all its own with interactive exhibits, various food options, clothing outlets, and multiple courts showcasing high-caliber tennis on one of the sport’s biggest stages. As the link connecting all spectators together, Van Wagner Sports and Entertainment (VWSE) Productions settled into their new control room within Louis Armstrong Stadium to man the in-venue videoboard show in Arthur Ashe Stadium as well as all of the videoboards installed throughout the grounds of the USTA Billie Jean King National Tennis Center. 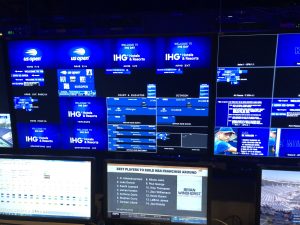 “We want all of these four courts [Ashe, Armstrong, the Grandstand, and Court 17] to have the same production level,” says Nathan McCoart, director, technical operations, VWSE Productions. “When you go from Ashe to 17, you’re getting a similar fan experience whether you have a grounds pass or an expensive ticket.”

Arthur Ashe Stadium has continued to evolve in the last couple of years. After the completion of a retractable roof in 2016, the USTA approved the installation of a new LED fascia display alongside the playing boundaries for this year’s tournament. With over 14 million pixels, the new videoboard is powered by eight dual-channel Ross XPression Tessera SE, two XPression Tessera Master Systems, and a Ross Ultrix 64×64 Router with Quadlink to 12G GearBoxing.

“All of [the graphics] are rendered in real-time in XPression without the edit team having to load up a day’s worth of assets at 16K,” says McCoart. “Whoever is playing in each match, the operator enters the match ID and all of their headshots, bios, and stats automatically update with a click of one button.”

In a tennis setting, the display remains stationary until the telecast hits a commercial break in between sets. At that time, VWSE incorporates video advertisements of the USTA sponsors as well as creative elements involving the players during the downtime between matches.

“The USTA really had the mindset of being more conservative in the first year. We [also] want to keep it tight and learn our workflow before expanding upon that” he says. “We wanted to make sure that their partners are getting the same amount of broadcast exposure as they would with a vinyl sign.”

With the Tessera foundation, McCoart is able to maneuver around the oddly-shaped spaces that come with a tennis court in Arthur Ashe Stadium.

“We have a couple of looks that are complete 360-degrees and others that are more broken up,” he says. “It depends on the look, but we can mix-and-match with a combination of both. With Ross XPression Tessera, we’re able to map out those awkward-sized screens into 1080 outputs and bring it back together in the process.”

Now that they have created a sturdy base, the production level can be risen to another tier with the first year under their belt.

“Moving forward, we’ll definitely see what other values adds we can have,” says McCoart. “For example, [during] takeovers that are situational to the match or after a point, there’s some type of stat graphic that appears and is even more coordinated with the broadcast.”

Ashe to Armstrong: A New Year Means a New Home

VWSE is not in their normal location inside the bowels of Arthur Ashe Stadium. With about two weeks from the start of the tournament, McCoart and his crew needed to act fast while setting up their new confines at the top of Louis Armstrong Stadium. It’s a precarious situation since most of the times, the control room is primed for production before they arrive onsite.

“We don’t typically come in and build an entire control room,” says Bob Becker, EVP, VWSE Productions. “In most cases, we’re fortunate to roll into facilities that already have one.”

VWSE is also relying on other control rooms next to the nucleus at Armstrong and further away at the Grandstand. With around 50 onsite staffers and two cameras (plus an RF in Ashe), each venue that requires a videoboard production is assigned a crew that is led by a venue producer from the entertainment side of the USTA. These individuals are able to solely focus on the logistics of the day’s events (queuing and scripting of each set break) in their designated stadium with their own production model.

Inside of the new headquarters, the hardware being used are relatively similar to those of years’ past, including a 12-channel EVS replay server, RTS intercom for in-house comms, and a 180×216 Miranda NVision Router. The Armstrong control room contains a Ross Carbonite Black switcher, while Grandstand has a Ross Carbonite Plus switcher.

For pre-packaged content, McCoart and company are also leveraging the creative services from the USTA.

“We work with the USTA video services department that does a lot of the feature work because they’re shooting footage with players during all of the other tournaments throughout the summer,” he says. “We pull a lot from them because they take that footage and cut it up for uses on social since our preproduction edit team [comprised of five employees in the broadcast center] has been focused on the graphics side.” 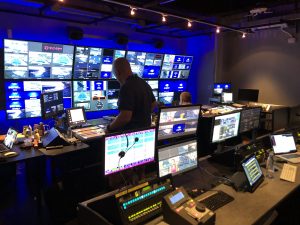 Knowledge Is Power: Whip-Around Coverage From All 16 Courts
Outside in the concourse, VWSE is responsible for keeping the avid tennis fan up to date on the latest results happening across the complex with the help of more than 30 total screens, Riedel Communications’ Bolero Wireless intercom system, and two feeds (clean and dirty) with ESPN.

While a good chunk of the team anchored in the main control room work on the Ashe videoboard show, one individual is weaving in and out of each match via a Ross Video production switcher with two 3MLE panels.

“That’s what I like to call the ‘RedZone’ style coverage. He’s watching all of the courts and zipping between each one to roll back and recap something,” says McCoart. “If there’s an awesome play or the end of a match that we missed live, we’ll have that for people that are sitting in the Food Village, the South Plaza, and so on.”

For ESPN’s digital presence, VWSE and the host broadcaster are sharing up to 60 feeds with each other. Wazee Digital, a partner of ESPN, is taking the content for archival purposes and flipping the material for the network’s social media platforms.

Despite the long two-week stretch and long days (and sometimes nights) spent in Flushing, NY, the VWSE team has continued to improve the production quality to immerse any fan that attends. Over the final five days of competition, the crew is now looking towards the transition over to IP in the coming years.

“It’s nothing that we’re not familiar with,” concludes McCoart. “It’s a bigger discussion due to the fact that the control room is filled with USTA hardware and rented hardware that comes in and also a more permanent infrastructure.”