The facility is home to the G-League’s College Park Skyhawks, WNBA’s Atlanta Dream

Atlanta has made major investments in its sports teams over the past six years. In 2014, construction began on the Falcons’ Mercedes-Benz Stadium and Braves’ then-Sun Trust Park. In 2017, State Farm Arena (built in 1999) was renovated. In November 2019, the city unveiled its newest sports site, Gateway Center Arena in the suburb of College Park, GA. It houses G-League’s College Park Skyhawks and, this spring, will become the new home of the WNBA’s Atlanta Dream. 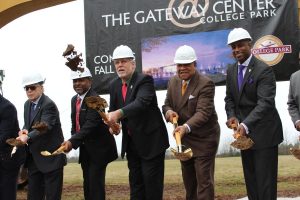 Dignitaries from the city of Atlanta and both basketball organizations break ground on the new structure.

For many new venues, a plot of land is put aside and dedicated to the new occupant. In this special case, the city of Atlanta wanted to check off two boxes at once without having to establish an entirely new location. Although Gateway Center Arena is distinctly the home of the Skyhawks and Dream, it will receive help from the Georgia International Convention Center (GICC) for one main reason: the venue is attached to the existing structure.

“The Georgia International Convention Center will also book events and other programming that complements what is booked in their facility,” says Mercedes Miller, executive director, GICC and Gateway Center Arena.

For citywide endeavors, the basketball venue can be used on specific off days as extra space for programming at the GICC.

In a new facility, the biggest attraction is often its LED videoboards. At Gateway Center Arena, Daktronics installed all the visual components that could be used throughout any game. 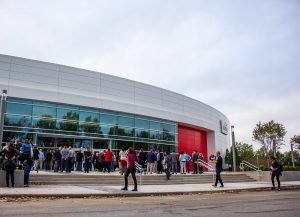 For in-game content, Gateway Center Arena relies on the creative teams of the Skyhawks and Dream. On game day, the staff at the arena is responsible for making sure the material is ready to go and they are comfortable within their working environment.

“Our clients will provide media content for the fan experience, says Yanous Barner, arena manager, Gateway Center Arena. “We will assist in getting their content matted to our system and ready for game day and other live events.”

After Barner and company get the teams settled, the production can be facilitated via a Daktronics control console in the control room. Audio is supplied through a Bose sound system, equalizer, and equipment provided by QSC.

To develop more ideas in the future, each professional organization will have its promotional teams present for experiential programming.

More Than Sports: Music, Esports Are on the Schedule
Gateway Center Arena will celebrate its first year of operation in the fall, and its calendar is filling up with events that extend beyond professional basketball.

“The Gateway Center Arena has also an agreement with the Fox Theatre to book shows and concerts at the venue,” notes Miller.

It’s just another example of how sports venues are becoming epicenters of activity all year round.

The Atlanta Dream will play its first home game of the 2020 WNBA season against the Chicago Sky on Saturday, May 16 at 7:00 p.m. ET.