Tina DiVilio had just moved across the country. It was a seasonably cold day in Philadelphia in early January and it was Tina’s first day as the new Senior Director, Event Presentation for the NHL’s Philadelphia Flyers.

The Flyers had made it to the second round of the Stanley Cup Playoffs the previous summer in the NHL Hub City of Toronto. But this was different. For the first time since the start of the COVID-19 pandemic, the team would play in its home arena of Wells Fargo Center.

Sure, there wouldn’t be any fans in attendance, but it was good to be home.

Before departing her previous job – a four-year stay with the San Jose Sharks on their game presentation team – a good friend back in the Bay Area, Laura Johnson (Director, Game Day Production & Live Events for the San Francisco 49ers), offered a bit of advice.

“Nothing will prepare you for a building with no fans,” recalls DiVilio.

The Flyers hosted their in-state rivals, the Pittsburgh Penguins, that Opening Night and, sure enough, Johnson was right.

“You feel like the ‘Chosen One’ just being in the building,” laughs DiVilio, who, prior to her time with the Sharks, also worked in game presentation for the Washington Wizards and Mystics for Monumental Sports & Entertainment and as a production assistant for the YES Network. “You’re almost entertaining yourselves. That’s the goal. You know if you are entertaining yourselves, you are doing a great job.”

Making the Transition To Limited Fans

Last summer, the Flyers had launched a new brand campaign – “Anytime, Anywhere” – to coincide with the team’s run in the playoffs up in Toronto. Since the messaging still felt apropos in light of the continued pandemic restrictions, the team brought it back in 2021 and looked to expound upon it. 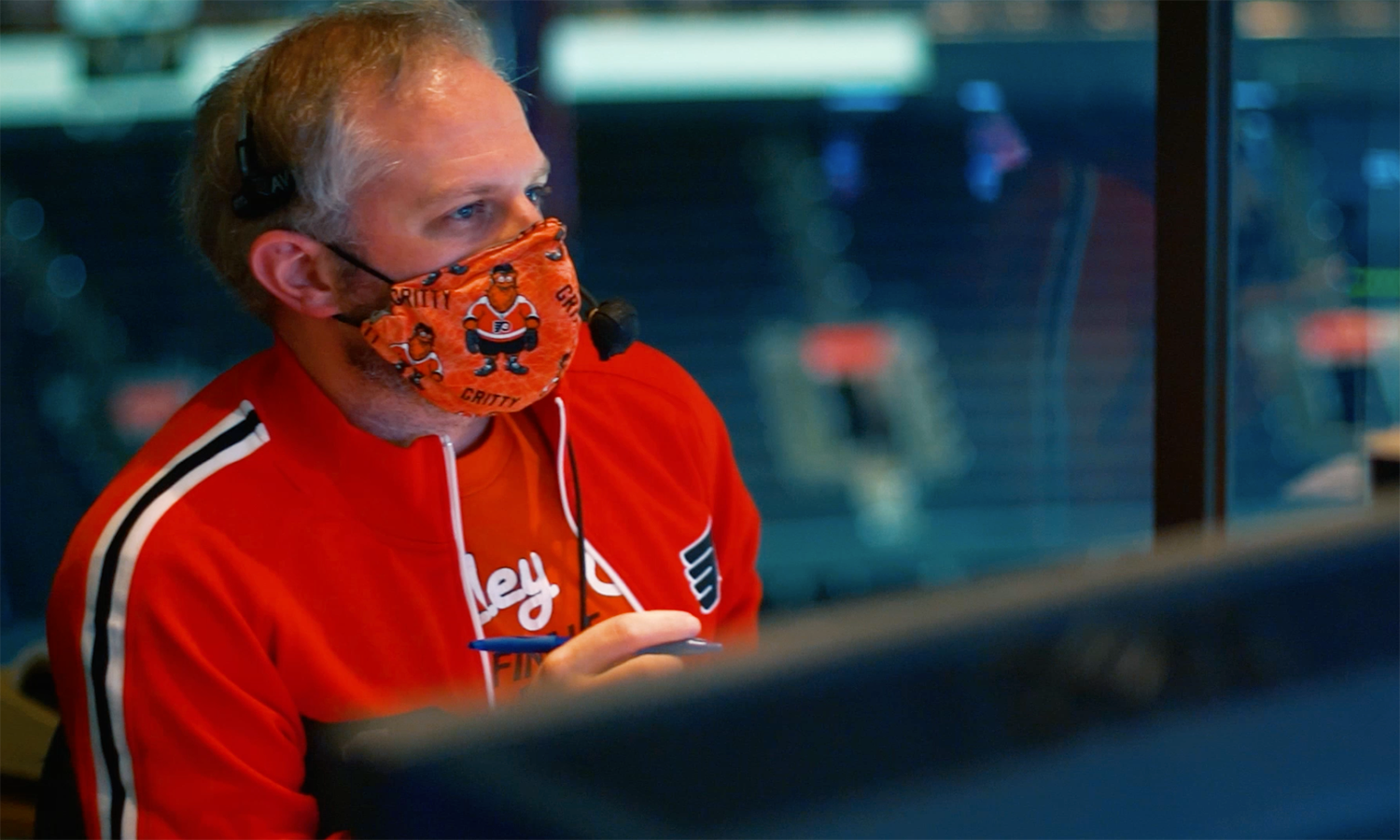 The in-venue show, which is headed up by senior producer and show caller Artie Halstead (a veteran of the building for 15+ years), spent the first two months of the season building out a script that was designed largely for the players on the ice. What music would they enjoy and how could their group build a home-ice advantage that the players could capitalize on?

While all that was going on, the team was already building a plan for what things would look like when fans, hopefully, did return at some point in the season. They initially planned for “much fewer” numbers but when the city announced it would allow for 15% capacity (or 3,100 spectators), it was a pleasant surprise. Select members of Flyers faithful returned on Sunday, March 7.

One of the most notable challenges? Pumping in artificial crowd sound to fill the mostly-empty building with some atmosphere. That task was taken on by producer and production assistant Justin Ott.

“Having fans, though,” she continued, “[Justin] had to change his whole mindset to ‘how do I supplement what the fans already sound like?’ That was one of our biggest challenges. It took a game or two but he hasn’t missed a beat. Whatever the fans sound like, he’s amplifying it and making it sound like 100% capacity. That machine is probably the most scrutinized machine in the industry at the moment. Everyone has an opinion about the crowd noise. With [Justin], we haven’t dealt with much negative feedback because he’s embraced it so well.” 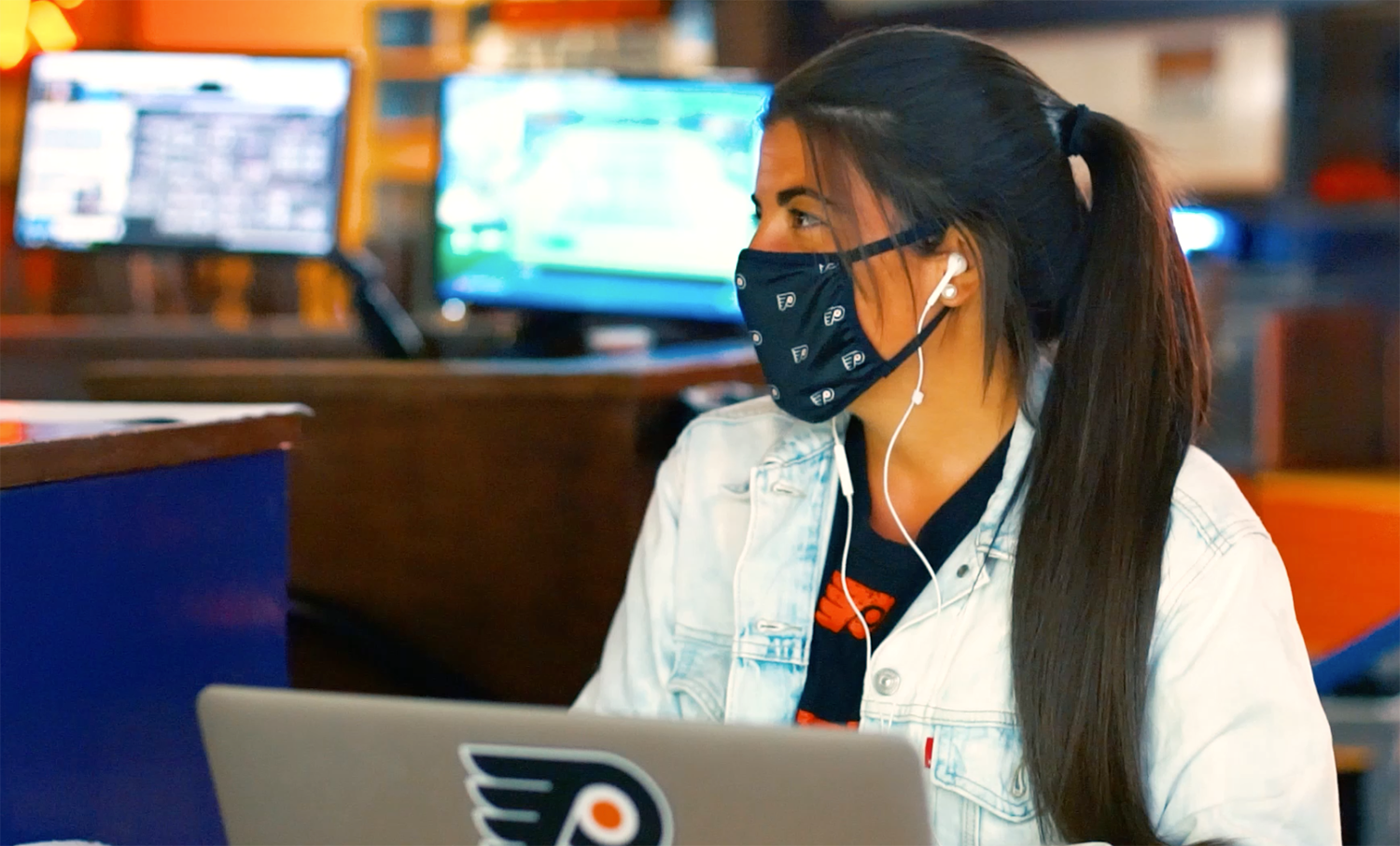 Game Presentation Manager Alexa Ikeler has played a key role in adjusting much of the execution of the show now that fans are back. Naturally, some of the new content includes building safety messaging, video that the team took on the challenge of trying to at least make fun. And what’s the easiest way to make something fun in Flyers Land these days? Get Gritty involved. The team mascot is featured in video and imagery throughout the game wearing a mask and maintaining social distancing.

Additionally, digital producer and in-arena host Andrea Helfrich came up with the idea of putting fans wearing masks on the big board; even couraging fans in the stands to show off their unique mask designs.

“We’re trying to make it cool to follow the rules,” laughs DiVilio.

For crew safety, Wells Fargo Center did add plexiglass barriers between positions in the control room and in the lighting booth (where three positions are separated). Some positions were also moved out of the control room onto press row to establish proper conditions. For example, Hunter McGinnis, a Ross Xpression specialist and programmer moved one of the graphics roles out there along with one of the EVS replay positions. Public address announcer Lou Nolan is also out on press row, sitting next to DiVilio on game days.

“Mask wearing is our biggest thing,” she says. “We are really on it and we are taking it very seriously. We haven’t had an issue yet.”

Prior to the pandemic, Wells Fargo Arena had just christened a new centerhung videoboard in the fall of 2019, and, boy, was it a doozy. Designed and built by ANC and TAIT, it’s a first-of-its-kind structure that’s described as the world’s first 4K kinetic centerhung videoboard. To put it more bluntly: it’s like a Transformer that shoots fire. 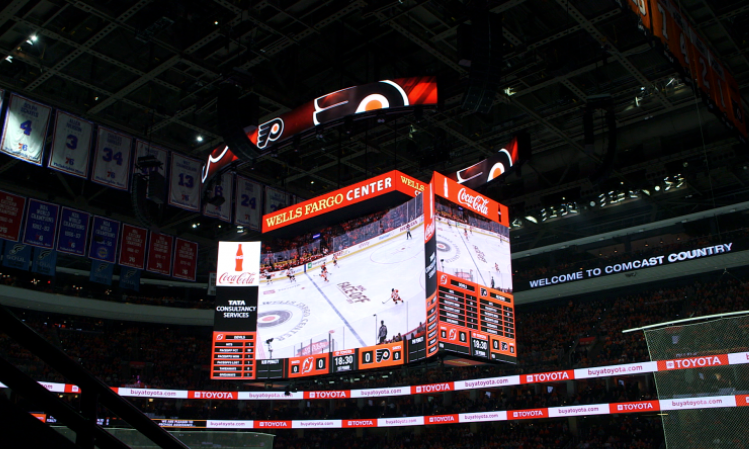 The board boasts more than 6,600 square feet of 4mm LED video space. The main hour glass-shaped scoreboard has two center screens and two horn-shaped screens. When fully closed (at 36 ft. long x 23 ft. wide), the center video screens compact together and live inside the two horn-shaped video screens. When fully open, it grows to 57 ft. long x 23 ft. wide and the two horn-shaped video screens expand to reveal the center screens. Perhaps its most notable feature is a massive ring that envelops the board and can smoothly rise and fall around the main screen. Oh, and yes, it can shoot flames from it.

While the Flyers’ game presentation team had gotten a good 5+ months with the new board prior to the NHL’s suspending of the 2019-2020 season in light of the COVID-19 pandemic, there was still a whole lot the group wanted to experiment with in their return to live events in the building at the start of 2021.

DiVilio has been impressed with the game pres team’s ability to try new things that maybe they wouldn’t have felt comfortable doing under normal circumstances. Lighting Director Larry Barnes (who is affectionately referred to as “Larry Lights”) has worked closely with DiVilio and Halstead to experiment with different looks for no fans, some fans, and what might still work when the team returns to hosting full capacity some day.

“This is the year to test things,” DiVilio says. “Let’s see if it works or not. Let’s see if the fans are into it. These are our die-hard fans that are coming to the games right now: season ticket holders, the ones that have been here from the start. They are the ones with the accounts being asked to come to these games and they will let us know if they don’t like what we’re doing. So far, so good!”

It’s that willingness and freedom to try new things that DiVilio says is her biggest takeaway from this entire experience and is something she plans on carrying with her when the Wells Fargo Center is packed with 19,000 screaming fans again.

That spirit actually birthed one of the most popular new pieces of videoboard content that the team has rolled out this year: a Flyers logo designed to look like the famous DVD logo screensaver. An admittedly super simple concept, but one that DiVilio says the fans go so crazy for that they were able to turn it into a noise meter to get the building hyped up at critical breaks in the action. 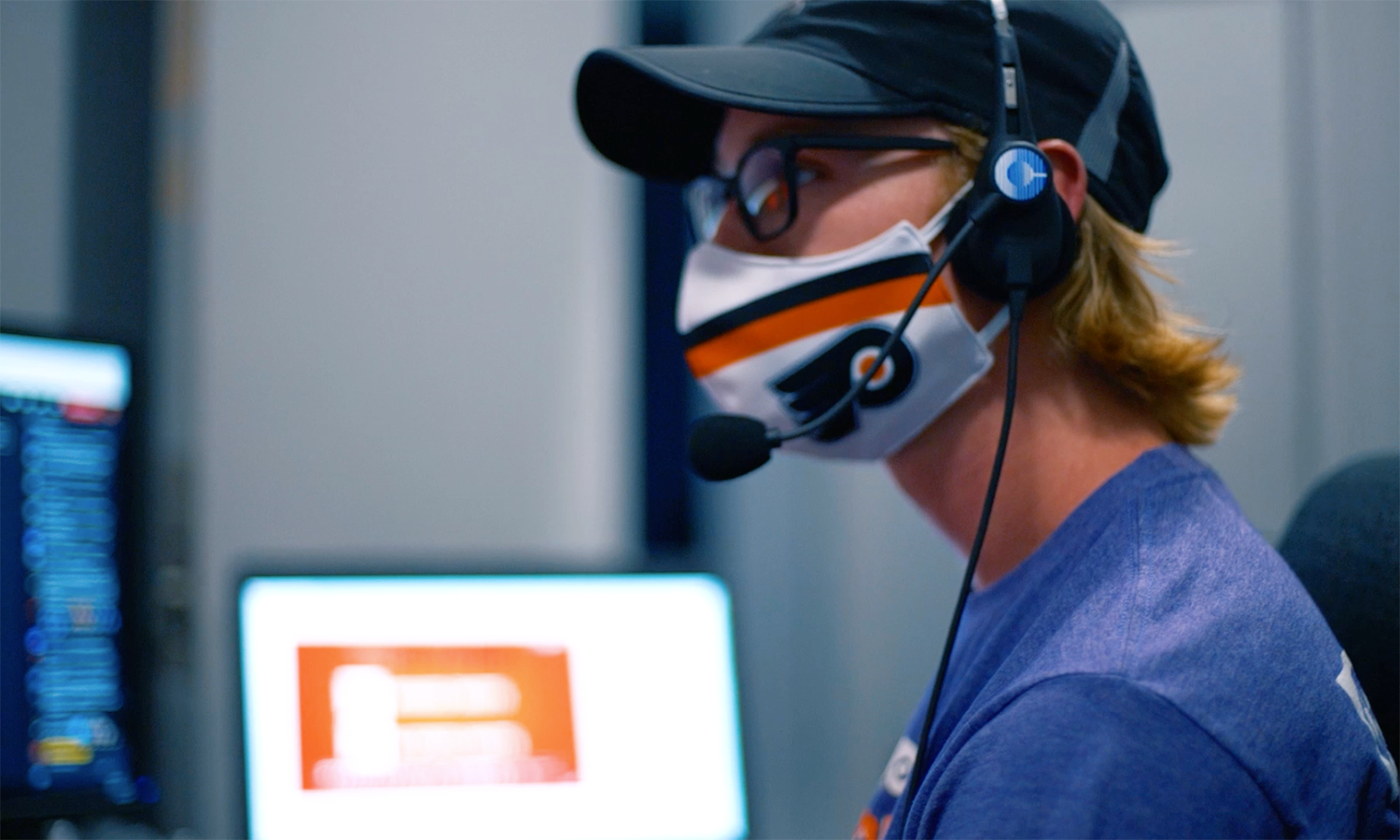 “Don’t be afraid to take a chance,” she says. “You don’t know if something is going work unless you try it. What’s the worst that can happen? They don’t like it and you learn, improve, analyze, make it work or move on to the next idea.”

“There’s new generations of fans coming into this building. There’s old generations of fans coming into this building,” she adds. “You want people leaving the building having had a great time and feeling like they got their money’s worth win, lose, or draw. It’s our job to provide that entertainment experience and the home-ice advantage at the same time. I’m really proud of this team trying things that may have been daunting in front of a full building.”

The Flyers are next back at Wells Fargo Center on Saturday for a 2 p.m. ET puck drop versus the Boston Bruins. They are right back at it on Sunday with another matinee (2 p.m. ET) hosting the Buffalo Sabres.