BeckTV was tapped as the project’s systems integrator

One of the more decorated clubs in Major League Soccer, the Columbus Crew closed out their last full season at Historic Crew Stadium in 2020 with an MLS Cup celebration. Fast forward to this past weekend, and the organization welcomed supporters to the new Lower.com Field for their second home match since its opening on July 3. As the third of three soccer-specific that were slated to open this year, the building is suited for one of the founding members of the league.

“This stadium is a huge accomplishment for the fans, the city, and our staff,” says Kyle Millen, director, scoreboard operations, Haslam Sports Group. “Our game day staff was in awe the first time they came because they now have a state-of-the-art control room with all the resources they need to put on the show that we want.” 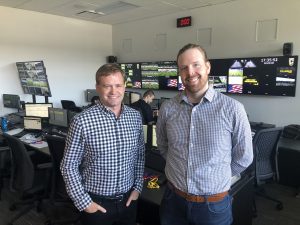 Millen and Shear are at the helm of productions in the new control room.

When the club broke ground on their new $314 million home in Oct. 2019, the franchise were on the hunt for a reliable group of partners. Assigned to the hefty responsibility of putting together the brick-and-mortar structure and the technological backbone of the control room, the club tapped the services of WJHW and BeckTV. On the tech side, Beck TV had lengthy discussions with Millen and his colleagues to develop a strategy that would accomplish the production goals of the crew.

“We were involved from Day 1, so we were able to say what we wanted the show to have and how we wanted the atmosphere to be,” he says. “Then, we reverse engineered [our plan] to make sure we included everything into the project.”

On any of these large-scale projects, there could be a possibility of not being on the same page as the systems integrator, but in this case, BeckTV had a lot of familiarity with the production personnel at the Crew when they were brought onto the project last spring. As an added plus, the company has history with the club’s ownership, Haslam Sports Group, after revamping the efforts of the Cleveland Browns at FirstEnergy Stadium in 2014.

“I’ve known Kyle throughout my entire career, and Haslam Sports Group likes to push the envelope on their show,” says Brock Raum, project engineer, BeckTV. “This is one of the best rooms in the MLS and it’s ran by one of the best crews in the MLS. When you put those two things together, that’s what makes jobs like this a lot of fun.”

A rack room is situated right next to the control room.

With a sound relationship with the systems integrator, Millen and the club moved forward on bringing other key players into the fold. To differentiate themselves from the other 26 organizations and take their content to the next level, the team established a full-time producer position that would be dedicated to rethinking their videoboard material. At the end of their search, Scoreboard Operations Producer Erik Shear was the chosen individual.

“We wanted someone who could really own and manage the show going on in this building,” adds Millen. “We were able to bring Erik on board, and he’s been able to not only produce the show, but also build up our content.”

Lower.com Field has a handful of notable production features that will capture the attention of both casual and avid supporters. Located above the main concourse, the brand-new space is a drastic upgrade from the team’s former digs. In terms of the physical layout of the room, the team is currently working in a more streamlined environment without many obstacles.

“Our server used to be in the middle of the old control room, so we’d try to have a production meeting, but we’d have to talk over the loud noise,” says Shear. “This new control room gives us ample space to operate, so we all have an individual station. Going from a cramped space at the old stadium to here is very refreshing, but it also allows people to get their job done efficiently.”

In addition, the team is now working with some of the latest in production technology. Similar to Austin FC’s Q2 Stadium, Ross Video has a significant presence in Columbus, including a Carbonite Ultra Black 2 ME production switcher with a TouchDrive TD2S Panel, OpenGear OGX for signal processing, an Ultrix FR5 router, Dashboard control system, Mira+ for replay and an XPression Studio graphics package.

“It’s a full 1080p system that’s really driven by a lot of Ross Video technology,” adds Raum. “When we ordered and installed the new TouchDrive panel system, it was one of the first ones rolling off the line, so it was pretty exciting for us to integrate some new equipment that hadn’t been out there yet.”

The control room is configured with other household names around the industry, including two Blackmagic Design Hyderdeck Studio Minis, a Yamaha audio mixer, and multiple converters from AJA. Outside of the control room, the action is captured via four wired Sony HXC-FB80SN cameras with Canon CJ45ex13.6B lenses and a wireless handheld Sony HXC-FB80SN with a Canon CJ45ex13.6B lens.

Down below, Daktronics LED displays are lighting up the pitch during nighttime matches with 8,700 total sq. ft. of LED real estate. The two main videoboards will both have a 13 HD pixel layout. Adjacent to the league’s second largest supporters’ section, the Crew’s “Nordecke,” a smaller 25-ft. high by 44.5-ft. wide will illuminate from the northeast corner. Directly opposite, a much longer screen will be positioned in the southeast at 25-ft. high by 108-ft. wide. Other LED structures include two ribbon boards (2.5-ft. high by 408-ft. wide on the east and 2.5-ft. high by 270-ft. wide on the west) at 15 HD pixel layouts, a perimeter display at 3-ft. high by 942.5 ft. long and 10mm pixel spacing, and a video board on the venue’s exterior at 14.5-ft. high by 24-ft. wide. In addition, the club is leveraging Daktronics’ Show Control solution. 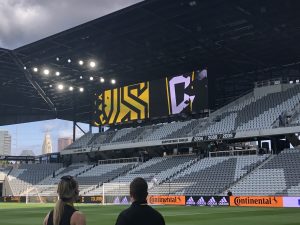 A view of the one of the two videoboards from the pitch.

As for the stadium’s audio capabilities, the club called on their audio integrator, New Era Technology, who worked with ATK Audiotek to pack a powerful punch. Through four Powersoft subwoofers positioned at each corner of the pitch and a pair of Roland SPD-ONE drum pads up in the control room, an audio technician is supplementing in-venue crowd sound with an additional bassline of sound for an over-encompassing sound profile.

“We’re using a number of triggers to enhance our audio experience in the lower bowl,” continues Millen. “We’ve gotten a lot of great feedback from fans.”

When you combine the technological arsenal in the control room and the new LED videoboards surrounding the pitch, it’s a pairing that can create a buzz around the building every single night. From the perspective of a neutral observer, it’s exhilarating to see the outcome of each show, but from someone who has worked alongside Millen and Shear during the early stages of the process, Raum acknowledges the limitless potential of the crew.

“Everything that surrounds [Lower.com Field] brings a competitive advantage on game day,” he says. “After being at their first game, feeling the atmosphere, and understanding the passion that this city has for the club, you can tell that it’s already made an impact. You can also see that the Crew is so excited to put on an excellent show and they’re pulling out all the stops.”

A Home for the Future: Building Encourages Room for Expansion

While putting the finishing touches on their high-quality home, the production team sent their former abode off with a fitting farewell during its last six matches (four in the MLS regular season and two in the CONCACAF Champions League). During this transition, the crew focused on providing a stellar in-venue show, but also getting colleagues onboard with the new technology that was waiting to be used at Lower.com Field. Despite these past couple of months being a bit of a daunting task, Shear still believes that Historic Crew Stadium ended with a formidable roar.

“There was so much nostalgia and history made inside that stadium that we wanted to pay it the respects that it deserved,” he says. “Our final game there was our first full capacity game in more than a year, and that was so important for not only us in the control room, but also the fans. It was a really beautiful moment that we all were able to share together.”

Although official matches won’t be played in the old venue anymore, it’s far from being demolished. In fact, the club’s new training facility is now sharing the same plot of land as Historic Crew Stadium and the latter will still be used as a venue for concerts, high school sporting events, and other community events. Lower.com Field is already a masterpiece, but the club has its eyes on expanding towards a bigger and brighter future. And while that may be months or years from now, the work done over the past year by Millen, Shear, and the entire team has set themselves up for success.

“We moved a wall seven inches into the hallway, so that’ll allow us to add two additional racks into our room,” concludes Millen. “We really have a great facility with great technology, and we hope to develop the best production in MLS.”

The Columbus Crew will play their next home match at Lower.com Field against D.C. United on Wednesday, Aug. 4 at 7:30 p.m. ET.