NASCAR Clash at the Coliseum: Fox Sports Goes All Out With 1080p HDR Workflows at Historic Venue

Throughout the 99-year-history of the Los Angeles Memorial Coliseum, the venerated venue has hosted a profusion of professional teams, collegiate programs, and international sports competitions. On Sunday, the National Historic Landmark will be home to another spectacle: the Busch Light Clash. Fox Sports will be behind the wheel for this broadcast and will use this preamble to the NASCAR season to showcase the building as well as to test new equipment.

Stroke of Luck: Rams’ Return to the City Gives the Venue a Facelift

The broadcaster’s journey to producing this event began in September 2021. During the final months of last year, Fox Sports began working closely with the necessary personnel at NASCAR on mapping out their strategy. Led by Field Technical Producer George Grill, the preparation process was significantly affected by the ongoing COVID-19 pandemic. 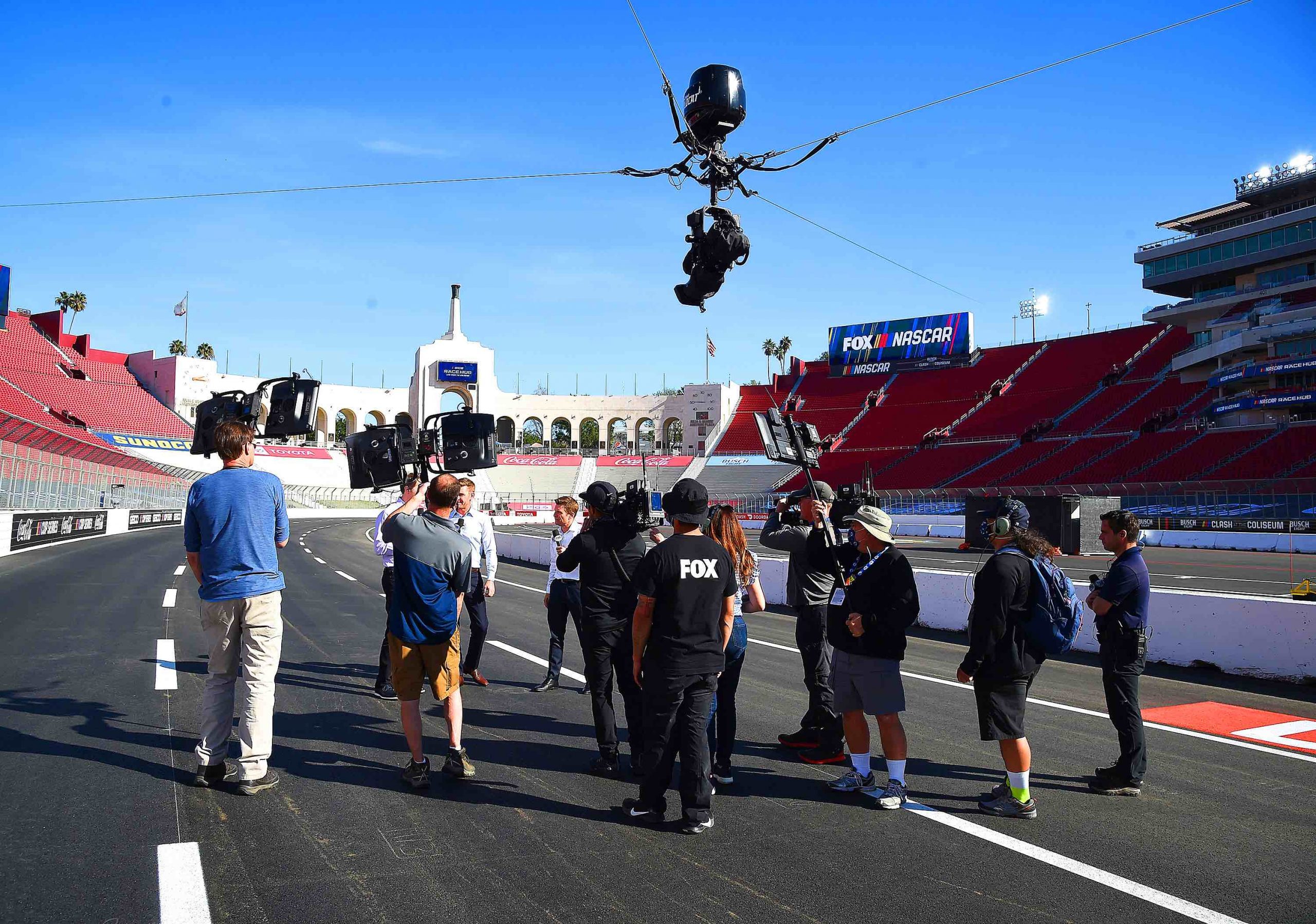 The L.A. Coliseum is allowing Fox Sports to use a Skycam in the lower bowl for NASCAR’s Busch Light Clash. (Photo: Frank Micelotta/Fox Sports)

“It has come a long way [over the past five months],” he says. “We had five onsite visits and a lot of phone calls and Zoom meetings to discuss logistics.”

From the broadcaster’s point of view, the main challenge in putting on this event was working in an edifice that is nearly a century old. Although thousands of events have taken place at the Coliseum, it has never hosted a NASCAR race before. This means that stationary camera positions were constructed to shoot humans playing traditional sports or lower-speed motorcycle races, not stock cars accelerating at blazing speeds.

In addition, the aging building presented another operational hurdle: an infrastructure with outdated wiring. Luckily, when the National Football League announced that the then St. Louis Rams would return to the City of Angels in 2016, the venue was refurbished and received an updated technological foundation. 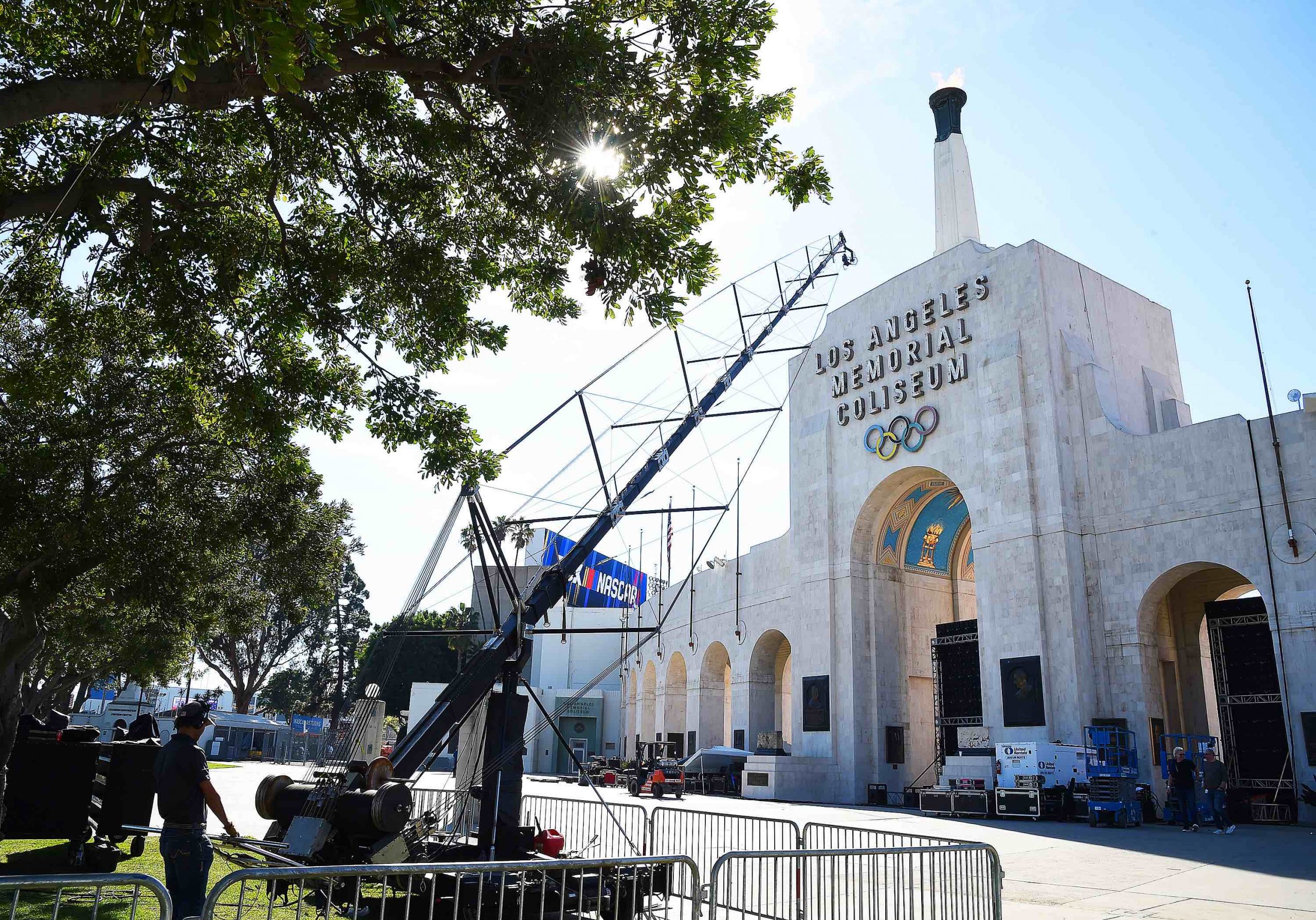 “The whole building got rewired, which was a great thing because our connectivity is up to par,” says Matt Battaglia, director, remote engineering, Fox Sports. “Slash positions are the same, but we moved our main camera positions up two levels from where you’d usually have them for a football game [at the Coliseum].”

Although these camera angles could be considered a detriment to the broadcaster’s typical NASCAR coverage, the production team is capturing this look to put the track into a tight frame. The decision not only is a stylistic choice but also brings the viewer closer to the track.

“We’ll have robos around the track,” notes Grill, “but most of our cameras are high looking down at the track. We want to keep that close and tight shot that the venue is providing us.”

The setting is also forcing the production crew to get creative with the plan of attack. For example, the Coliseum’s original footprint doesn’t allow team garages or a typical pit road to be located inside the lower bowl. For the former, a temporary structure will be erected in the parking lot of the adjacent Banc of California Stadium, home to Major League Soccer’s LAFC. The procession of cars to the tunnel will be captured with RF robos as they head toward the entrance tunnel to the track. 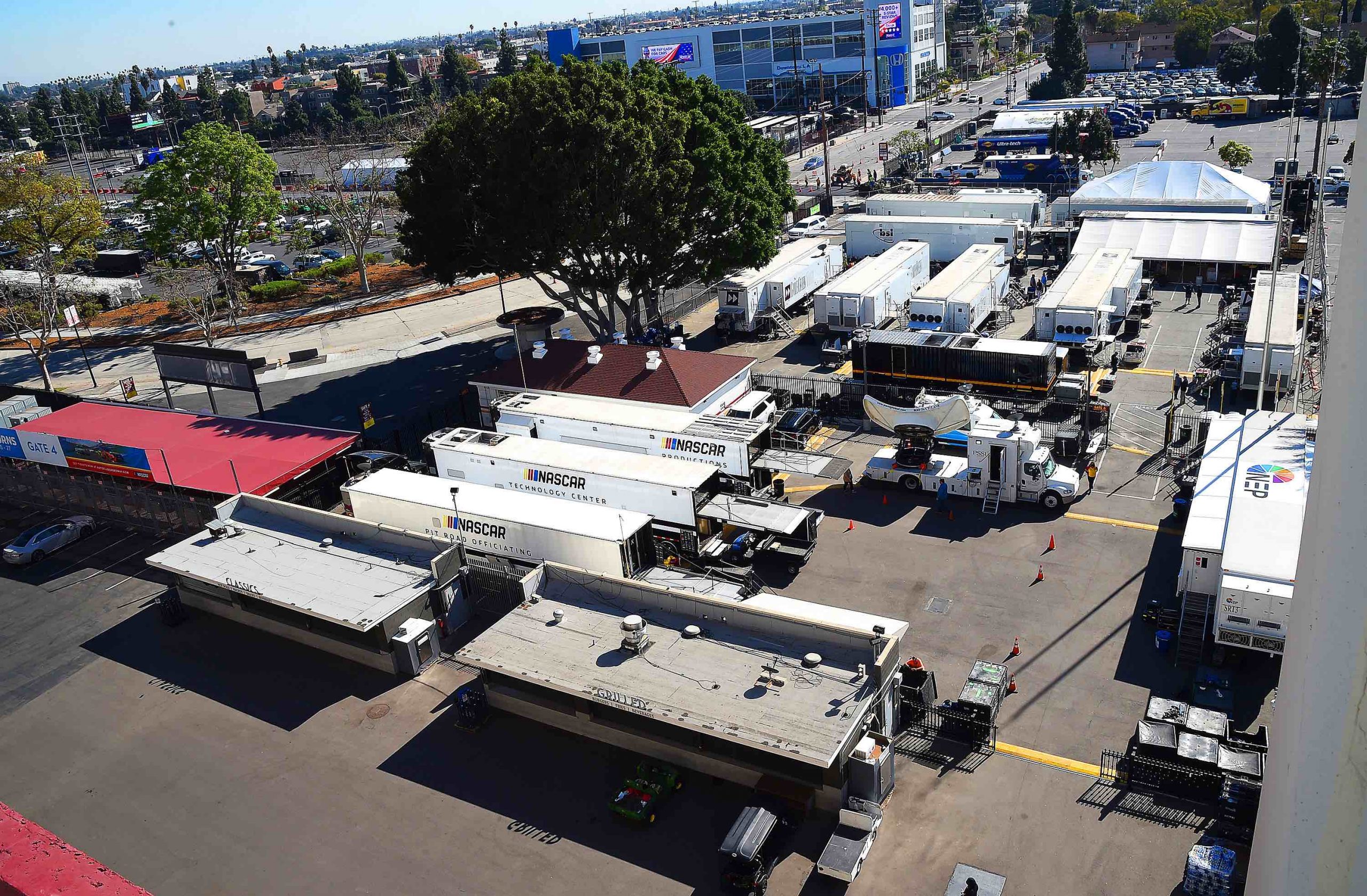 Game Creek Video Cleatus is at the center of the production compound. (Photo: Frank Micelotta/Fox Sports)

On the more notable side of the camera complement, Fox Sports will deploy a handful of tech pillars that will be used at subsequent races throughout the season. Beverly Hills Aerials, located less than 10 miles from the Coliseum, will supply live drone shots near the track and the surrounding area. A Strada Crane will provide swooping shots that look over the famed Peristyle. One of the more prominent technologies will be the use of a Skycam. An application normally not seen because of the expansiveness of NASCAR usual venues, the Coliseum’s confined shape is working to the broadcast team’s benefit. 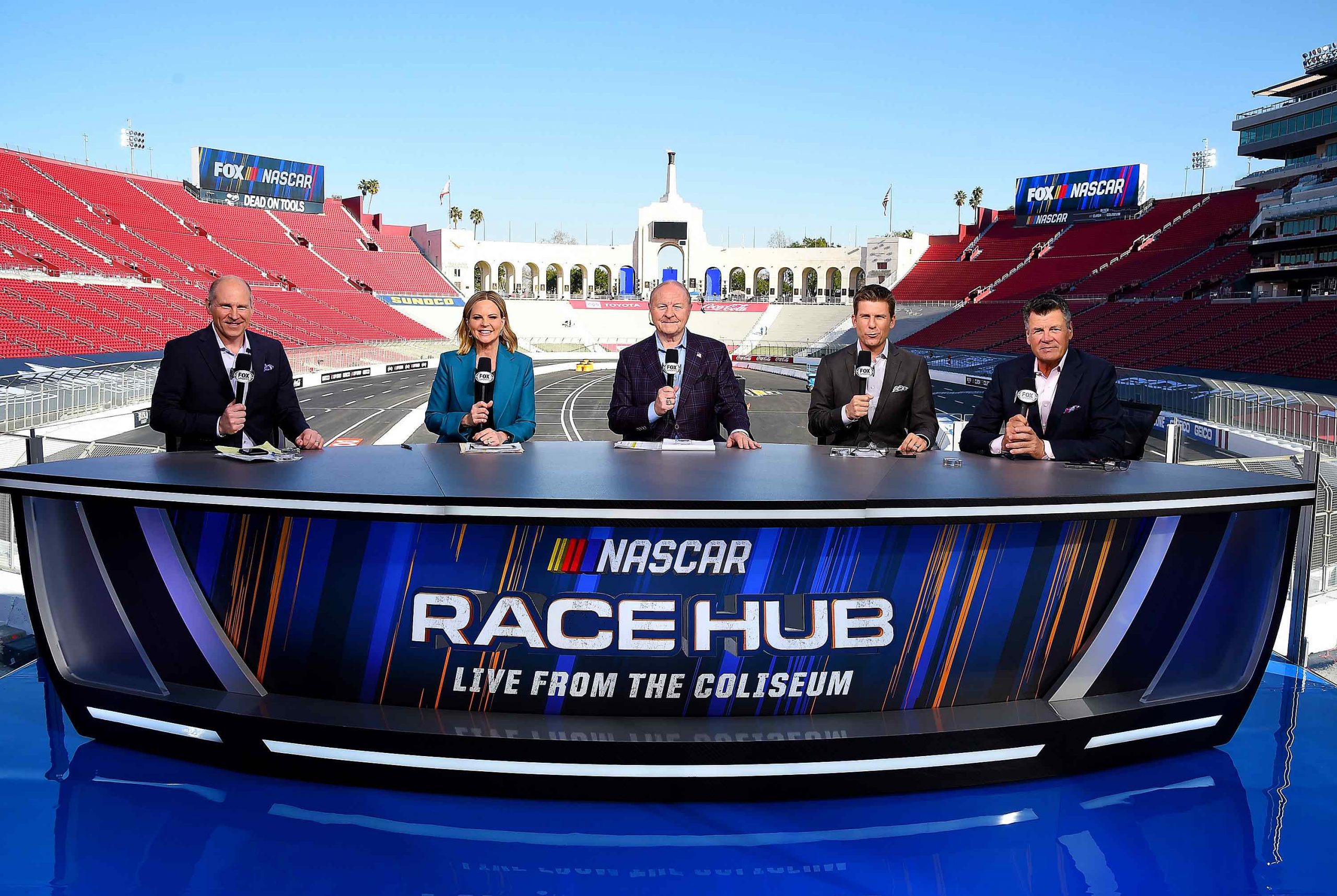 Outside in the compound, the onsite crew is working inside a new and improved truck for this preseason race. Game Creek Video Cleatus mobile unit, which is typically saved for the Daytona 500, will be on hand with added improvements made in the offseason at Fox Sports’ Los Angeles headquarters. At the conclusion of Sunday’s race, Cleatus will stay on the West Coast and facilitate operations for the Auto Club 400 on Sunday, Feb. 27 at Auto Club Speedway in Fontana, CA — which is 51 miles east of the Coliseum. For the Daytona 500 on Sunday, Feb. 20, the network will roll in Game Creek Video Encore in Cleatus’s place. 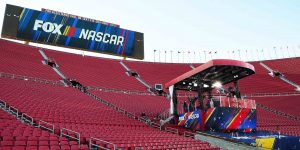 The main studio set is foldable and is positioned to have the Peristyle as a dramatic backdrop. (Photo: Frank Micelotta/Fox Sports)

“Since we’re building out our 1080p HDR workflows for 4K shows throughout the season],” Battaglia explains, “we now don’t have to change a truck [for the Clash]. We’re still providing 720p shows for the majority of fans watching from home.”

Although an updated wiring system has solved a huge headache, another lucky break came courtesy of the Rams. Since the team hosted the NFC Championship Game at SoFi Stadium, crewing wasn’t an issue with a wealth of talent already in the area. In addition to the 375 credentialed staffers at the Coliseum, remote operators will be working offsite in a variety of locations: the nearby Vault, EVS and graphics at NEP Group’s facility in Pittsburgh, and editors from their respective homes.

Away from the newly created asphalt track, NASCAR fans can get ready for the race with a full slate of pre-race coverage. NASCAR Race Hub, typically hosted out of Fox Sports’ studio in Charlotte, NC, has been onsite all week for in-depth previews of the Clash. In addition, the broadcaster’s studio team has been bullish on creating different looks for the shows deriving from the venue. Starting at 11 a.m. ET on Sunday, all three sets from the Coliseum will be used in various capacities. The first set — housing the main on-air team and covered by three cameras, a jib, and a wireless RF handheld — will have a desk with a stunning and dramatic backdrop. 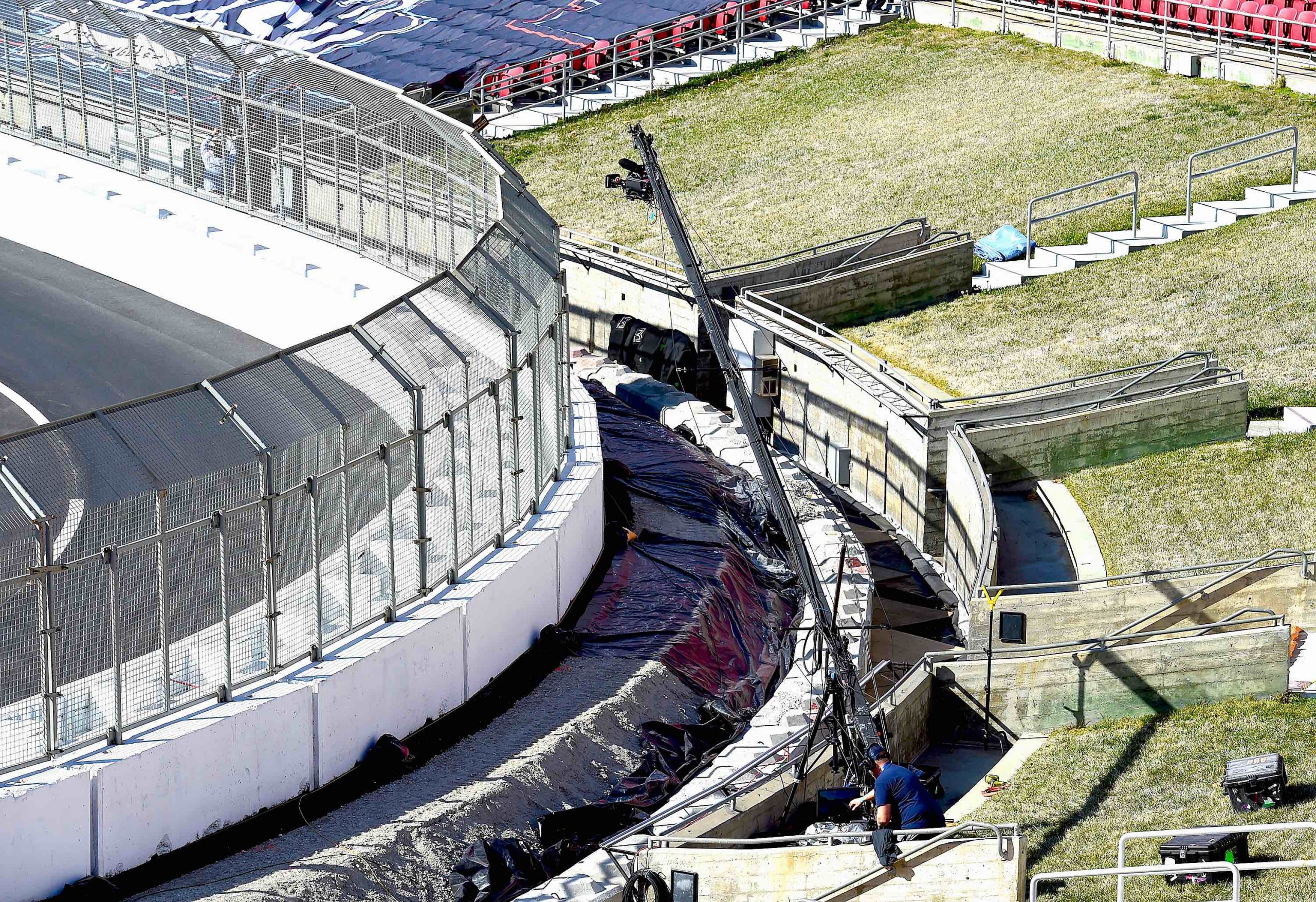 A jib will be positioned next to the track. (Photo: Frank Micelotta/Fox Sports)

“We would usually build our big studio sets on the concourse or outside the stadium,” says Amy Burns, manager, remote studio operations, Fox Sports, “but, this time, we’re located on the opposite end of the Peristyle. We’re expecting a sold-out crowd, so one of our biggest goals was to bring the iconic look of the Coliseum home to the viewers.”

To pull it off, the studio-operations team turned to Filmwerks for a suitable solution. The result is a lightweight set that neatly folds in on itself, via collapsible mechanical arms, and doesn’t take up too much seating space in the lower bowl. A secondary activation at a higher vantage point, featuring a podium and two cameras, will offer sweeping vistas of Southern California.

“We have it up on the top tiers of the building,” says Burns, “so it will oversee Downtown L.A. and the Hollywood sign. Our talent will be interviewing all the celebrities that will be coming by [that area].”

A tertiary setup will be a red carpet featuring additional celebrities entering the building.

Sports fans have recently been treated to numerous games being played in unique locales: college football at Bristol Motor Speedway or a MLB stadium, college basketball played on an aircraft carrier, or the NHL’s annual Winter Classic and Stadium Series. It’s not a new concept, but, in less than a year, viewers will have watched two distinct instances when cinematic storytelling comes first and the action comes a close second. The first was last summer’s MLB at Field of Dreams in Dyersville, IA. The second will be this Sunday’s event in Los Angeles. The common denominator boils down to Fox Sports’ being at the core of those productions. 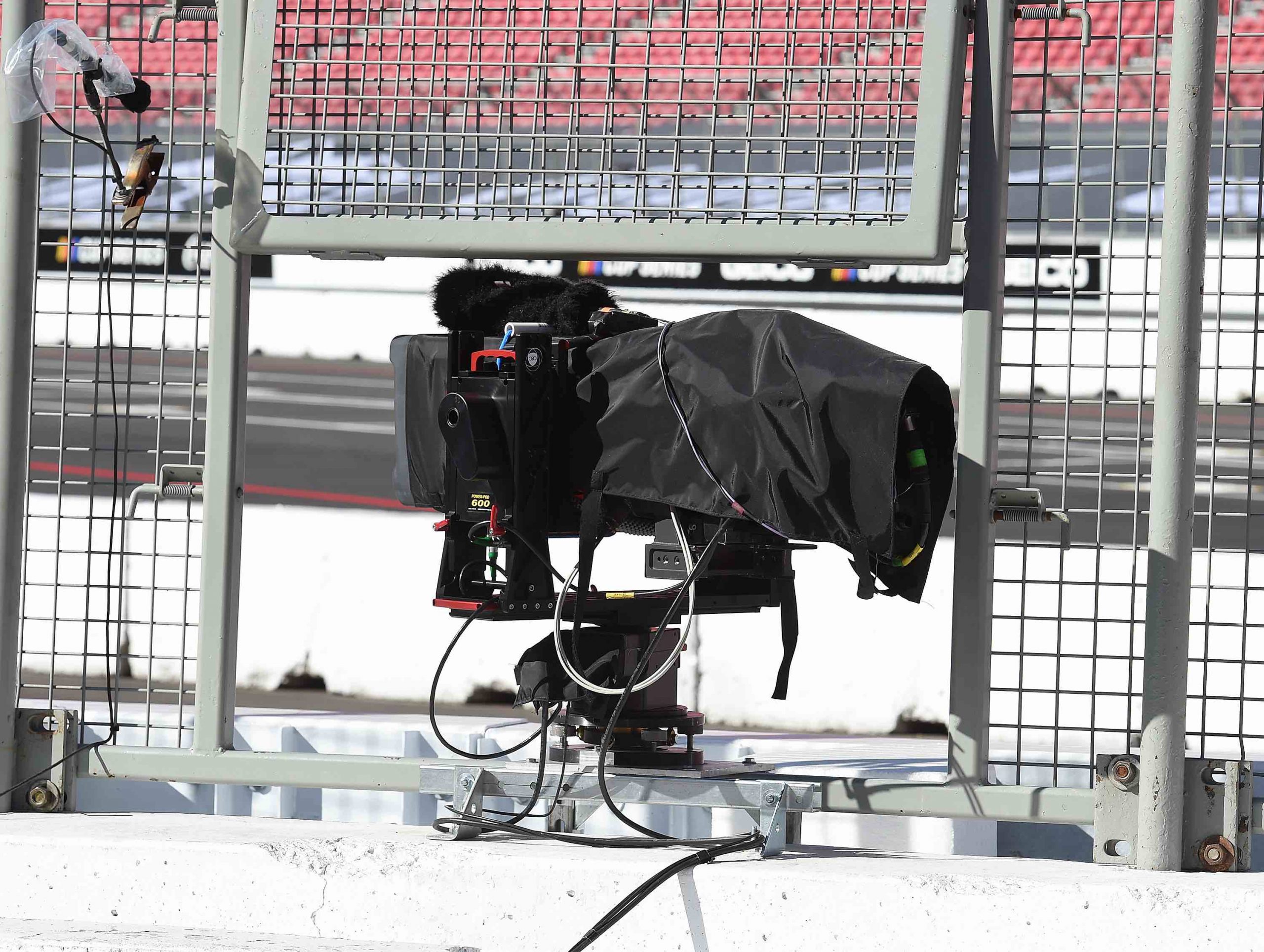 “This is our version of Field of Dreams,” says Battaglia. “I’m a native of Southern California, and I’ve watched almost everything out of the Coliseum, including the 1984 Summer Olympics. Watching this track get built and seeing it completely finished gets you pretty emotional. This is going to be really cool event to work on.”