“It has been a tremendous honor and pleasure to be a part of Thursday Night Football, working alongside the inspiring teams at Prime Video,” says Toprak. “Our goal was to create a memorable theme that is both current and timeless. We leaned on the big brass and muscular energy of legacy scores, in combination with unique, lyrical moments, to achieve a feeling of heart and soul. I could not be more excited to share this new anthem with the world, and hope it will connect with fans and players alike as we make TNF history.”

The TNF anthem, recorded over two days this month at the historic Ocean Way studio in Nashville with Toprak conducting a 70-piece orchestra, will be the first new theme music for a rights holder of an NFL package since the famed John Williams composed “Wide Receiver” for NBC Sports in 2006. Toprak also becomes the first woman to compose the original theme music for an NFL media package. 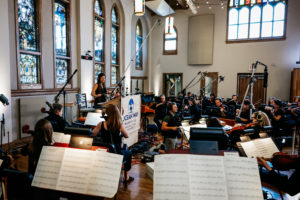 “Pinar is a remarkable talent at the top of her craft, and a joy to work with,” says Marie Donoghue, VP, Global Sports Video, Amazon. “We believe she has delivered an epic and timeless theme that will elevate our presentation and become synonymous with TNF on Prime Video for years to come.”

Toprak collaborated closely with the TNF production team — including Jared Stacy, Prime Video’s director of Global Live Sports Production, and Fred Gaudelli, executive producer of Thursday Night Football on Prime Video—to create a pulsating and uplifting score. The music will set the stage for the streamer’s exclusive wraparound coverage, accompany the in-game broadcast, and elevate the viewing experience each Thursday night throughout the season.

“I’ve been lucky to be involved with multiple NFL theme-music projects, and this was the most intelligent and collaborative approach that I’ve ever been a part of,” says Gaudelli. “Pinar was outstanding from the start, gave thoughtful consideration to our feedback along the way, and composed a score that features intensity, drama, and a ‘hummable hook’ that gets inside and stays with you.” 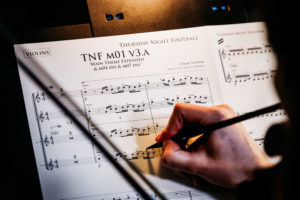 The complete score and its title will be introduced prior to Prime Video’s inaugural preseason game between the San Francisco 49ers and Houston Texans on Thursday, August 25.
Toprak is an Emmy-nominated composer, conductor, and performer and is the recipient of an ASCAP Shirley Walker Award and three International Film Music Critics Association Awards for Best Original Score. She has an unmatched gift for creating iconic thematic scores for all genres, including her work on Captain Marvel and Fortnite, as she became the first woman to score both a film and video game with gross revenues of over $1 billion and $5 billion, respectively.

Toprak brings her fresh perspective and unique vision to a diversity of others musical projects. Aside from Thursday Night Football, she has composed and produced the soundtrack for Disney theme parks, including the new Epcot theme, wrote and produced music for Christina Aguilera’s 2019 Xperience live show in Las Vegas, and conducted Billie Eilish’s performance of “No Time To Die” at the 2022 Oscars ceremony.