More than 150 credentialed personnel are onsite in Williamsport, PA

After three long years, the Little League Baseball World Series has returned to its traditional format of international teams in Volunteer Stadium and domestic squads in Howard J. Lamade Stadium in Williamsport, PA. For coverage of the tourney, ESPN has implemented some notable changes in production strategy: a return to the 1080p format, a realigned broadcast compound, and a new home for onsite studio shows. 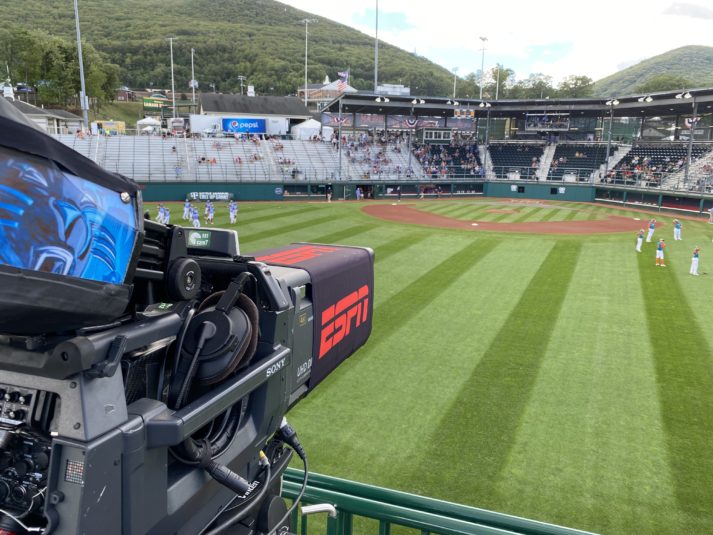 A shot from the centerfield camera at Volunteer Stadium in Williamsport, PA, before the LLBWS Latin America vs. Panama game on Aug. 23.

“2021 was a bit of a reduced year, without crowds and the international teams, so we had to rely on our REMI model,” says Joe Rainey, senior operations specialist, ESPN. “With the return of our production team dedicated to games at Volunteer [Stadium], we have a much higher level of execution between both fields.”

In 2019, for what would be the last pre-pandemic tournament, ESPN switched from 720p to distribute all games in 1080p. The tournament is conducive to producing every game in this format, but, last year, with resources limited, the broadcaster reverted to 720p. Last year’s competition relied heavily on REMI and REMCO (remote-controlled) workflows in response to the prolonged impact of COVID-19.

“Since games at Volunteer were REMI [productions],” notes Rainey, “those shows drove the total number of transmission paths up to a point where 1080p couldn’t really be supported. Since we’re in a REMCO model this year, I don’t need as many paths going out, but I’m handling a little more satellite distribution than I did in 2019.” 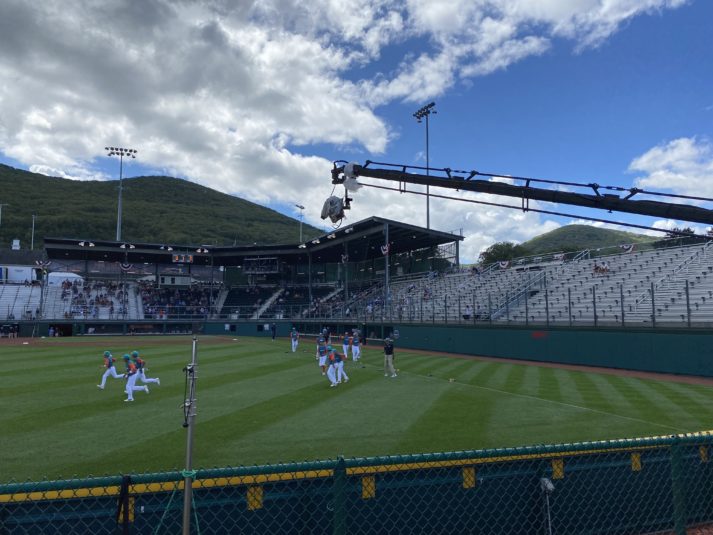 Volunteer Stadium also has a jib camera in the outfield.

1080p shows have their own set of priorities, but, with remote techniques becoming more routine, Rainey and his staff are handling the efforts of offsite employees as well. For example, any given game at either stadium will require a handful of remote paths. On the replay front, two EVS operators are located at ESPN headquarters in Bristol, CT. Viz and graphics operators also handle the production from Bristol, and the scorebug can be produced from Bristol or even the operator’s home.

In addition to maintaining remote signals, Rainey was tasked with adjusting the layout of the broadcast compound. An increased onsite presence of more than 150 credentialed employees required additional housing. The solution was to install a permanent double-wide operations trailer and single-wide operations trailer. ESPN will have fiber and cable in place for future tournaments but at the cost of some valuable real estate.

“The compound is a little bit tighter,” he explains. “We couldn’t fit the normal four trucks across. We have three trucks [side by side] and one teed off at the front. When games at Volunteer finish early, that truck will be able to get out of the compound. Ultimately, the advantage of having these permanent structures is speeding up our installation next year and allowing us to be more efficient.” 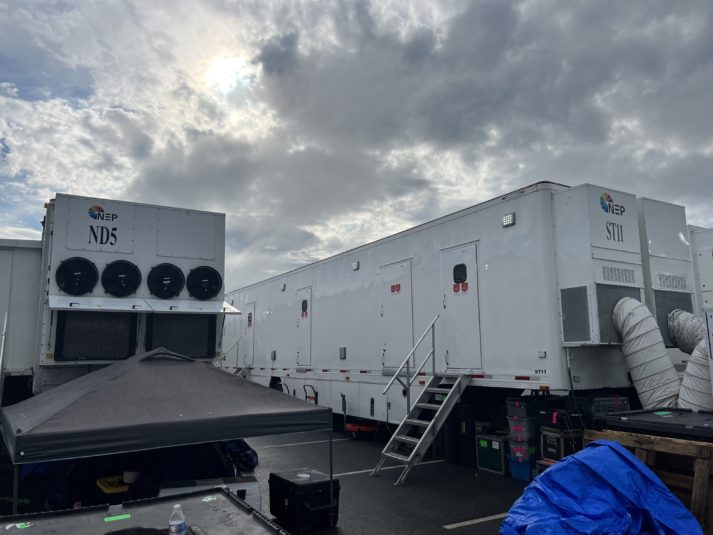 A trio of NEP mobile units were used during the MLB Little League Classic on Aug. 21.

The redesigned compound features a pair of NEP mobile units: EN3 A and B for games at Lamade and Supershooter 5 for contests at Volunteer. In addition, Creative Mobile Solutions Inc. (CSMI) is providing three onsite edit bays, an increase from two in 2021.

All 36 televised games will deploy unique broadcast technologies. Taking center stage is implementation of 4DReplay for super-slow-motion views of both hitters and pitchers. Comprising 50 individual cameras positioned on the lower level behind the fence, the devices are trained on the batter’s box and pitcher’s mound to create a full 180-degree composite of the play.

Home-plate umpires are wearing Ump Cams. The POV device is strapped to the mask for real-time views of what they see throughout the game. With protective material surrounding the body of the camera, Ump Cam is designed to withstand foul balls from close range.

Part of the 27-camera show at Lamade Stadium, a Technocrane is located behind the left-field wall for sweeping views of the complex. Productions at Volunteer Stadium use a standard jib camera. Up in the air, ESPN’s internal drone team provides aerial footage throughout the tournament.

Logistical changes and shifting puzzle pieces aren’t limited to the broadcast compound. In previous tournaments, the studio that handled studio programming and transitions between the televised games was in a set in between the two venues. Tom Engle, Kevin Negandhi, and the rest of the operations team developed a separate structure capable of holding the physical set.

“Our studio coverage is now coming out of our centerfield platform with an additional camera from last year,” says Leigh Michaud, operations manager, ESPN. “That setup has rolled into our live game productions as well as some segments for SportsCenter.”

On the Major Side: Orioles and Red Sox Face Off in MLB Little League Classic

On Aug. 21, the broadcaster’s MLB property, Sunday Night Baseball, took part in the festivities from Williamsport. The day began with the SNB broadcast team of Ravech, Perez, David Cone, and Buster Olney on the call for the 11 a.m. matchup between the Midwest and Mountain regions and was capped off with the fifth MLB Little League Classic, between the Baltimore Orioles and Boston Red Sox. The SNB crew led the operations at Muncy Bank Ballpark at Historic Bowman Field — home of the Williamsport Crosscutters of the MLB Draft League — located 5 miles west of the Little League World Series complex. 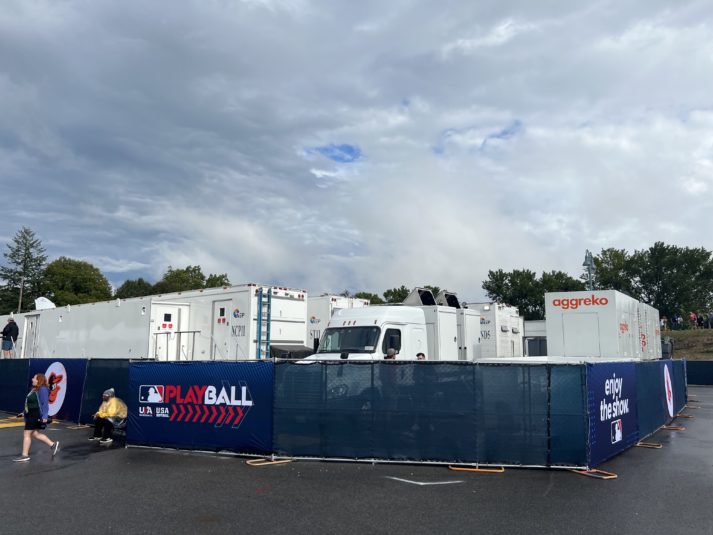 Along with live scenic drone shots, the broadcaster offered two presentations of the ballgame. The traditional show on ESPN featured the talent in numerous conversations with miked players: Orioles outfielders Cedric Mullins and Austin Hays in the top of the third inning, Boston Red Sox infielder Christian Arroyo in bottom of the fourth, and Orioles catcher Adley Rutschman in the bottom of the fifth. Former President George W. Bush joined the team in the booth during the first two innings.

In the compound, NEP played a large role in the MLB production with its ND5, ST11, and NCP11 mobile units parked outside the venue. VP, Production Phil Orlins, the industry veteran driving shows for the Little League Baseball World Series, was also at the helm of this regular-season bout between two American League East foes.

The Girls Tournament: A Look Back at Little League Softball World Series 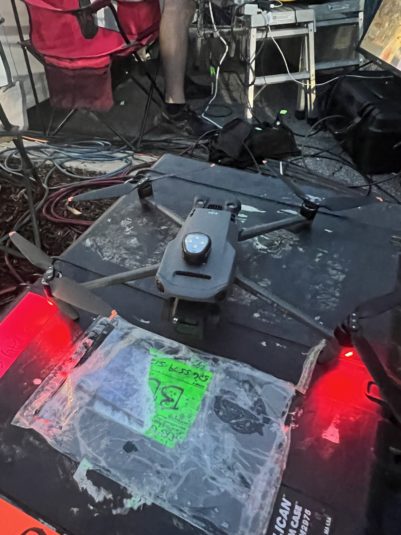 This year’s tournament adopted a tiered approach for onsite efforts. For the games live-streamed over the broadcaster’s digital platforms, the crew leveraged six standard hard cameras, but, when coverage shifted to linear television, the camera complement was enhanced with a slow-motion robo for close plays at the plate and the delivery of certain pitchers, an internal-operated aerial drone, Ump Cam behind home plate, an outfield jib, and a handheld connected via TVU Networks to the compound.

The tournament gave the broadcaster another opportunity to highlight even more fun and excitement. “The days are long, but the team is incredible,” says Jarrett Baker, manager, remote operations, ESPN. “The Softball World Series is a highlight of the summer, and we’re already thinking of ways to grow our coverage next year.”

International teams are once again showing off their skills in Williamsport, and, in a new twist to this year’s tournament, even more countries are being represented, with a total field of 20 teams in a modified double-elimination format. With Puerto Rico and Panama added to the tourney and Metro and Mountain on the domestic side of the bracket, baseball fans have been able to enjoy an additional full day of coverage.

“We’re really energized to produce this event onsite,” says Michaud. “Being from Bristol, I used to go to the Bristol Regional every year as a kid, so I was happy to be asked to be a part of something that has always been really close to me.”