A microphone is to an A1 what a nicely balanced knife was to Jim Bowie 150 years ago: a personal choice based on a technical and aesthetic factors but also a practical choice that let them carve out the world as they see it. Aboard trucks filled with the staples of sound — the shotguns and lavs that serve most of the audio capture for broadcast sports — there’s still plenty of room for individual picks that can make a surprising difference in how a show sounds.

On the Snare and on the Court 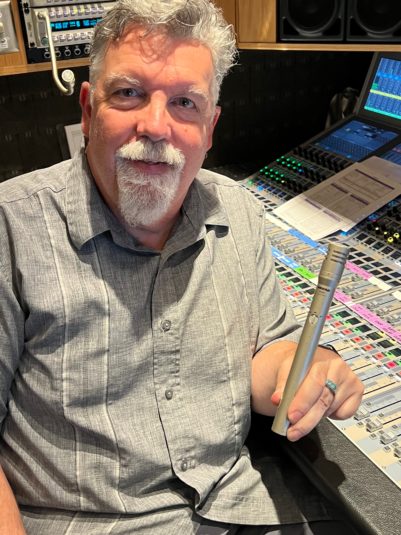 “A ball bouncing is no different than a stick hitting a snare drum,” says Dave Grundtvig, supervising A1 for Turner Sports’ MLB and NBA games, in naming the Shure SM81 as his favorite alternative go-to mic for sports on-air. “The way I’ve always looked at it, the audience for an event is no different than the listeners of a music recording. You want to give them the same experience live that you get in the studio, so I’ll bring studio-grade microphones out for broadcast applications.”

He has used the SM81 in arrays as crowd-sound–capture mics or even as pickups for more-transient sounds: for NBA games, for instance, at floor level for sneaker squeaks and ball bounces, on scorer and announcer tables, or even on backboards. He has even fit them into parabs on NFL sidelines, despite the microphone’s 7-in. length. All, he says, in pursuit of the SM81’s remarkably flat frequency response. (The manufacturer’s response graph varies only a single decibel at any point from 50 Hz to 16 kHz, and the response is virtually ruler flat in the 5-kHz to 10-kHz range.)

Overkill for a sports broadcast? Not according to Grundtvig, who notes that, as sports on television moves towards more-critical listening environments, such as immersive audio, viewers are going to be able to pick out individual effects more clearly. “Every element has to sound good and clear before you even get to the mix. This is my mic for that.”

“I like the Shure VP88 when a phase-coherent stereo image is important, such as on a 50-yard-line center crowd mic or basketball floor mic,” explains Chris Lewis, who has mixed sports sound for ESPN, NBC Sports, and CBS Sports and for Red Sox, Phillies, 76ers, Nets, and Panthers games. “It’s usually something I can leave up, instead of the single-point 416s, which usually creates a phased wash.

“You can also play with M/S feature, if you wish and have the time and board space,” he continues, referring to the microphone’s internal mid-side matrix with three settings for different degrees of stereo-image separation. “Mid-side technique is great for your front-row–seat mic center court or 50-yard line and more. You’ll get all the action in front plus controlled ambiance from the sides. I’ve tried every stereo configuration known, but, in broadcasting, many use X-Y or spaced pairs because it’s maybe easier. I’ve found X-Y difficult to use because there’s no way to know where the capsules are, to align them properly in a typical situation. You’re going to get cancellation no matter what. Plus, I’m not usually out there setting it up; it’s up to the A2’s knowledge base in getting a good placement. With the VP88, it’s easier because you just place it toward your source and select mid-side. On the console, you’ll need three channels: one mono for mid and one stereo for side. Flipping one out of phase gets you a perfect image and perfectly folds to mono as well.”

Lewis says phase coherency is a matter of constant awareness for SFX on sports programs.

“For arena games, I’m always watching for phase,” he explains. “If I’m mixing an MLS game, for instance, there are potentially 16-20 mics out on the pitch. If I have them all up, it’s a soup. I have to be judicious and conscious of where and when a mic goes up. If I mix it in zones where the play happens to be, each zone needs its own phase cohesion. And a good way to know if it’s in phase with itself is to use a perfect-phase technique like mid-side. The stereo function of the VP88 is also phase-correct, so you can’t go wrong. I use the mode side when I want a more focused sound to lock to the screen action; the stereo sound is quite wide, which works better for crowd, fan sections, or bands.” 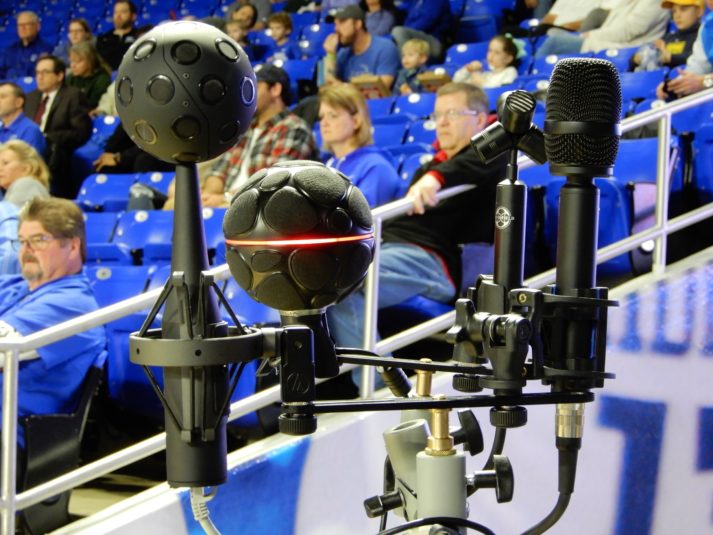 “For example,” Baxter explains, “a microphone near home plate, first, and third base would cover the atmosphere of the venue, plus any sound that is in proximity of the base plus add a nice sonic texture to your mix.”

Both microphones can be found for around $1,500, which should make them affordable for sports production, and, he points out, the Sennheiser Ambeo microphone can interface directly to the Solid State Logic System T mixing consoles, easing some workflow concerns. The Zylia is a 3rd-order Ambisonics microphone using 21 MEMS transducers.

“Currently, the 3rd-order microphone needs a laptop,” Baxter says, “but Zylia is working on a model for sports applications with minimum latency. I have a chapter on immersive-sound microphone techniques in my new book, Immersive Sound Production, a Practical Guide with Focal Press.”