San Diego might not pop up in a discussion of large media markets, but, at the collegiate level, the city boasts one of the newest football stadiums in the U.S. At just over three months old, Snapdragon Stadium, the $310 million permanent home of San Diego State University (SDSU) Athletics, is providing a stellar fan experience for a community that’s passionate about sports.

“I think [the Aztecs] are thrilled to have a place to call home and create an experience that’s 100% their own,” says Brian Smith, director, operations, Snapdragon Stadium, Oak View Group, which manages the venue. “They can now come in and develop a show that they want without someone telling them they can’t do something.”

Amongst the Bricks: Crew Overcomes Challenges Throughout Construction

A little over two years after the groundbreaking, Smith joined the project in November 2021. Having served as director, events, during LAFC’s first season at Banc of California Stadium in 2018, among other positions, he offered in-venue production experience tailor-made for the SDSU project. New builds always pose multiple challenges, but, with the stadium inaccessible until a month and a half before the first football game (vs. University of Arizona on Saturday, Sept. 3), Smith was particularly integral to navigating this phase. During construction, Oak View Group and SDSU relied on the partners chosen for the job, particularly Clair Global Integration for equipment procurement and installation and AmpThink for networking. 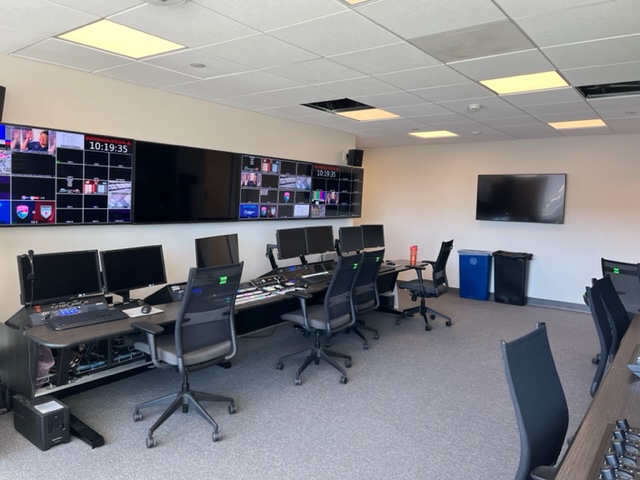 A mix of professional freelancers and SDSU students work productions in the control room.

“When the workload of technologies became heavier in April and May, [Oak View Group A/V Broadcast Manager Ceci Becerra] and I sat down to plan out the venue,” says Smith. “Some of the areas that we discussed were the modifications that were needed, what training needed to be done, and what systems needed to be worked on.”

Besides figuring out the necessary adjustments on the tech side, Becerra was tasked with recruiting freelancers who had worked at Dodgers Stadium, SoFi Stadium, and other sports venues throughout Southern California and pairing them with students working on games inside the control room. To bring the recruits up to speed, the department relied on Ross Video for training on the Ross-powered production tools deployed. Getting the crew acclimated to the new space was pivotal, and, although the team successfully grasped these workflows, these lessons were done amid unforeseen changes to construction.

“Timelines shifted constantly,” Smith explains. “Working within a post-COVID world, we’ve dealt with the ongoing supply-chain crisis, so we secured more than one set of pieces from different places and saw which one came first. Today, there are still some things that we’ll eventually replace with more of what is in line with what we were looking for.”

Heading into the Aztecs’ first full season in Snapdragon Stadium, the in-venue production crew is armed with some of the industry’s newest technologies. Inside the control room near the top of the building, Ross Video has a heavy presence throughout the back-of-house infrastructure. Driving each show are a Carbonite production switcher, Mira replay stations, XPression graphics for real-time and engaging visuals, and an Ultrix router. Other notables in the space are ClearCom for seamless communication, a Yamaha QL5 audio console, and Daktronics’ Show Control system software that drive the LED displays throughout the stadium. Equipment in the control room is also managing the Tripleplay IPTV system in the concourse, suite level, and general areas. 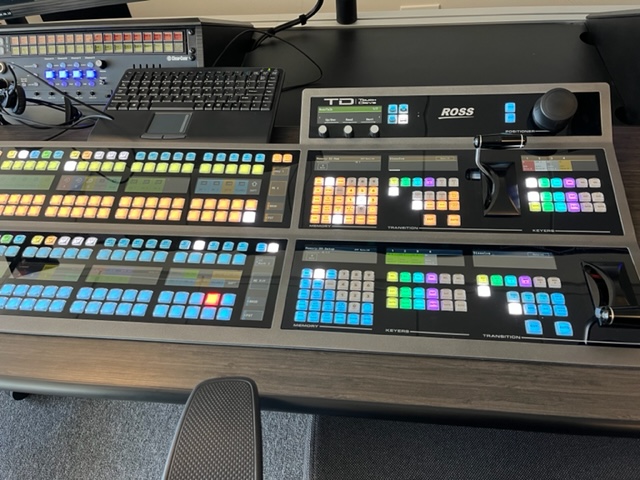 Ross Video has a heavy presence at Snapdragon Stadium, including a Carbonite production switcher.

Outside of the control room, fans at Snapdragon Stadium are treated to an exciting in-venue show featuring 19 Daktronics LED video displays at 10-mm pixel spacing. Totaling 8,400 sq. ft. and 7.5 million pixels, several fixtures anchor each production, including a 42-ft-high by 73-ft.-wide main display at 3,000 sq. ft. and a 26.5-ft.-high by 50.5-ft.-wide structure in the opposite corner. 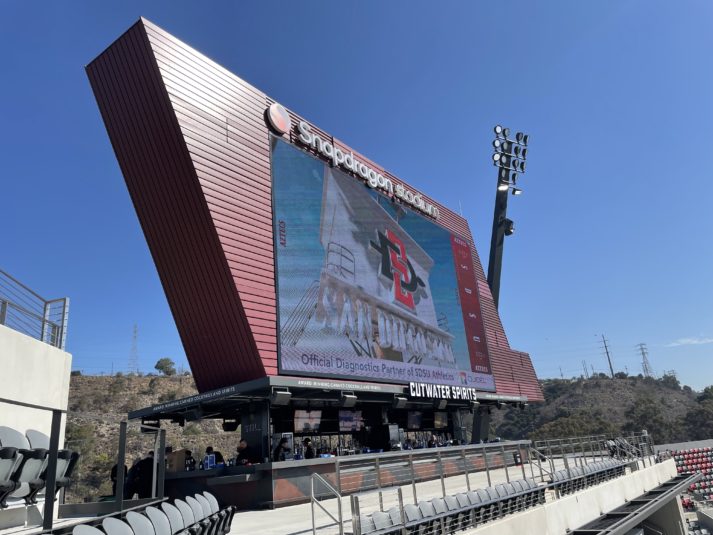 Besides SDSU football, the marketing department is responsible not only for men’s and women’s soccer and other programs but also for providing entertainment for the National Women’s Soccer League’s (NWSL) San Diego Wave. Headlined by U.S. Women’s National Team standouts Alex Morgan and Abby Dahlkemper, the first-year franchise made it all the way to the NWSL Semifinal vs. eventual champion Portland Thorns. The club’s inaugural season was played mostly in the University of San Diego’s Torero Stadium — less than 10 miles from Snapdragon Stadium — before moving to their new digs for their final two regular-season home games. Taking note of the impressive atmosphere being developed, the Wave decided to incorporate their thoughts and ideas into the already established run of show.

“They came in and didn’t want to necessarily reinvent the wheel,” says Smith. “We have a team of event managers that work with both teams, help drive planning calls, and make sure we have everything in line. Whether it’s an on-field presentation or a flyover, Ceci is coordinating with the Wave to update any special content.”

The Wave and Aztecs are the two main tenants, but more high-profile sports events and concerts will be headed to Southern California next year. On the sports side, Monster Jam will rev its engines January 7-15, Monster Energy Supercross will come to town on Jan. 21, the 2023 World Lacrosse Championship will take place June 21–July 1, and the San Diego Legion — one of 12 teams participating in Major League Rugby — will play all home games in the venue. As for musical acts, P!NK’s Summer Carnival with Brandi Carlile, Grouplove, and DJ Kid Cut Up will perform on Oct. 3. Festivities and games will be continuously added to the 2023 schedule, requiring the staff to be ready to roll at any time, but this past football season has proved beneficial for the team’s confidence and cohesion. 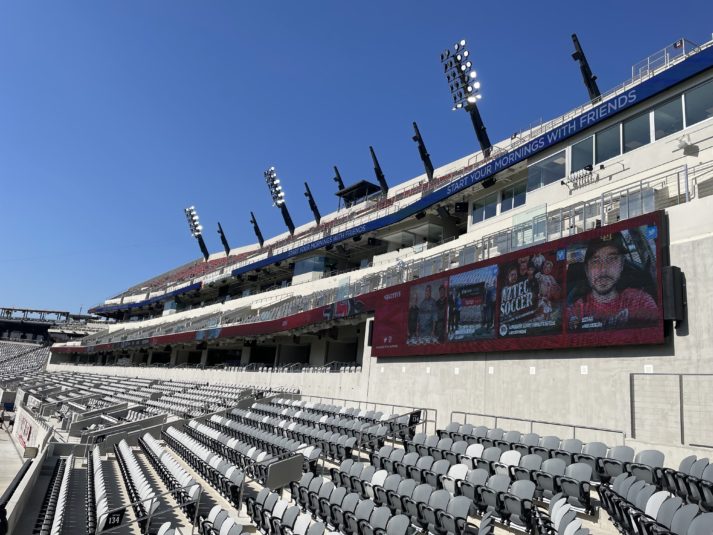 A total of 16 ribbon displays illuminate the venue for sponsorship messaging.

“[Shows] have gone really well,” says Smith. “We’ve made a few modifications here and there on how we’re zoning elements, but, other than that, they’ve been really smooth.”

Full-Time Home: SDSU To Use Snapdragon Stadium as Platform for Growth

“Working with [SDSU] and seeing what this means to them has been great,” adds Smith. “It’s a beautiful, state-of-the-art place that not many colleges get to have.”

San Diego State University will close out the 2022 football season vs. Air Force at Snapdragon Stadium on Saturday, Nov. 26 at 9 p.m. ET on CBS Sports Network.