The American League Division Series (ALDS) between the New York Yankees and the Minnesota Twins is getting underway tonight in New York City. After the weekend, MLB Network will wrap up their coverage for the year with another AL East participant — the Tampa Bay Rays, — for Game 3 of their series against the Houston Astros at Tropicana Field. With a rambunctious crowd in the “Bronx Zoo” as their backdrop, the network is excited to take a piece of the postseason pie in their eighth year broadcasting baseball’s favorite month on the calendar. 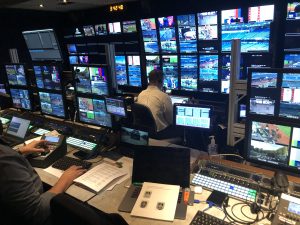 The network is using Game Creek’s Yogi and Edit 3 in New York as well as NEP’s Iridium and Game Creek’s Edit 4 in Tampa Bay.

“Producing these two games is a real privilege for us because it’s not just another day. This is one of the biggest days of the year,” says Susan Stone, SVP, operations and engineering, MB Network. “We treat [these games] with seriousness and gravitas just like the clubs do.”

With Fox Sports as the lead broadcaster in most of the games in both opening-round series, a majority of their technology and equipment have been installed inside both venues. As MLB Network warms the seats in the front bench during Game 1 in the Empire State and Game 3 in the Sunshine State, they will be using shared resources due to a relationship established back in 2015.

“We take their [pre-established] facilities and build upon it,” says Stone. “We have a great relationship with Fox throughout the season, the postseason, and other jewel events like the All-Star Game. We partner on a lot of events, but these games are the culmination.”

Onsite in New York, Game Creek Video is providing A and B units of their Yogi mobile production truck as well as their Edit 3 unit, which is a staple on MLB Network’s live game coverage. Down south, the network will leverage NEP Group’s Iridium and another Game Creek Video truck, Edit 4.

In the stadium, both games that will be delivered in 720p have a total complement of 27 cameras. Specialty cameras in the bunch include four phantoms from Inertia Unlimited, four Fletcher robos, two Sony HDC-4300 slo-mos, and an RF handheld. Throughout the venue, 13 hard cameras will be anchored to capture the plays of the game. 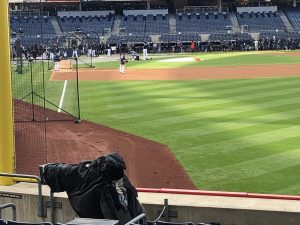 In terms of staffers, a total of more than 115 will be on hand for both contests. Back at home in Secaucus, NJ, the network has full connectivity to their two full edit rooms that will process content produced onsite. The team is also facilitating SAP closed captioning from headquarters as well.

“We extend our EVS network to [the stadium], so the edit rooms can live drop to the [onsite] servers in real-time,” says Jason Hedgcock, senior manager, remote technical operations, MLB Network. “We also extend our Riedel network for the communications that we’re having [back and forth to Secaucus].”

Throughout the entire year, MLB Network has become the one-stop shop for any and all things baseball. From the Winter Meetings and Spring Training to the MLB All-Star Game and the Trade Deadline, they have become a 24/7 hub of content that fans can chew on. During this special time of the year, the network shifts into another gear, producing more than 215 hours of wall-to-wall programming from across the river in New Jersey and on the field that prepares fans for the matchup and also puts a bow on the night’s action.

Down the right-field line, the MLB Network studio set is residing in foul territory for a full two-hour pregame show with a cast of familiar faces that include Greg Amsinger, Al Leiter, and Harold Reynolds. After the game, the attention heads back to Secaucus for a two-hour postgame show. 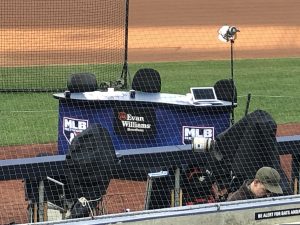 Onsite programming is being featured at both Yankee Stadium and Tropicana Field.

Up in the broadcast booth, Bob Costas, John Smoltz, and Tom Verducci will be behind the mic for Game 1 in New York. In Tampa Bay, Costas and Verducci will join Joe Girardi and Jim Kaat for Game 3.

On the network’s social media channels, the NTT Ballpark Cam system is churning out digestible, digital-native content from within the stadium.

Nearing the Finish Line: MLB Network’s 2019 Swan Song
In the briskness of New York (temperatures are expected to be in the low 50s) and the controllable indoor setting in Tampa Bay (at a comfortable 72 degrees), MLB Network will place the finishing touches of a season that included an uncountable amount of daily programming and close to 40 live broadcast games.

“This whole crew is the same one that’s done 26 Showcase games and almost all of the 13 YouTube games,” says Stone. “This is a very bonded unit because they’re immersed in baseball production all year long.

MLB Network concludes the 2019 season this Monday in Game 3 of the ALDS between Tampa Bay and Houston.