While ESPN is providing a fairly neutral approach to the 2020 NBA Draft, organizations around the league are creating ancillary content to surround the linear broadcast. In Georgia, the Atlanta Hawks’ in-venue and content teams will be at work at State Farm Arena to produce the live-streamed 2020 Virtual Draft Party Driven by Kumho Tire on the franchise’s website starting at 7:45 p.m. ET.

“We’re going to use our control room to produce this Draft show,” says Matt Shafer, senior manager, video integration, Atlanta Hawks. “We wanted to be able to leverage all of our hardware that is already here [in State Farm Arena] and will be sitting dormant until the season starts.”

Despite the ongoing COVID-19 pandemic, current circumstances have opened up production avenues that had never been a priority. The Hawks’ staff have adopted a handful of TVU Networks technologies that have been paying dividends in the content department. Most notably, two pieces of equipment — TVU Anywhere and TVU Partyline — will be critical in providing a clear and precise internet connection. 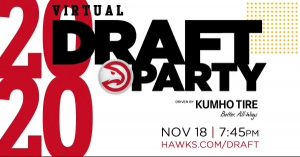 “We have a dual transceiver and a single transceiver in place,” says Shafer. “The main reason we went with TVU [equipment] was the low latency: we have the ability to go down to 500 ms, which is superfast for streaming.”

In addition to being the foundation of the live stream, the duo of TVU products will be able to integrate guests joining live from offsite locations. For example, actor and comedian DC Young Fly will be a special guest, breaking down the Hawks Draft selections and reflecting on being a lifelong fan of the franchise.

Remote resources have been key for many events, such as the NFL Draft in June and NHL Draft Lottery in July, and TVU’s remote capabilities will play a key role in tonight’s proceedings. Even so, the Hawks will roll with a crew of six members in the State Farm Arena control room.

The production team will position its two main hosts, The Morning Culture’s Big Tigger on V-103 The People’s Station and Fox Sports Southeast play-by-play commentator Bob Rathbun, near the camera well of an elevated concourse to use the centerhung videoboard as a backdrop display.

The Hawks have become synonymous with top-notch energy and hospitality, claiming the No. 1 spot for the best overall game-day experience in 2019 and 2020. Now the team is poised to deliver a digital production that matches those accolades and spotlights the passion of Hawks fans.

“We want this experience to be an information hub for Hawks fans to get up-to-date information and analysis delivered in real time by Hawks talent and Atlanta influencers,” says Joe Abercrombie, SVP, live entertainment and production, Atlanta Hawks. “We want this to be a celebration of the Atlanta Hawks, the new additions to our team, and our great city.” 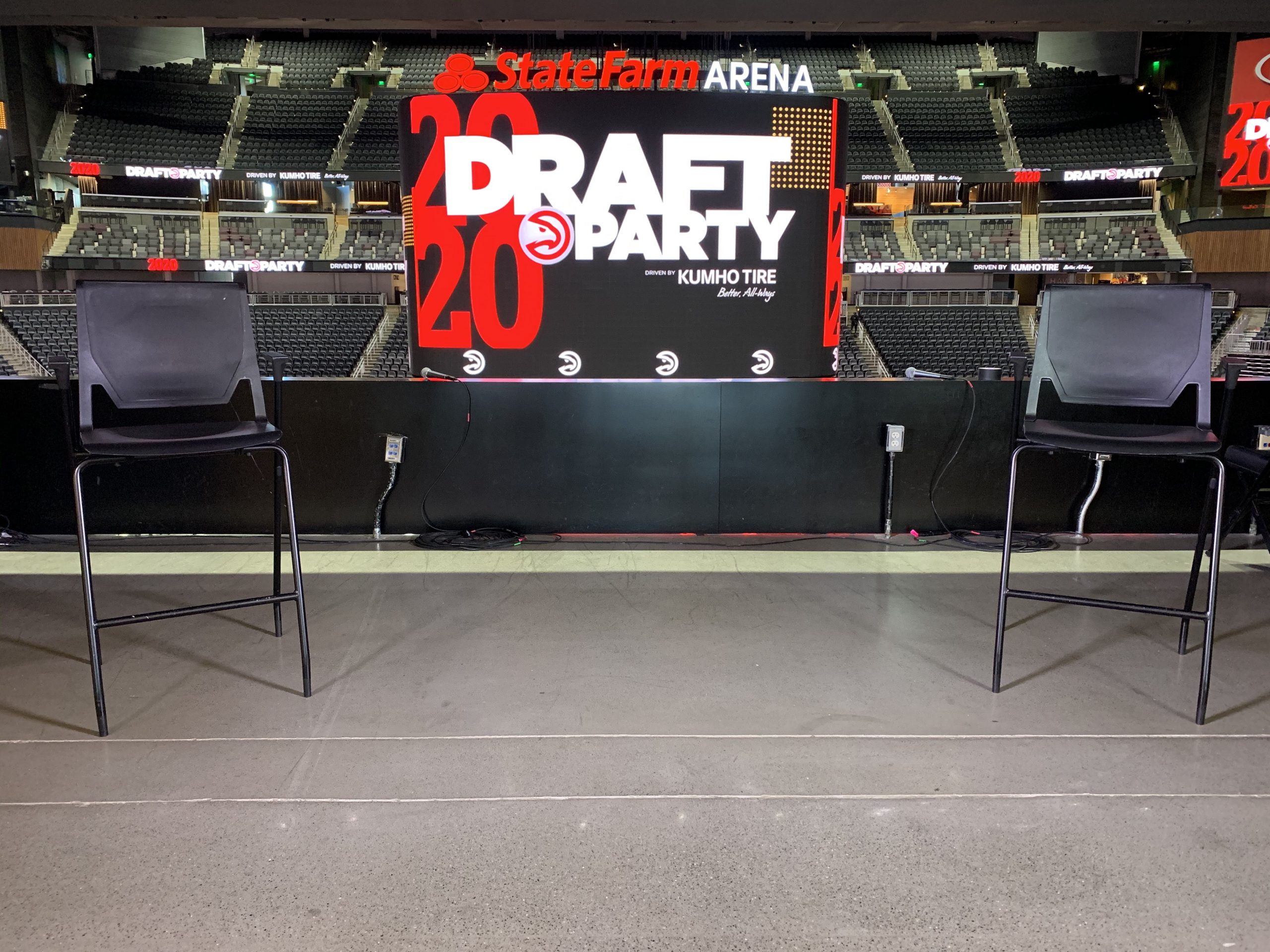 Hosts will be located in State Farm Arena in front of the large centerhung display. Photo: Brett McNeill, Atlanta Hawks

During the Draft, fans will hear from familiar faces before and after the team makes the No 6. overall pick. These voices, including Managing Editor, PeachtreeHoops, Brad Rowland and SportsRadio 92.9 The Game Co-Host, Dukes and Bell, Carl Dukes, will provide real-time thoughts and opinions on moves made and how they impact the team.

“We’ll have a couple of people who will keep an ear out to find out what trades may or may not be happening,” says Drew Frank, manager, game operations, Atlanta Hawks. “Our basketball operations team will also be in the building, and President, Basketball Operations/GM Travis Schlenk is going to hopefully speak with us following our first pick.”

The team is no stranger to second-screen applications. At the end of August, the team’s Instagram platform hosted Draft Lottery All Access Presented by the Georgia Lottery. On a night that decided the fate of the Hawks’ current Draft position, the activation gave fans an opportunity to watch something in unison, but the production team has a lot more leeway to work with during commercial breaks on the regularly televised broadcast.

“From our end, we will essentially have a commercial-free show,” says Frank. “We’ll bring in someone that will talk about specific prospects and rumors being discussed on social media. We’ll highlight the four new uniforms that we’ll be wearing this season [a trio honoring the organization’s storied history and another paying homage to the legacy of Dr. Martin Luther King Jr.]. We’ll also talk about the 40,000 Fulton County residents that voted and the successes that we had as a polling location at State Farm Arena.”

Whether it’s a network or a franchise, Draft Night is all about projections and hypotheticals on where draftees will play next season. While Hawks’ insiders work diligently on finding out who’s going where, the team is compiling B-roll packages of targeted prospects that could be used on the live stream. Based on conjectures, the staff is up to a total of 14 highlight reels. 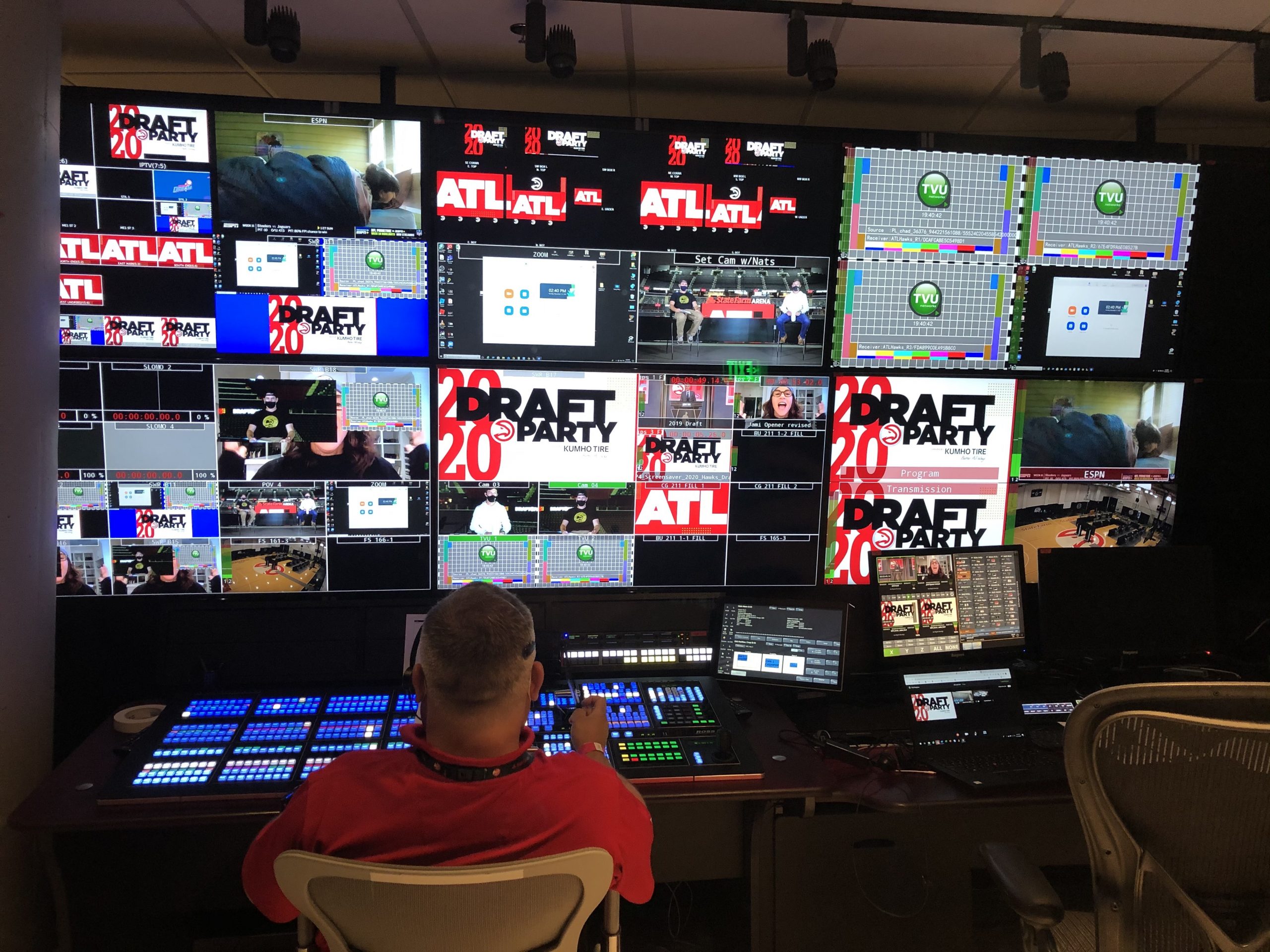 “Draft Night is always a fluid process,” notes Andy Collins, producer/editor, Atlanta Hawks. “We don’t know what’s going to happen from moment to moment, so we’re constantly checking our Twitter feeds to try and be ready for whatever is going to be thrown at us.”

In a season that was temporarily suspended in mid March, resumed in late July, and finished in October, the production team’s content schedule is more off-kilter than in previous years. With the 2020 NBA Draft occurring five months later than usual (the 2019 version was held June 20 in the Barclays Center in Brooklyn, NY) and other notable dates being shifted, project timelines needed to be adapted to fit this new calendar.

“The timing of how everything was announced caused a mad scramble to cover all of our [content] bases,” says Collins. “Free agency in a traditional offseason has always been one of my favorite times of the NBA season, but now it’s kind of condensed.”

The NBA Draft symbolizes a lot of sentiments, but the most obvious is a new beginning for both the collegiate-turned-professional player and the franchise that makes the selection. During a year that has caused so much frustration, heartache, and despair, the Hawks production team aims to use this live stream to bring the greater-Atlanta area a little closer.

“As an organization, we need to stay engaged with our fans because it’s a relationship and we want to find creative ways to keep them connected,” says Abercrombie. “The fear of this pandemic isn’t that we’ll lose fans but that we’ll lose the fandom cadence and routine. With everyone still very isolated, this virtual Draft experience is a great way to give our organization an extra touchpoint.”

Aside from serving up good feelings and a tight communal bond, this virtual event can get fans more excited about the potential of this young team and pumped up for the 2020-21 season.

“We haven’t had basketball since March since we were not fortunate enough to be able to go to the bubble [in Orlando],” says Frank. “This gives us an opportunity to get fans excited about the upcoming season since it’s only about a month away.”