New staff, reinvigorated passion for digital has paid off in spades

Title games were made for elevating barely noticed teams into pillars of folklore, and no program is more suited to the high-stakes College Football Playoff National Championship than the Texas Christian University (TCU) Horned Frogs. A sub-.500 squad last season, the Big 12 Conference team has transformed itself into a formidable force on a national scale. After an extensive overhaul in the offseason, the athletics department’s digital- and social-media effort deploys engaging content to entertain long-time supporters and new fans jumping on the TCU hype train.

“I can’t thank our administration enough for buying into what we’re doing,” says Jason Andrews, director, football creative media, Texas Christian University Athletics. “Our goal is to give access to the team by showing you what’s going on all the time and get you invested in the program in ways that weren’t done in the past.” 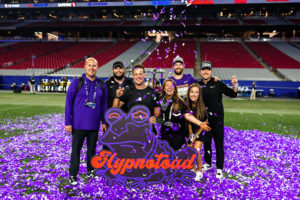 Numerically speaking, with a Fall 2022 enrollment of 12,273 students, TCU isn’t the largest NCAA Division I Football Bowl Subdivision school in the U.S. Knowing that this is the case, the university decided to bolster its social-media presence to not only keep alumni in the loop but also draw attention to its entire athletics portfolio.

On the football side, Andrews was one of the first hires the institution made to reach that goal. Having spent four seasons as senior director, creative media, Southern Methodist University (2018-21); four seasons as assistant athletics director, football operations, Arkansas State University (2014-17); and seven years as assistant director, new media, University of North Carolina (2007-14), he’s a seasoned veteran in this space and well-suited to create this new digital foundation.

“I figured we’d just get our feet wet in Year 1, but here we are playing in the National Championship,” says Andrews. “[The media team has] been able to handle everything that has been thrown at them, and it has been cool to see them flourish under every type of circumstance. Ultimately, you don’t get to do the crazy things that we’re doing on social media if we’re not 13-1.”

You also can’t do the out-of-the-box content that the crew has been doing without the trust of the coaching staff and players. As luck would have it, Andrews made the leap to his current role at the same time current head coach Sonny Dykes left SMU for the purple and white in Fort Worth, TX. After four years of a working relationship with Dykes, Andrews dove headfirst into showing off the behind-the-scenes aspects of the team.

“I knew what we could and couldn’t do,” he says. “I can walk into [Dykes’s] office and ask him to say a certain thing into the camera, and he’ll do it without asking why, because he knows we’re not going to do anything to make the program look bad. All you can ask for [in a coach] is letting you do things that you think are cool and will help build the brand, recruiting, and interest. That all starts with him.”

Along for the Ride: Crew Produces Traditional Social Elements To Provide Access

With Coach Dykes on board, the players were gradually sold on pulling back the proverbial curtain. The signoff has turned into the creation of traditional concepts, such as uniform reveals (most notably, the blood-red fit for the Oct. 15 game vs. No. 8 Oklahoma State and ice-white motif for the last-second road win over Baylor University on Nov. 19), postgame celebrations with singing and dancing, and long-form series like TCU Football: Carter Boys in partnership with ESPN+. Formatted similarly to HBO’s Hard Knocks, the series ratchets the promise of putting fans into the perspective of a player to an entirely new level.

“We’re taking you into team meetings and miking up coaches and players during practice,” says Andrews. “If you see sophomore safety Bud Clark make an interception, you know that he’s the guy from Louisiana that dances well and not just No. 26. It took the players a little while to get used to that, but I think our fanbase immediately loved it.”

Cinematic, short-form videos have made it into the mix as well. The most prominent is pairing The Drifters’ classic tune “This Magic Moment” with scenes from the field after the team’s win vs. the University of Michigan in the 2023 Vrbo Fiesta Bowl:

Tactfully using similar shots from the confetti celebration, the crew poked fun at College Gameday’s unanimously choosing the Wolverines to head to the City of Angels:

As for still images, the program’s various platforms are showcasing stunning visuals for pregame, during the game, postgame, and special moments throughout the year, including this one commemorating its selection into the College Football Playoff as the No. 3 seed:

One of the highlights of the season, for both the program and Andrews, was the Heisman Trophy chase by senior quarterback Max Duggan. He had received other top honors — the Davey O’Brien Award, Johnny Unitas Golden Arm Award, Big 12 Offensive Player of the Year, First-team All-Big 12, Second-Team All-American — but the most coveted award for any college football player was still on the table. Fans in the Dallas metropolitan area and passionate followers of the Horned Frogs know that Duggan has committed his entire four-year career to the university, but many don’t know his story or what makes him tick. This video, narrated by TCU’s all-time leading rusher and Pro Football Hall of Famer LaDainian Tomlinson, summarizes Duggan’s character and class:

“That’s Max Duggan in a nutshell,” says Andrews. “He’s the embodiment of what you want your kid to be, and he means so much to TCU and our community. Creating that Heisman push for him was the most rewarding thing we did all year.”

Along with an insider’s vantage point of the team, Andrews and company have also cooked up off-the-wall material that has become their M.O. It’s all a product of the Hypnotoad: the alien-like frog that debuted on the hit animated series Futurama in 2001. With the Horned Frog a very distant relative, the players have latched onto their own Hypnotoad as a symbol of this wild and unforeseen ride to Monday night’s matchup in Los Angeles. To keep the good vibes going, the Hypnotoad made the trip west to SoFi Stadium. Developed by Petrie, weekly victory videos have captivated the sports world, and while they serve a purpose, the memes have a massive touch of spontaneity to them.

“We talk about those before games,” notes Andrews, “but we joke that, a lot of times, it’s like jazz: we don’t really know what’s going to happen, but we start making them and then kind of see where they go.”

The improvised, yet concise mentality has turned into social-media gold, including “Horns Down” vs. No. 18 Texas, “Techno Win” vs. Texas Tech, “Got Frogged” vs. then-No. 17 Kansas State, “Just Bearly” vs. Baylor, and, more recently, “Got Milk” vs. No. 2 Michigan:

Feedback and meetings are the genesis for these ideas, but a well-organized team armed with reliable equipment makes TCU social a powerful player in the collegiate landscape. Given special access into the team locker to store gear and on-field permission to capture video and photos, the staff has established surefire workflows that allow it to send content to the masses. Ensuring that all areas of play are covered, from the sideline to the end zone, they work collaboratively to get the job done. 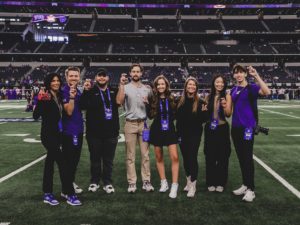 As for technology, the team is leveraging a variety of gear. Video is shot via three Sony FX6’s and a handful of Sony α7S III’s; on the photo side, two Sony α9’s and a Sony α1 are in the rotation. Projects are edited on a central server within Adobe Premiere Pro.

“We basically create one team project for each game and insert subfolders for elements like player spotlights,” says Andrews. “The workflow is a bit different when we’re on the road or in Los Angeles for the National Championship.”

From offseason workouts in the summer to shocking the world in the Fiesta Bowl, it has been an unprecedented four months. Whether it was comeback triumphs against a trio of opponents or possibly not getting into the Final Four after a defeat in the Conference Championship, the normally cliché term of special certainly applies to this group of players. For Andrews, the 2022-23 campaign is the affirmation of a career-altering decision, and, for his crew, it’s the testament of doing their respective jobs with the utmost skill.

“If you had told me a year ago, when I left SMU to come to TCU with Coach Dykes, that we’d be playing in this game for the national championship, I would’ve said you were crazy,” he adds. “Our job as creatives is to tell stories, and this team deserves for their story to be told.”