CFP National Championship 2023: University of Georgia Digital Hypes Up Bulldogs Fans for Another Run at the Title

Getting to the College Football Playoff (CFP) National Championship is a difficult task, but getting there twice in a row is harder. Like the team on the field, the football program’s creative-services team is sticking with what works: a plan of attack on social media that maintains the core message from last year’s title-winning squad but adds passion from the fans who believe the team can become the first back-to-back champions in the eight-year history of the CFP.

“The overall blueprint has stayed the same from last season to this season,” says Chad Morehead, co-director, football creative, design, University of Georgia, “but we have tried to be more interactive with our fans and other media outlets this season. Social-media platforms have also taken steps to be more collaborative across profiles, and we also try to keep our content fresh with a new look and feel.” 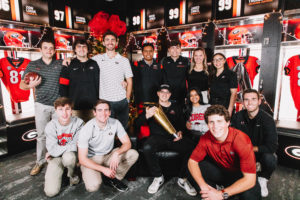 The University of Georgia has two significant things in its favor: a large alumni base and a brand that resonates with college-football fans. Numerous graduates have gone on to make a name for themselves in the National Football League. Some of these active players are Los Angeles Rams quarterback and Super Bowl champion Matthew Stafford, Kansas City Chiefs wide receiver and Super Bowl Champion Mecole Hardman, and Baltimore Ravens linebacker and 2022 NFL Pro Bowler Roquan Smith.

Leveraging talent like this as well as Instagram’s collaboration feature, the program is extending its voice to followers of other highly followed accounts. For example, the university and the Atlanta Falcons teamed up for a post with linebacker Lorenzo Carter after the Bulldogs defeated No. 4 Ohio State in the 2023 Chick-fil-A Peach Bowl in Mercedes-Benz Stadium:

As for brand recognition, the creative-services team is highlighting the hard-nosed style of play on the defensive side of the ball. Tapping into the legacy of the Savage Shoulder Pads, which a defensive player wears after causing a turnover, the artwork displayed on social media has embraced this specific piece of iconography. Last year, it was placed in front of the murals of Miami’s Wynwood Walls. This year, the pads have made an appearance in front of the famed Hollywood Sign:

Just like a prized boxing match or a movie premiere, the material surrounding the main event is half the excitement. Articles are written for in-depth analysis, but fans looking to get their blood pumping flock to the team’s various social-media outlets. Throughout the season, the staff was committed to developing weekly pregame trailers that would encapsulate the thoughts and feelings of the fan. Each one- to three-minute trailer is specific to the opponent and narrated by a notable voice. The conference opener vs. South Carolina on Sept. 17 offered senior running back Kenny McIntosh, Week 4 vs. Kent State on Sept. 24 featured sophomore linebacker Jamon Dumas-Johnson, and the regular-season opener vs. Oregon on Sept. 3 feaured senior quarterback Stetson Bennett:

Not only are current players conveying the real-time aspirations of the program, but gargantuan network of alumni are lending their time to these projects: for example, CFP National Champion and Jacksonville Jaguars linebacker Travon Walker vs. then-No. 1 Tennessee on Nov. 5, NFL running backs Nick Chubb and Sony Michel for the SEC Championship vs. LSU on Dec. 3, and WWE Hall of Famer and former defensive tackle Bill Goldberg for the Chick-fil-A Peach Bowl on Dec. 31. On Sunday, Jan. 8, the team dropped its most recent trailer, with National Championship-winning head coach and former Athletic Director Vince Dooley — who died in October at the age of 90:

Aside from video, the program’s digital presence includes high-quality photography and, sometimes, a little bit of hijinks. Much skill is required to create engaging content that is pleasing to the eye, but the most popular post of the year, receiving the highest amount of interaction, happened on April Fools’ Day. Some teams accidentally break their respective trophies during victory celebrations, and capturing the attention of publications like Sports Illustrated, the Twitter account joked that the team had broken the CFP National Championship trophy it received after defeating the University of Alabama last season:

“We had a miniature version of the trophy that was only about 6 in. tall but was made of metal and looked very authentic,” says Morehead. “We managed to break it apart and stage a photo, so our fanbase had a good time interacting with that post.”

Covering the team’s run to the title game, the staff combines a keen eye for beautiful photography with stunning graphic design. For the former, the picturesque nature of the Santa Monica pier and the surrounding area of Los Angeles has provided ample backdrops for these photos:

For the latter, the Hollywood Hills, SoFi Stadium, and other locations in the city are being tied together with star players on the roster in eye-popping pregame graphics:

“Our department would be nothing without our incredible students,” says Morehead. “They produce an incredible amount of content each week between social-media videos and recruiting content.” 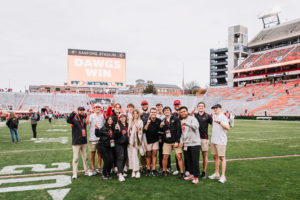 For Monday night’s championship game, the team will be split into two crews: one in Los Angeles and one on campus in Athens, GA. Eight individuals — Morehead, Eldridge, Bernardo, Schwartz, Lopez, Cravens, Collier, and Walters — will be at SoFi Stadium, and a team of student interns will be in Georgia. As has been used all season, their tech arsenal includes a collection of cameras, lenses, and drones. Video is recorded via a handful of Sony PXW-FS7’s, and stills are captured with two Canon EOS 5DS’s, one Canon EOS-1D X, and personally owned cameras.

Although surefire technologies and a dedicated staff are the main drivers for the production, none of it would be possible without the cooperation of the players and coaches and their trust in the media team. Fans have been given a look into what it’s like to be a Georgia Bulldog.

“Our athletes are extremely receptive of having our team around and capturing content, now more so than ever, in a world of NIL,” says Morehead. “Having our staff there to capture content to assist our athletes in growing their profiles and achieve their journey in college continues to put our university at the forefront of social and digital.”

After a full year of hard work, the metrics back up the crew’s tenacious mentality: the second–most-interacted-with college-football account has logged more than 21.4 million interactions across Facebook, Twitter, and Instagram; an increase of 5.7 million interactions from 2021 to 2022; and more than 235,000 new followers across all three platforms. Besides the numbers, success can be measured by the jobs that the crew’s recent graduates have been offered and accepted, including positions with AthetesFirst, Fresno State University Football, and the Las Vegas Raiders. Heightened numbers may be the most important element to some, but, for Morehead and his colleagues, supplying a platform for creativity and opening doors for the next generation of social-media professionals are the best aspects of their jobs.

“The ability to develop our young and talented students and put them in positions to graduate and accept high-level jobs directly out of school continues to be a point of pride in our department,” he says. “It goes to show how hard our students work and make the most of the opportunities we are lucky enough to provide them to further their careers.”