150+ mics, real-time remote commentary will be part of the mix

The Daytona 500 hits the track on Sunday, four years after the opening of Daytona Rising, NASCAR’s $400 million reimagining of what a stock-car racing venue can look like. When the fans aren’t in the Daytona International Speedway’s 101,500 seats, they can enjoy a level of fan engagement that Fireball Roberts and Junior Johnson never dreamed of, including the UNOH Fanzone, where windows into the garage allow fans to watch race teams at work.

All the more reason that Fox Sports’ Daytona 500 coverage continues to refine its game, emphasizing the audio from the loudest sport on earth to engage viewers.

Starting with qualifying runs earlier in the week and the Can-Am Duel at Daytona on Thursday — part of Fox’s approximately 100 hours of multiplatform programming — A1 Kevin McCloskey and submixer Chip Weaver are working from Game Creek’s Cleatus truck to balance more than 150 microphones on the track, on cameras, in cars and crews, and, new for this year, on cranes positioned at Turns 1 and 2, to create a mix unlike any other on televised sports. Much of that will also be heard on “Crank It Up,” the SFX “drum solo” that Fox inserts at some point during the race, made up of a live mix directly from Weaver’s Calrec Artemis submix console sent through McCloskey’s main mix, which has been done in surround for most of the century.

“There is nothing better than ‘Crank It Up,’” says McCloskey, who is about to embark on his sixth consecutive turn as A1 on the show. “It has become the signature sound of NASCAR on Fox. In the last few years, we’ve experimented with putting some of the radio chatter into it. It adds another flavor to it.”

Another wrinkle, introduced last year, will be real-time commentary by experts Larry McReynolds and Jamie McMurray from the bespoke-constructed multipurpose virtual-studio set housed in the Fox Sports studios in Charlotte, NC. 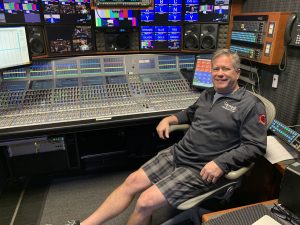 On Sunday, Kevin McCloskey will serve as A1 on his sixth consecutive Daytona 500.

“The audio from Charlotte, where they also do the pre- and post-race shows from, is coming in over fiber, which gets transferred to MADI for us,” McCloskey explains. “There is, like, zero latency: [when] Larry and Jamie interject, it sounds like everyone is in the same booth.”

Crew and driver chatter are also more present this year. In-car audio from all 38 cars and their pit crews is collected by Racing Electronics, which was acquired by NASCAR parent International Speedway Corp. in 2018. That is transported to the radio-broadcast studio in the Cleatus truck, where radio submixer A1 Mark Williams operates the Calrec Brio console over a fiber cable and radio editor Jeff Bratta is using a dual editing system with two Mac Minis and PreSonus Studio One 3 edit software to convert audio to USB for the computers.

McCloskey says the plan is to bring more of that sound into the television mix, some of it live with a 1.5-second delay but much of it through a special audio-editing unit created solely for driver-to-crew-chief communication. The unit takes the digital RF communications through an analog output to play back live interaction and get it to air within 30 seconds.

The Roar of the Crowd

There will be more than 100,000 fans in the stands, and the venue itself is wired for sound with 2,791 loudspeakers covering the huge back of house, plus 295 Community Sound R.5 and R.2 series speakers facing the track from atop the nearly mile-long grandstand. However, McCloskey notes that the crowd sounds that make up much, if not most, of the sports-broadcast mixes are heard only just before the start of a NASCAR race and just after it ends.

“Once the race starts,” he says, “you’ll never hear the crowd no matter how big it is. Those cars are just too loud.”

Stay tuned for more of SVG’s live coverage from Daytona throughout the weekend at sportsvideo.org