NOTE: This video interview was conducted prior to the return of fans on Tuesday, Feb. 16 vs. the Toronto Raptors.

The NBA bubble in Orlando was a four-month stretch unlike any other in sports-video-production history. It not only tested the technological means of the league, but also the fortitude of its participating franchises. One particular organization, the Milwaukee Bucks, took notes while they were in the Sunshine State and is using last summer’s blueprint to produce regular seasons contests in Fiserv Forum.

“Being on the ground and behind the scenes was an immense help,” says Johnny Watson, executive producer, arena & event presentation, Milwaukee Bucks. “There were a lot of takeaways from that experience that I brought here.” 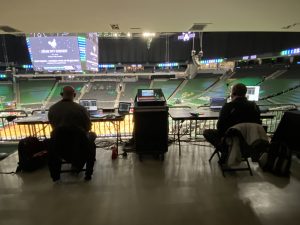 Audio operators at their positions in Fiserv Fourm.

When select production teams made their way to Orlando, they understood that they would be producing a different type of event without fans in the building. The scrimmages, play-in games, and postseason tested their creativity, and the environment took some time to get adjusted to.

“We went from 17,000 fans to nobody in the building, so it was a shock to the system in a lot of ways,” says Watson. “We needed to acclimate ourselves and get used to the new forms of cues, timing, and how to communicate with each other. I was able to produce content for 21 other teams, so I spoke with other game directors and learn their philosophies. It was really fascinating to see their thought process on prompts and content.”

Not having fans in the stands was the hardest challenge, and in the bubble, these crews were responsible for bringing the energy of a typical playoff game. Working alongside colleagues from other teams, Watson cultivated these skills to bring these contests to life and become familiar with tools that are used in the current regular season. The most notable workflow has been Firehouse Productions’ fake crowd noise equipment. 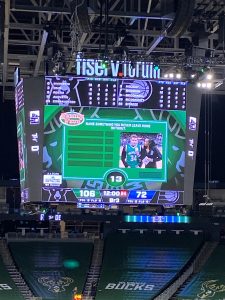 Flashbacks are one of the many elements being played on the videoboard.

“It was kind of fun to get to know the people who created that software and implement it with success,” he adds. “We were lucky enough to have our DJ, DJ Shawna, down there and she was one of four DJs in the bubble. It was a huge learning experience and an incredible success story for the NBA to pull off.”

Prior to the fan’s return on Tuesday night, the Fiserv Forum had a unique production strategy for the first 27 games. Players, coaches, security, and in-venue personnel have been the only viewers inside of the building, and content shown on the videoboard catered to those groups. Aided by Daktronics Systems Technicians Joe Frost and Brin Riley on the technological side and Director, Game Presentation and Sponsorship Activation Pat Longo on a content side, players on the court have been able to see game-related material has been a huge priority.

“Our primary goal is to cater to our basketball team, so we’ve had a lot of meetings with them to discuss our philosophy,” says Watson. “When it comes to the videoboard, we’re pushing an overload of replays. Players are also seeing statistics on displays where we would typically have sponsors. We have more statistics than we’ve ever had. Just so if the coaching staff needs to see something, more regularly it’s there.”

Similar to previous seasons, Bucks fans have been the main source of excitement and main audience for entertainment at Fiserv Forum. Packed crowds and antics from spectators have been highlighted during timeouts and pauses in play, and with a large number of seats still remaining empty, the videoboard has become the destination for flashbacks of halftime performances and fan activations.

“We’ll have one of our hosts do a fun intro, and then roll a video of something that we did in years past,” continues Watson. “We also have our fans on NBA League Pass that are watching, so we can stream some of these fun things for them, too.”

Justin Garcia sits on the set of Courtside Live.

With a majority of fans still watching the Bucks from the comfort of their home, Watson and company are still producing digital-first content that sets the table for the upcoming game. In conjunction with the team’s local regional sports network, Fox Sports Wisconsin, Courtside Live has become a second-screen experience to entertain fans prior to the start of the linear broadcast. Spearheaded by Director, Live Programming & Entertainment Kate Ulrich, the 90-minute live stream goes through a handful of topics.

“It’s a full pregame show that uses one of our radio play-by-play commentators, Justin Garcia, and one of our in-game hosts, Melanie Ricks,” says Watson. “While the players are warming up, we’ll go through statistics, trends, and fun facts about them. We also get into some fun things with our mascot like trivia, contests, and games. We’re trying to give fans opportunities to get unique access inside of the building and we’ve had a really positive response on our social platforms.”

During every home game, the production staff is producing two shows (Courtside Live and the traditional in-venue show) every night. Even with some fans inside of the building, there seems to be no signs of stopping this digital endeavor until all fans are back into Fiserv Forum.

“I think we’ll keep doing this because we might not be able to have everybody come back right away,” he admits. “We’ll continue to develop more content and keep people engaged and involved with what’s going on with the team.”

The Ones Who Get It Done: Notable Names of Bucks’ Production Team 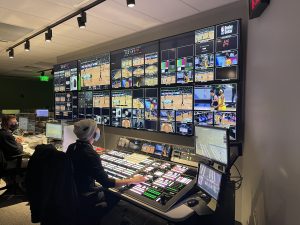 Inside of the control room during Bucks vs. Pacers on Feb. 3.

Now in its third season, Fiserv Forum is a venue that is consistently staying at the forefront of technology through the work of Director, Broadcast Technology Ken Barski and Broadcast Engineer Steve Sokolovic. Along with Ulrich, Director of Multimedia Productions Matt Morell and the rest of the Live Programming & Entertainment team (Coordinator Allie Stevenson, Entertainment Coordinator Tim Riordan, Manager Brian Begley, and Entertainment Associate Ryan Kiser) are facilitating responsibilities up in the control room. With updated technology and a hard-working crew, the organizational culture led by GM of Operations Dennis Williams and CMO Dustin Godsey is the driving force to entertaining fans in the Cream City.

“I think that’s really important to what we do here,” concludes Watson. “We have fun working together and it’s been a really enjoyable experience.”

After a day off, the Milwaukee Bucks will host the Toronto Raptors at Fiserv Forum on Thursday, Feb. 18 at 7:30 p.m. ET.