Traditionally, the Super Bowl is one of the ultimate fan destinations in sports. For obvious reasons, this year’s Big Game has a quite different feel.

With only 25,000 fans permitted to be in attendance for Super Bowl LV at Tampa’s Raymond James Stadium on Sunday and few tourists traveling to the event’s host city, CBS Sports needed to reconsider its plans for the scale, scope, and positioning of its onsite studio sets designed to support programming for the network’s four-hour pregame celebration on Sunday afternoon. 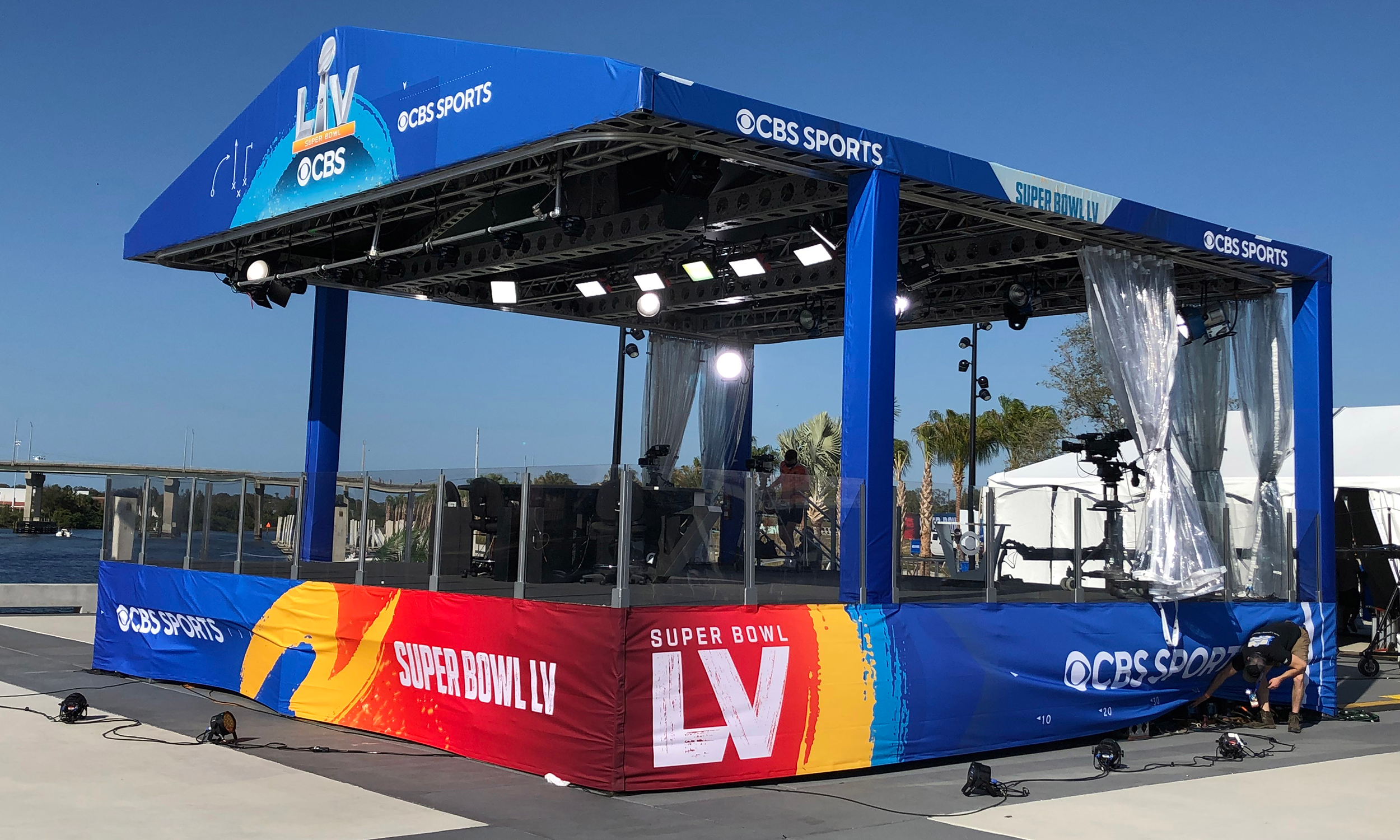 Super Bowl Today will kick off CBS Sports’ coverage of Super Bowl LV beginning at 2 p.m. ET. The primary pregame on-air crew of James Brown, Phil Simms, Bill Cowher, Nate Burleson, and Boomer Esiason will be broadcasting from a set positioned on the main concourse on the end of the stadium opposite its iconic pirate ship. Set-design company Jack Morton completely wrapped the set to prepare it for air.

In addition to the set inside, CBS Sports has a large set positioned outside the stadium. There are also numerous standup positions from which various talents will file reports.

“It’s an amazing setup in Tampa,” says CBS Sports Executive Producer/EVP, Production, Harold Bryant, who is working his eighth Super Bowl with the broadcaster. “We have gorgeous sets for our pregame crew, and we are going to capture this special Super Bowl. It has been an incredible experience. Many of the pieces [that have been produced for the pregame show] were done contact-less, and it still maintains its professional level. I tip my hat to our entire crew.”

Among the preproduced pieces that CBS brass are most excited about are a piece narrated by Academy Award-winning actress Viola Davis on the story of Kenny Washington, the man who re-integrated the NFL (it was produced by Pete Radovich, Ellis Williams, Jelani Rooks, and Derek Ambrosi and written by Kayona Ebony Brown) and a celebration of the 30th anniversary of Whitney Houston’s iconic rendition of “The Star-Spangled Banner” at Super Bowl XXV (produced by Shawn Robbins and Niya Walker).

“THE SUPER BOWL TODAY” Celebrates the NFL’s Past and Present with Special Features and Interviews Leading Up to Kickoff of SUPER BOWL LVhttps://t.co/47c1c9Jiyt

In addition, CBS Sports Chairman Sean McManus teases that he is particularly excited about the game’s tease that will air at some point close to the game’s opening kickoff. “This has been a complicated year for us, as it has been for everyone. Getting shoots and interviews done across the country has been a challenge, but I’m very proud of what our team has accomplished.”

As for onsite facilities, the sets are more strategically positioned with much less incentive — given the game’s limited attendance of 25,000 — to have a presence out among the fans.

CBS Sports’ pregame efforts are marked by a commitment to kid-centered programming.

“Our broadcast of the NFL Wild Card game was undoubtedly one of the greatest moments in Nick’s history,” said Brian Robbins, president, ViacomCBS Kids & Family Entertainment, in an official release. “The enormous positive response shows how big an appetite there is for a kids- and family-oriented sports production like ours. Given all that enthusiasm, it feels really good to team up again with everyone at CBS Sports and the NFL with pregame coverage and digital highlights that bring fun and slime to the biggest football game of the year.”

In addition, CBS’s pregame show, Super Bowl Today, will feature a specially produced segment of Nickelodeon game show Unfiltered, with Green and Lumpkin trying to guess the virtually disguised identity of an NFL player. A “Nick-ified” highlights package will also air as part of CBS’s halftime coverage of the game.

“The Nick-ified elements in our pregame and halftime programming,” adds McManus, “along with the second-screen digital and social highlights, will be the perfect complement to CBS Sports’ first-class broadcast of Super Bowl LV, allowing us to reach an even wider audience on Super Bowl Sunday across a variety of platforms as we continue to showcase the power of the ViacomCBS family.”